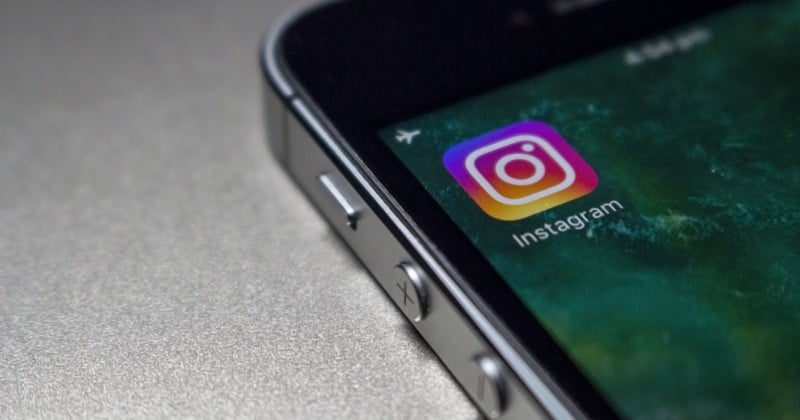 Photographers join photo-sharing sites for a variety of reasons. Sometimes it’s as simple as a need for recognition and the occasional pat-on-the-back. In fact, I suspect that’s the reason most people join these sites in the first place; a little bit of recognition is worth big dollars in the feel-good bank.

Sometimes they join those sites to promote their work for financial reasons, either to sell prints or services. In the post-Instagram era, I suspect that many people join in the hopes of growing a sizable enough audience to attract sponsors… and maybe trips and cheap booze.

Whatever the reason, the simple fact is that once you started posting, you are in competition with every other photographer on the site. Whether you like it or not, your photographs are judged alongside those of the entire membership—rank amateurs and seasoned pros alike. The aim of the game is to get your photograph in front of as many eyeballs as possible and that means playing the like-you-like-me game, getting involved, interacting, posting comments, replying to discussions… you know the drill.

But what if I was tell you, Neo, that you were doing it all wrong, that many of the people you thought you were competing against in this photographic game of life were not honest photographers working hard to get their photos seen? What if I was to tell you that this playing field is not only hilly as f**k, but littered with the spent corpses of a thousand disillusioned photographers?

Hmmmm? Take the Red pill, Neo, and follow me down the rabbit hole.

How to Win Bots and Influence People

Right now, at this very second, an army of bots, scripts, and hacks are hard at work on all of your favorite social media and photo-sharing sites.

These tools come in a wide variety of formats, from simple macro-based scripts, to polished commercial apps, all the way up to cloud based services with slick websites and monthly subscriptions. If you’ve ever wondered how some people seem to suddenly bloom in popularity, seemingly out of nowhere, then the odds are that they’re using one of these commonly available tools. 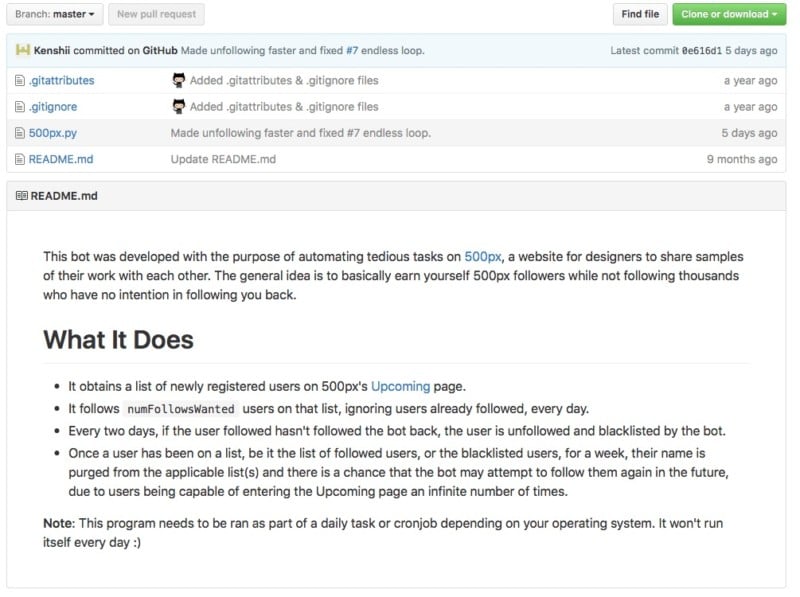 Like most social engineering, the techniques employed by the designers of this software relies on the way that we humans interact with such social sharing sites. They work by blowing smoke up your arse and making you think that someone 1) liked your photo, 2) thought so much of it that they took a minute out of their day to comment, or 3) loved it so much that they shared it with their friends.

Feeling the glowing warmth of that smoke, you of course reciprocate and like, comment, and share back, because that’s the nice thing to do and you’re a nice person. Well, sorry mate, but the odds are that the vast majority of times this has happened to you, you were giving a bot a hand up.

If you’re a minor league photographer with a couple of hundred or thousand followers, even if you’ve just started out, the traffic you’re seeing on your photos will have been grossly inflated by artificial likes, comments, shares and follows. Sorry to burst your bubble, but it was the Red pill you swallowed, not the fingers-in-ears Blue pill.

Don’t choke on it, we have more to discuss.

Let’s start with one of my personal favorite sites (heavy sarcasm) 500px. I wrote an article about 500px, five years ago, and it continues to be the most viewed article on this site by some margin. One of my complaints about the site was that photos were being up-voted irrelevant of quality. I don’t know why I didn’t see it at the time, but it’s obvious to me now—this is the result of heavy bot usage. 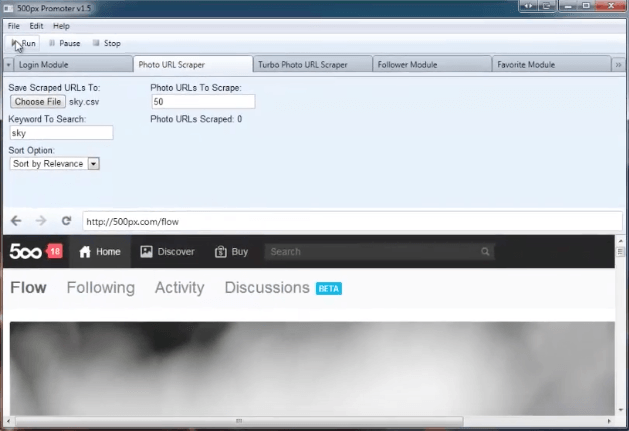 You can get a wide variety of tools to improve your standing on 500px. Why not begin a simple new user bot. This Python script available for download on Github will “automate the process of following new users on 500px.com.” That’s right, just fire up this little script, let it loose with your account, and before you know it you’ll be racking up the reciprocal follows from guileless punters.

For a more sophisticated tool, how about we check out our old favourite Flickr? Admittedly having a popular presence on this site is nowhere near as useful as the same thing on Instagram, but it’s still a helpful thing to have.

Our Bot Who Art in Heaven

Such is the sophistication of the modern popularity bot that these days you can buy yourself a subscription to a cloud based service. These are particularly popular with Instagram users looking to increase their fanbase and not prepared to, like, be good at taking photographs.

Over at Instagress they’re not hiding their light under a bushell—in fact their front page proudly claims that their tools can:

Accelerate your life on Instagram for more targeted likes, comments and follows

For a very reasonable $10 a month, their cloud-based services enables you to:

Create a small robot clone of yourself with the same interests and style, and then let it work for you on Instagram

All the goodness, none of the calories friends. Or how about Gramista – it’s four times the price of Instagress, but they do promise that:

Gramista will automate liking, following, and unfollowing just like a human being would.

That’s right, not only will their product pointlessly follow people in a shameless effort to boost your own flagging viewer numbers, but they will also unfollow you if you don’t return the favour! It’s hilarious isn’t it.

Over at RoboLike, for a commendable $13.99 a month you can automate both your Instagram and your Twitter interaction. The team say that:

With the Robolike Instagram auto bot coming in at around 80 likes per hour and Twitter auto bot at 60 per hour, you get way more exposure to your account then you can do alone. Put your thumbs to rest and let us do the liking for you.

You’ve probably heard about the digital sweatshops in Asia and Africa where a small army of impoverished mouse-clickers will descend on your Facebook page and shower you in utterly meaningless likes, all for the price of a Satsuma. Well, I’m guessing that the move to fully automated systems is bad news for the Mumbai economy. Or maybe all those click-farmers have transitioned into the far more lucrative encryption-ransom and fake-Microsoft-support games now. It’s important to keep your portfolio fluid, after all.

Over at MonsterSocial (“Undefeated for more than 3 years. Our 2000 customers can’t be wrong!”) they claim to be:

These guys will let you automate every element of your social media presence. Check out the video below where a dude walks through the whole process of farming likes using stolen or fake Facebook accounts.

I know, right? And if you’d rather not entrust your accounts to a cloud based service then there are many software companies producing apps to help your accounts out of the no-friends doldrums. At BoosterBots they will sell you software to fake your popularity on 500px, Behance, Cafepress, eBay, Instagram, Etsy, Facebook, Pheed, Pinterest, Redbubble and Twitter.

So by now you’re probably thinking something along the lines of, “F**k it, if everyone’s doing it, then count me in too.”

And that of course is entirely your prerogative. If you wish to engage in the like-follow-share tennis match being played between these armies of bots, then go right ahead. You may want to consider the possible ramifications of using these bots though, should you get caught. 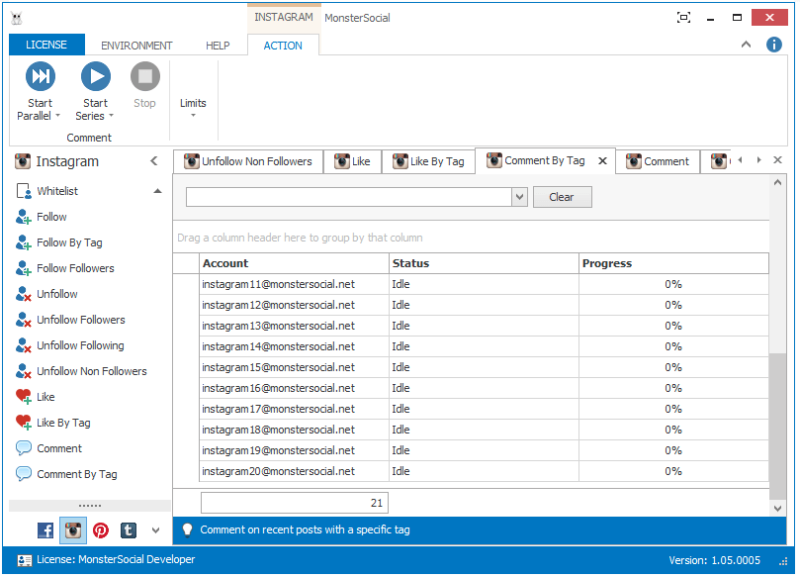 All of the social media and photo sharing sites have policies about this sort of stuff. For instance Twitter has this to say about automated following and unfollowing:

You may not use or develop any application that allows for the following or unfollowing of user accounts in a bulk or automated manner. Accounts and applications that engage in this practice will be suspended.

We prohibit crawling, scraping, caching or otherwise accessing any content on the Service via automated means, including but not limited to, user profiles and photos.

Again, that is pretty clear.

Will you get caught if you use these services? If you’re careful, probably not—there are way too many of these apps, hacks, crack and cloud services to suggest that people are getting systematically banned as a result of using them.

I certainly know from my own Instagram account that I pick up bot-rendered comments generated from a script by someone with the imagination of a carrot. The truly unimaginative ones are the guys who just put a smiley emoji in there. Like their brain capacity doesn’t stretch as far as adding the word ‘Nice’ or ‘Great’ before that smiley. Hey look everyone, Nikkos the Mobile Car Detailer from Hungary just said ‘Great :)’ on my photo—it couldn’t possibly be a bot.

Now the guys over at 500px reckon they’re ahead of the curve. In a recent blog post they said:

We have automated systems in place that tell us if you’ve somehow liked 1,000 photos in 3 hours. Or left the same “V F” comment on 100 photos in the last 10 minutes. Bots beware, our ban hammer is hovering right above your automated heads… ready to drop.

To which I say, like hell. These systems can, if used correctly, perfectly imitate the behaviour of an actual human and I defy the 500px development team to prove otherwise.

Yes, some jerk liking 1,000 photos in a couple of hours might attract attention, but someone with a decent enough comment script, with the common sense to like only about 50 photos an evening, with the chops to turn the wretched script off occasionally so that the pattern appears sort of random—you’re not catching them.

Is there a solution to all this nonsense? Of course not. As soon as the number of followers you have became a monetisable asset, it was going to be abused.

You can pick up small-scale sponsorships with as few as 5,000 followers on Instagram these days and at 50,000 you’ll be getting flown to exotic locations and have ‘samples’ appearing in your post. So why would you not try and game that system and get a piece of that corporate sponsorship money? Unfortunately, that makes a mockery out of the entire system, its most popular content (even if it is legitimate) tainted by the stink coming from the shots that have been gamed to the top.

And I’ll tell you something else too: it’s only going to get worse.

About the author: Andy Hutchinson is a photographer and journalist based in South Coast, New South Wales, Australia. You can find more of his work and words on his website, or by following him on Facebook and Instagram. This article was also published here.