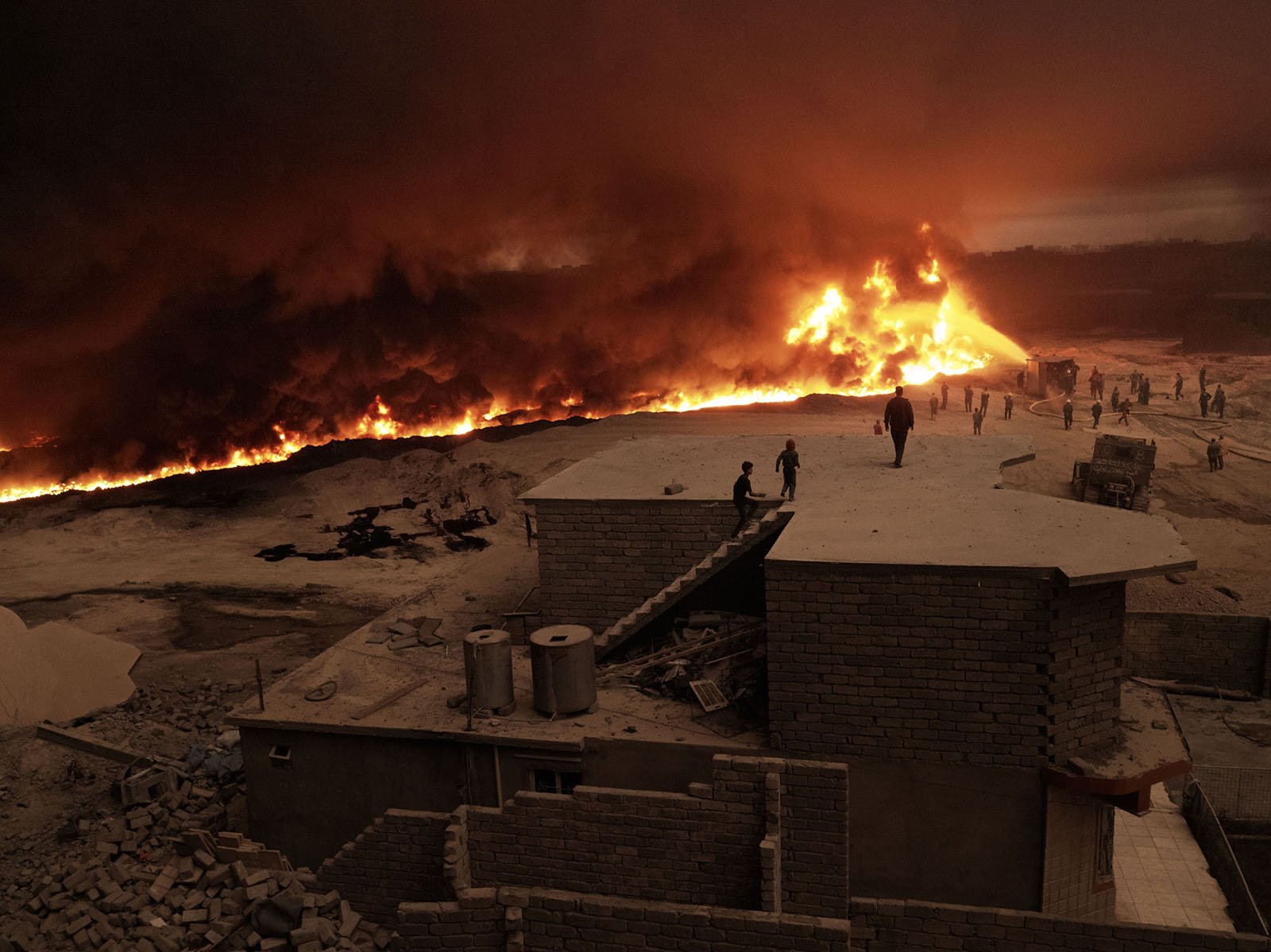 When world-renowned photographer Joey L. reached out to PetaPixel about his latest project, I didn’t expect to see photos of burning oil wells. But that, alongside some powerful portraits, is exactly what was waiting for me.

In October, Joey flew to Qayyara, Iraq to capture these striking photographs for the British NGO Oxfam. He turned down three different commercial projects because these kinds of photos—images that can make a real difference for real people—are why he became a photographer in the first place.

The photo essay has since been published in The Sunday Times Magazine, and already Oxfam’s campaign to raise awareness about this environmental and humanitarian tragedy has seen results. 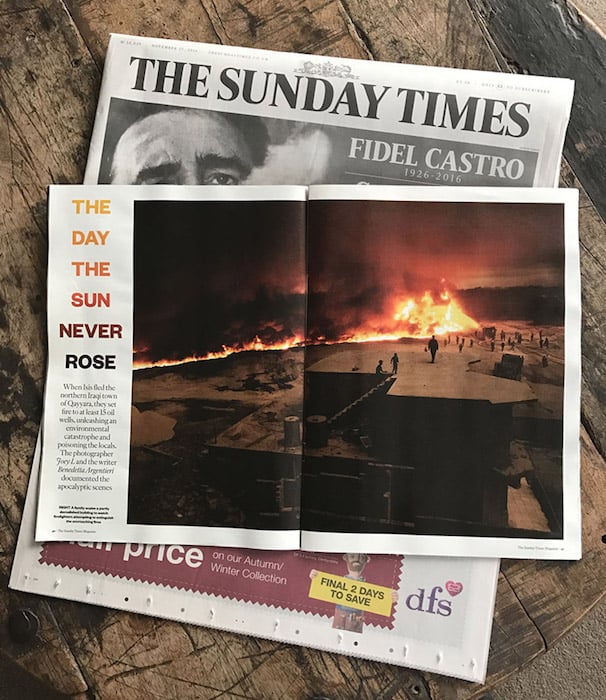 The photos hit you… hard. By combining the broader aerial perspective with intimate portraiture, both the scale of the tragedy and the fact that these are real people’s lives in danger become inescapable.

We wanted to find out more, so we sat down with Joey (digitally speaking) for a quick Q&A after seeing his photos and reading Benedetta Argentieri’s account of their trip. Scroll down to dive into the why, how, and what behind this incredible imagery. 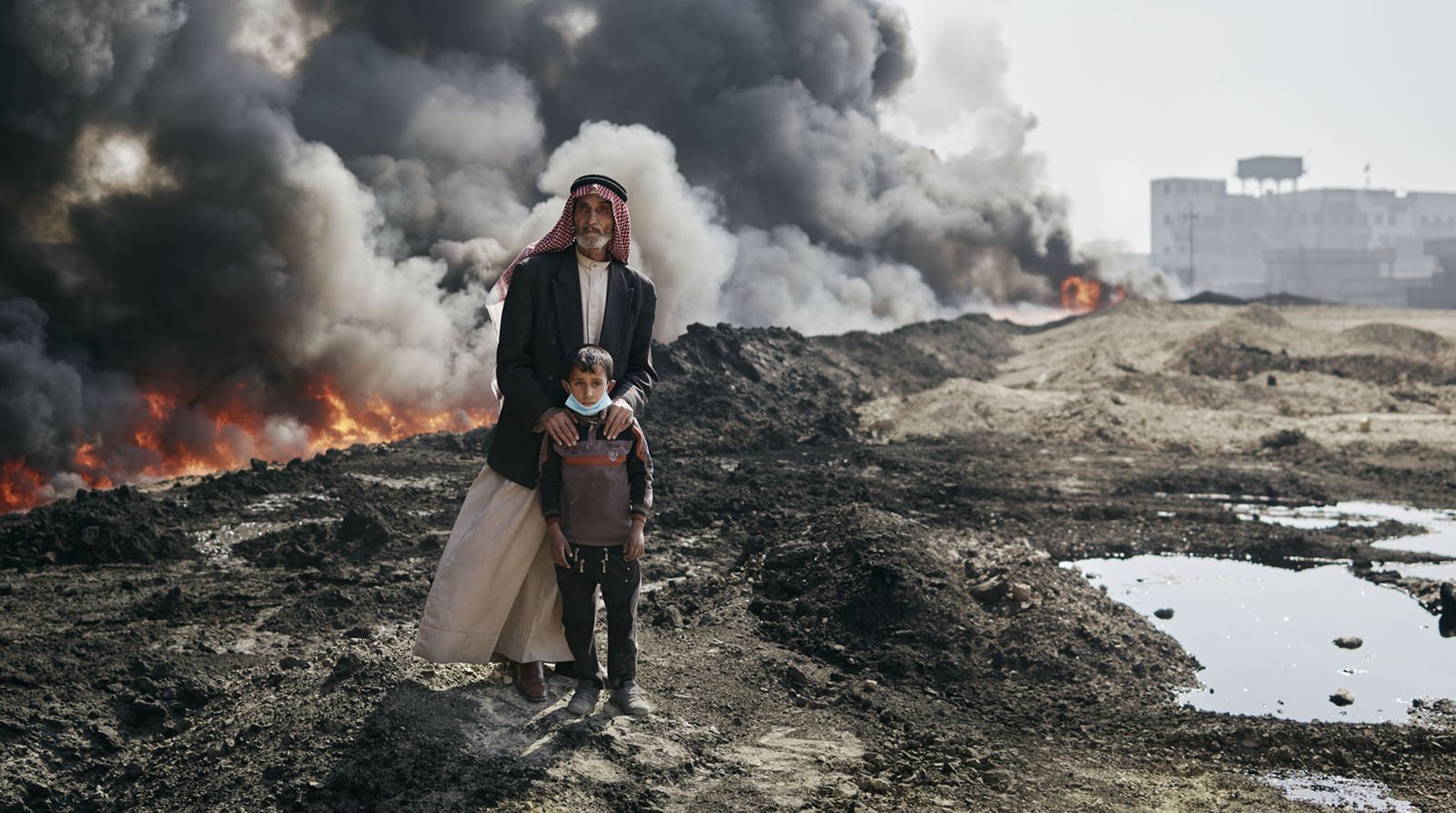 How did you end up photographing burning oil wells in Iraq? Was it an assignment from the Sunday Times Magazine, or something you embarked on on your own? I feel like there has to be a story behind how this opportunity came up…

Joey L.: This was a project for Oxfam, the British NGO working tirelessly in the region to help civilians and rebuild vital infrastructure damaged in the war. These shots of Qayyarah are part of their “Mosul Corridor” campaign, in which they are working in liberated cities and villages along frontline areas devastated by ISIS. This way, locals can move back home sooner and spend less time in refugee camps, which are all filling up due to the current military offensive on Mosul led by the Iraqi Army and Peshmerga forces.

In the West, the holidays and end of the year is a vital time for charitable giving, and we have pitched the images and video footage in a variety of publications such as the Sunday Times, television networks such as the BBC, all to illustrate what is happening on the ground. I turned down three different commercial assignments to spend time with Oxfam in Iraq, but projects like this are why I became a photographer in the first place. Did you have a plan going in? The aerial images and video capture the sheer scale of the disaster, while the portraits and action shots from the ground help bring us back into the human story—I’m assuming this was intentional.

When I first started planning the project with Amy Christian, the head of Oxfam media based in Iraq, we knew we wanted to do something unique. Amy knew I had worked in Iraq and Syria twice in the past and was aware of the political and security situation, so the rest came down to how we were going to tell the story with visuals.

I proposed using both aerial and portrait photography- (two styles a little different than traditional photojournalism). The war in Iraq and Syria has drawn on for so long, that the average viewer can actually grow fatigued by the daily bombardment of visuals. We needed a different perspective so that Oxfam could call upon people to care. As you mentioned: Aerials can do this because they show the enormity of the devastation and can grab our attention, and portrait photography can remind us of our shared humanity.

What sorts of challenges were you facing? I mean, this is about as far from a controlled studio environment as you can get.

The challenges never ended. On our first day, we had to get permission to fly the quadcopter from the various mukhtars and armed groups that control the region because ISIS uses similar drones to drop explosives, or to scout out military formations to plan counter-attacks. ISIS drones are commonly shot down, so we didn’t want to risk it. This area was close to the frontline and the civilians had just been freed from ISIS, so as you can imagine the tension was high.

Luckily, Oxfam has an incredible reputation among the community leaders and civilians, so it wasn’t difficult but just a matter of taking the time to explain our goals.

On the first day of photographing, the smoke was terrible, but at least you could actually see the sun and work in the daylight. On the following day, the firefighters led an operation to try and put out the blaze, but unfortunately that attempt only made it worse. In the afternoon at the height of the sun, the sky was pitch black due to the heavy black smoke blotting out the sun. Sometimes you could see a small pinhole of light trying to break through the clouds. It was absolutely insane and like nothing I have every seen before in my life.

Working with electronic cameras in this was a nightmare- fumbling around with a flashlight, the gear itself became oily to the touch and even putting your hands on anything would turn them black. The lenses would get fogged over with black soot and had to be wiped clean every 20 minutes. Sometimes I had to fly the drone back to us by just relying on just the internal map /guidance system, because the smoke was so thick we couldn’t see our way from the air by using the aerial camera. I remember having a shower afterwards and the water running brown. If this is how bad it was for us after just a few days, imagine being a local and living there. 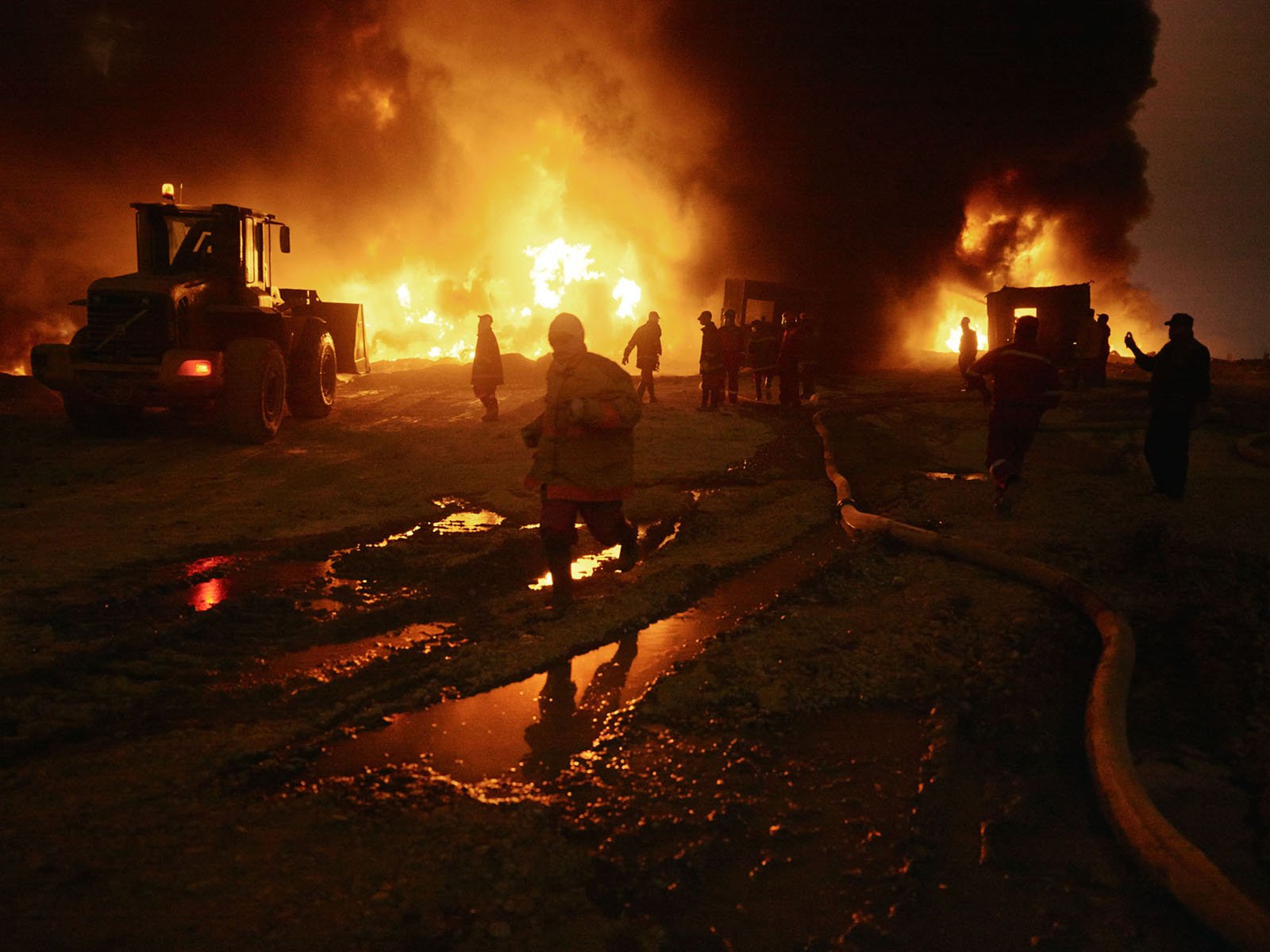 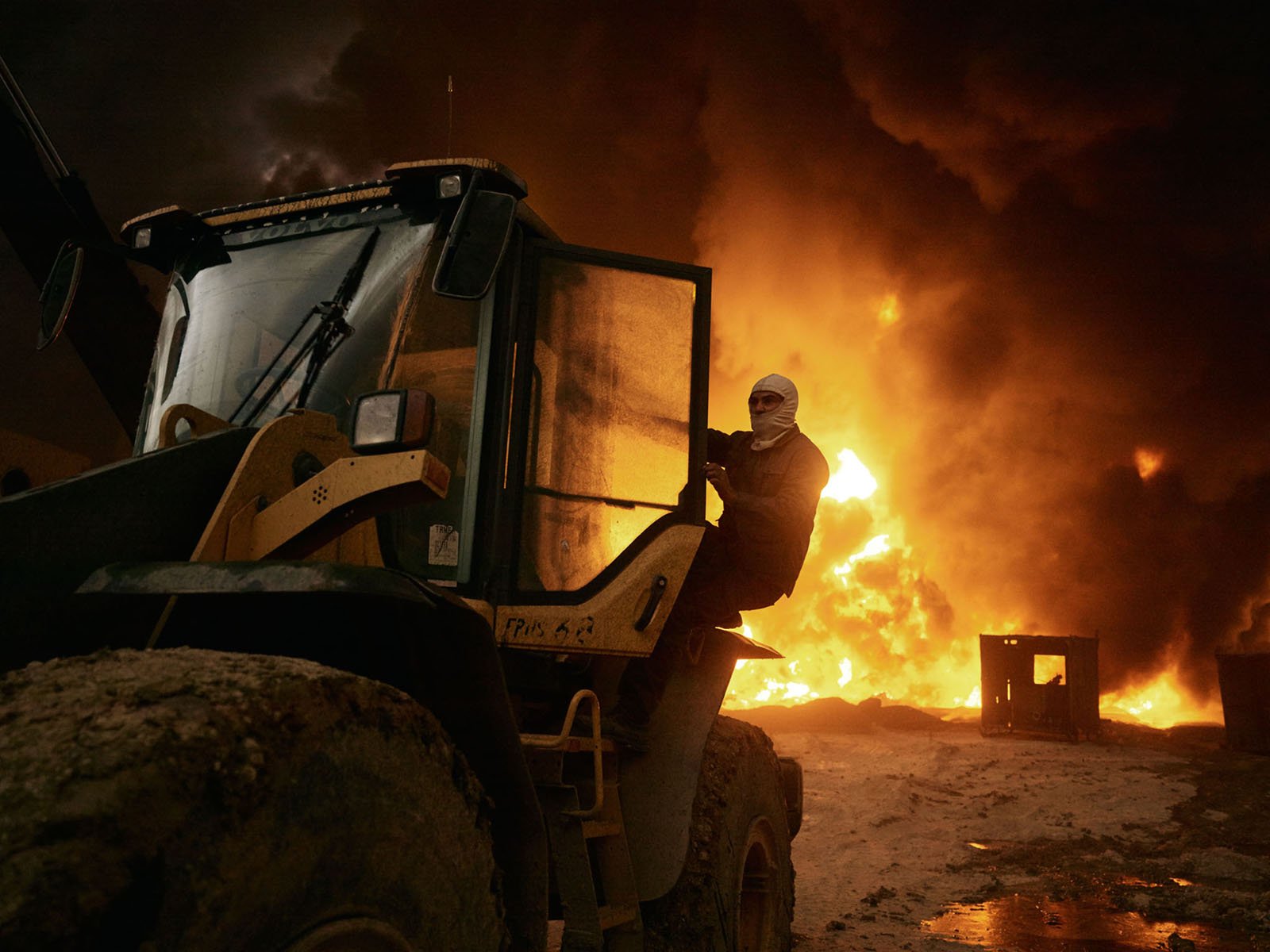 How do you tackle trying to capture the different facets of a story like this? There’s the environmental disaster, the danger to the residents, the incredible effort to quench the fires, and even the story behind how they were set … there’s a lot to show here.

We spoke to the civilians, the firefighters, the local clinic, and the different armed groups to all get a better picture of the situation before beginning our work.

On one hand, there’s the health effects of breathing in such poisonous fumes. Oxfam is concerned that the endless stream of pollution will contaminate the local water source, the Tigris River. On the military side of things, the burning oil creates a layer of black smoke above the region, and gets in the way of coalition jets from seeing the ground below them and targeting ISIS.

It seems ISIS did this both to seek retribution on a population that rejected them, as well as slow down the military campaign against them and allow them to retreat. With these two things in mind, we tried to photograph the story in such a way so that the viewers would care about the civilians, but that we could also galvanize the anti-ISIS coalition itself to do something about the situation. 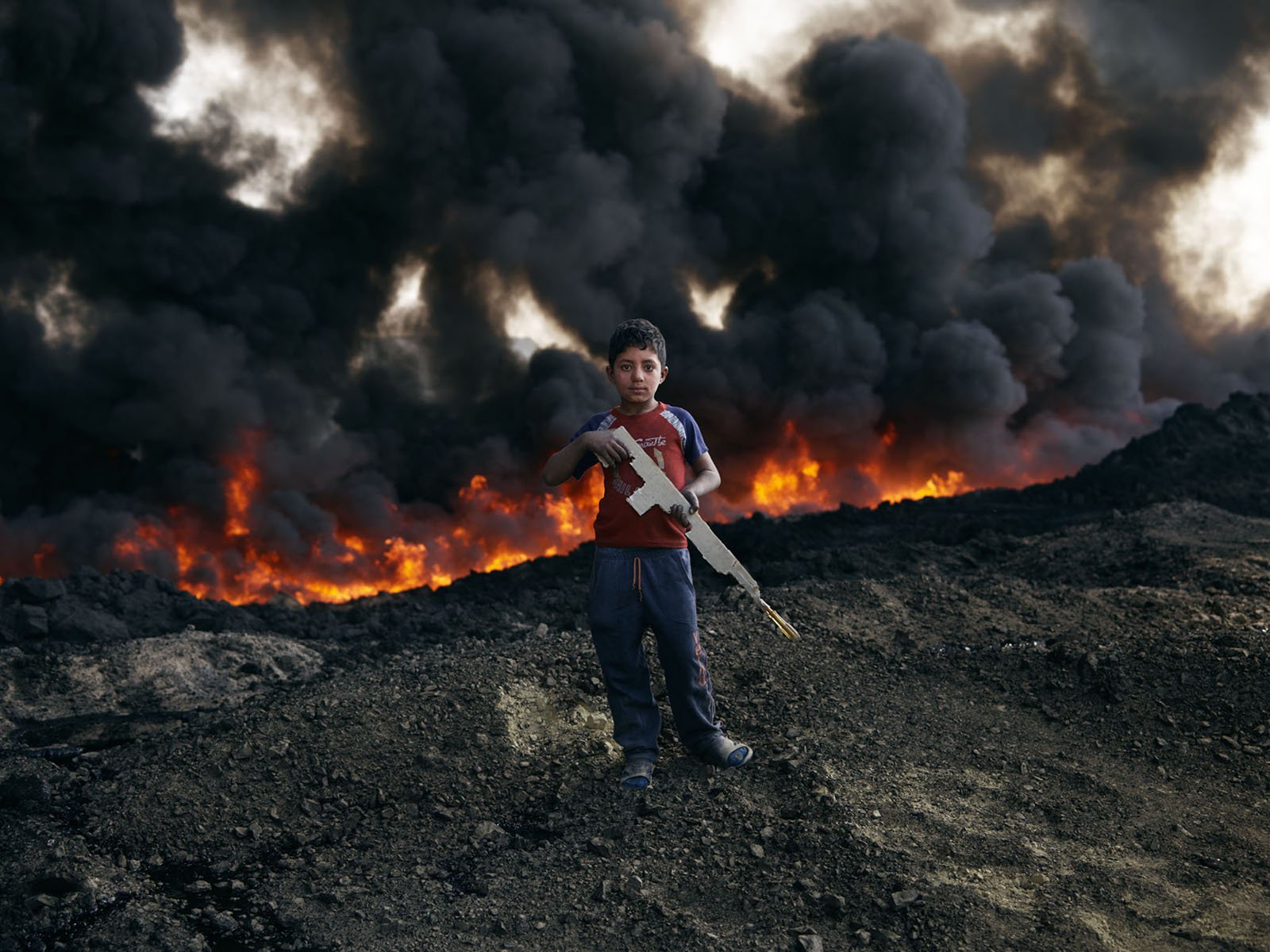 For the people out there wondering, what gear did you use? And how did you go about protecting your equipment from the intense elements you were out shooting?

My portrait camera is a Phase One XF with IQ250 back. It’s the same system I have used for years on all my commercial photography projects, so bringing it out to Iraq provides a unique quality. Of course the system is more difficult to use than a DSLR- a long list of technical bugs, focussing issues, hardware problems, slow in speed, etc. But in the end our goal was to create images that are unique, so in the end it was worth it.

The aerials were taken with a DJI Inspire with the Zenmuse X5R camera mounted to it. This camera shoots RAW and was able to feel cohesive with the Phase One images.

When you’re taking on-location portraits like this, does your experience shooting studio portraits help? How or why not?

The many different facets of my work as a photographer all contribute to each other. For example, there are lighting techniques with a flash I borrow from my commercial photography for my personal work. There are ambient light techniques I borrow from my personal work and give to my commercial work. There are story telling devices from advertising which can be used to help an NGO like Oxfam. Finally, how do you, as a photographer, feel when you’re capturing a disaster like this… photographing people whose lives are in danger, knowing safety and comfort and simply a plane flight away for you? Does it ever make it difficult to connect with the people you’re photographing and the story you’re trying to tell?

You’re right—when the series is done you can go home, and post on Facebook about what you saw and people comment that you’re a hero. You ask yourself: what about the people that can’t go home? You can’t help but feel guilty. But, I am also optimistic. This is because Oxfam is one badass organization that doesn’t take no for an answer. Here’s what happened next:

The day after a segment with Amy speaking on television aired with my aerial footage, she revisited the community, and the locals had all watched her on TV. They knew what Oxfam was up to, but they weren’t the only ones watching- this stuff was shown all around the world, and this includes the important people who make decisions. They were under pressure.

I’m honored to report that since we made this project, both the Iraqi and international effort to put out these fires has stepped up, help has been requested, and the oil fire seen in our images has been extinguished. With that said, there are even more fires and even more complicated problems on the horizon, but they will be tackled next. Sometimes a careful blend of political pressure and visual awareness can go a long way, and being a small part of that as a photographer is a true honor. A big thank you to Joey for sharing his work and thoughts with us. To see more of his work, head over to his website or give him a follow on Facebook and Instagram. And if you were moved by what you see here, visit Oxfam’s website or click here to donate directly to their efforts in Iraq.

Image credits: Photos by Joey L (unless otherwise captioned) and used with permission.