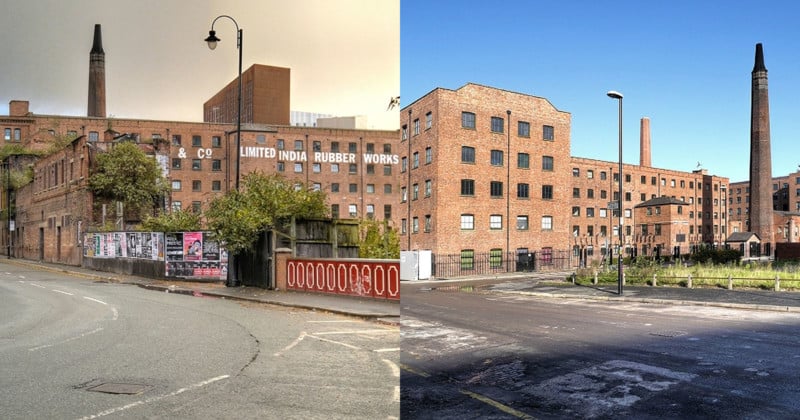 A photographer and group of models were summoned to an inquest in England this week regarding their actions during a photo shoot last year. After breaking into an abandoned warehouse, the group stumbled across a dead body. Instead of calling police, however, they kept shooting photos and then went out for pizza.

The Manchester Evening News reports that the group consisted of 20-year-old photographer Owen Birrell, five models, and Andrew and Sean Geaney (two brothers who run the clothing brand We Are What We Are).

The Manchester Town Hall inquest learned that on the evening of July 15, 2015, the group broke into an abandoned Dunlop warehouse in Manchester, England, for a fashion photo shoot. After climbing to the second floor, the group came across the body of 27-year-old Declan Noonan, who had hanged himself.

Despite seeing the clearly deceased body, the group decided to move to other areas of the warehouse and continue their photo shoot. Once they had the photos they wanted, they went out and bought pizza at Papa Johns.

It was only after more than 5 hours, at 1am, that Sean Geaney was urged by his girlfriend to call authorities about the body.

“We could have called, we should have called, but we didn’t,” Sean said at the inquest, according to Manchester Evening News. “We are not sociopaths. When we got home what happened hit us. It felt completely surreal. It was almost like it didn’t happen. There was no rational thinking.”

“Everyone was really shocked,” added his brother Andrew. “No-one was thinking rationally. I think we were concerned because we were trespassing.”

One of the models, who was 17 at the time of the incident, said the decision to keep shooting was due to everyone being on a very tight schedule.

Photographer Owen Birrell stated: “It was a collective group decision to carry on and get the work done, which was a selfish act.”

Authorities say that if the group had waited even longer to report the find, the photo crew would have been charged with a criminal offense. Aside from being summoned to the Town Hall inquest, no formal charges were brought against them.