New Zealand motorsports photographer Dirk Klynsmith was assaulted and knocked unconscious this weekend while covering the ITM Auckland SuperSprint in Pukekohe. Fortunately, the whole incident was caught on camera by another photographer, and the responsible party has been identified.

The Klynsmith story is strange, not least of all because the man who attacked him is actually the founder of a charity. Ted Jarvis, (former) Auckland Car Club president and founder of a charity set up to help disadvantaged youth, is the man you see in the video who first tries to trip Klynsmith, and then pushes the gear-laden photographer down backwards, knocking him unconscious.

According to fellow photographers who were on the scene, Klynsmith was unconscious for 10-20 seconds before coming to. You can see the sequence of events in this triptych: 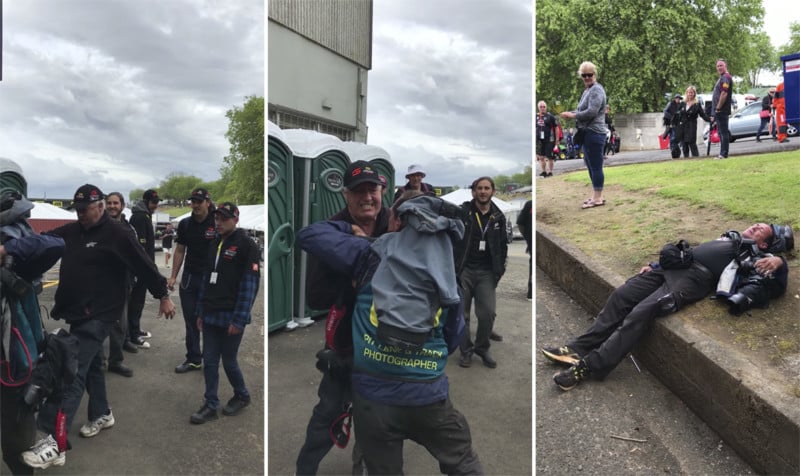 The argument was sparked by an earlier altercation with a young security guard about where Klynsmith was supposed to go. Later in the day, Klynsmith found the guard and asked him his name so he could file a complaint; that’s when Jarvis and a few of his friends got involved, allegedly standing up for the security guard who refused to reveal his identity to Klynsmith.

“I’m totally shocked at what has happened. I didn’t think at any point that when I was trying to get the guy’s name that it would progress to anything else,” Klynsmith tells Speed Cafe. “I’m just thankful I didn’t actually trip and land face first because the camera would have hit me in the back of the head and it would have been rather more horrible.”

Klynsmith suffered a minor concussion and is dealing with some neck pain as a result of his fall, but he is otherwise okay.

As for Jarvis, his quick escape from the scene (seen above) wasn’t enough to keep his identity a secret. Once the video spread online, he was quickly identified and has since been removed as president of the Auckland Car Club. The police are also actively investigating the incident.