If you’re in the market for a high-end full-frame camera, chances are good the Canon 5D Mark IV, Sony A7R II, and Nikon D810 are all contenders. Check out this side-by-side comparison if you’re having a hard time deciding which of the three is best for you.

This comparison was put together by JP Morgan over at The Slanted Lens, who enlisted the help of Kenneth Merrill to put all three of these cameras through their paces using native glass. They tested image quality, autofocus accuracy and tracking, dynamic range, and high ISO/low light performance to see where each camera excelled, or if there’s even a noticeable difference.

You should definitely check out the full video to see the comparison tests and judge the results for yourself, but if you’re in a hurry, you can read our summary below. 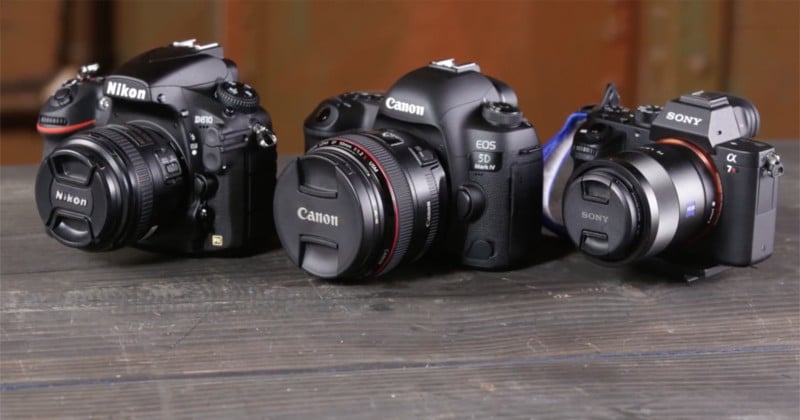 Canon really fell short here, but then again it’s also the lowest resolution camera of the bunch at just 30.4MP compared to Nikon’s 36.3MP and Sony’s 42MP. Both the Nikon and Sony came out very sharp, but each exposed the scene a little differently, and the lower res Nikon seems to have generated the highest quality image.

Sony won tracking hands down thanks to the plethora of AF points going all the way to the edge of the sensor and its nifty Face Detection mode. As far as accuracy, Nikon seems to hit the mark more accurately than Canon (the Sony had to sit this test out).

Sony takes another win here, bringing in the most detail in the shadows and highlights. More, even, than the Nikon. Is this difference really noticeable in real-world application when you’re pulling RAW files into post? Probably not…

In the last test of the day, JP and Kenneth pushed each camera’s ISO to see where the image started to really break down.

All of the cameras held up well to 1600 or even 3200 ISO, but broke down differently beyond that. Canon got noisier sooner, but the noise was more pleasing, giving the image the look of film grain rather than digital noise. Sony added contrast and held up really well right up until it started banding, and Nikon created the most “contrasty” images of the bunch. 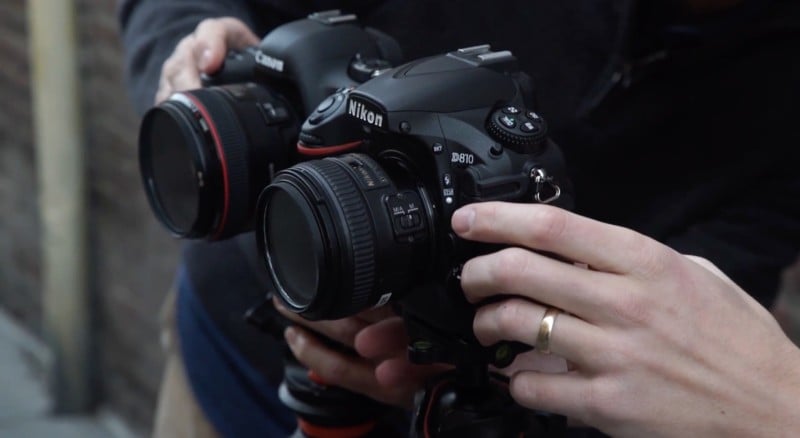 Ultimately, it seems like Canon, despite being the newest and most expensive of the three, fell short of Nikon, Sony, or both in every test Slanted Lens put forward. There’s no overall winner here—your choice will (or should) be dictated by preference and how you intend to use it—but there may be an overall loser.