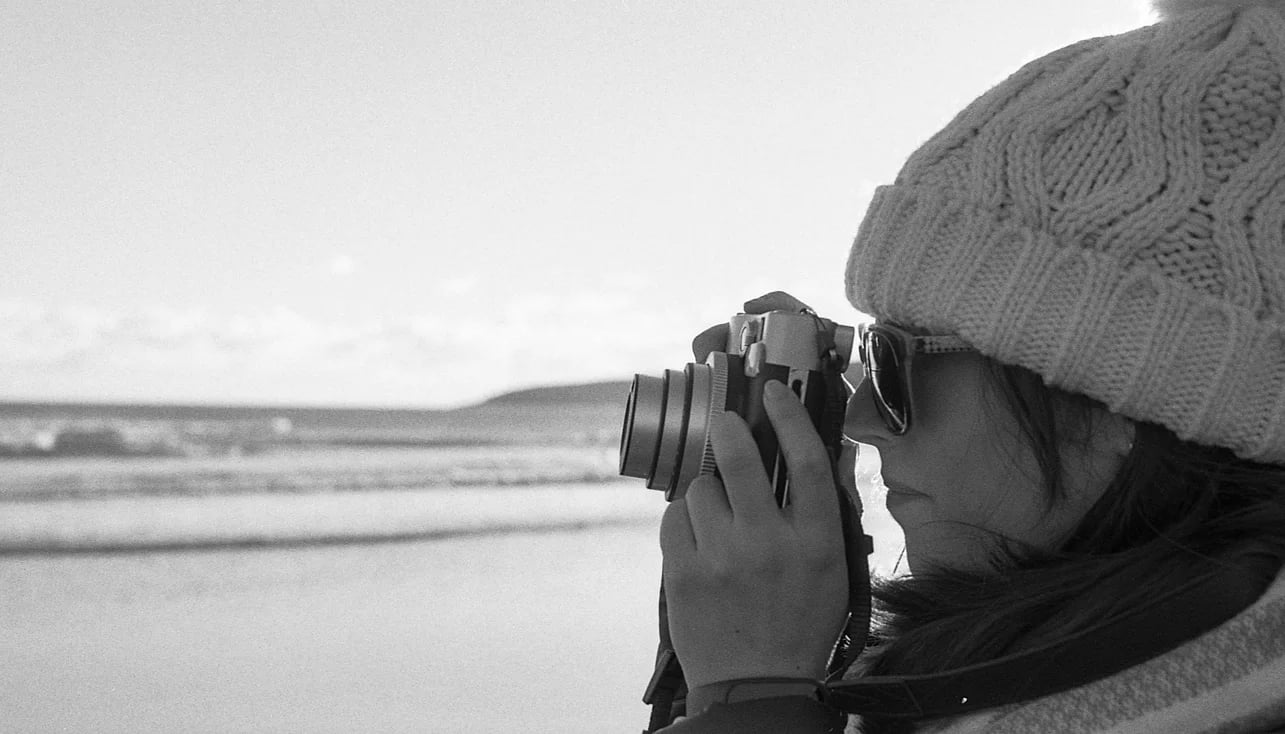 Patience is not one of my many virtues and I’ve always preferred practice to theory. Instead of taking the time to learn the essentials before starting, I usually jump in head-first… come what may! This behavior has caused me disappointment, loss of time and money.

That’s why I have decided to be more thoughtful and cautious in my approach to photography. From these bad experiences came the idea to compile the 3 biggest mistakes I made when getting into film photography so you can easily avoid them.

Each mistake here is based on my personal experience. I’m sure some of you may encounter similar difficulties, so do yourself a favor by taking a few minutes to read this. 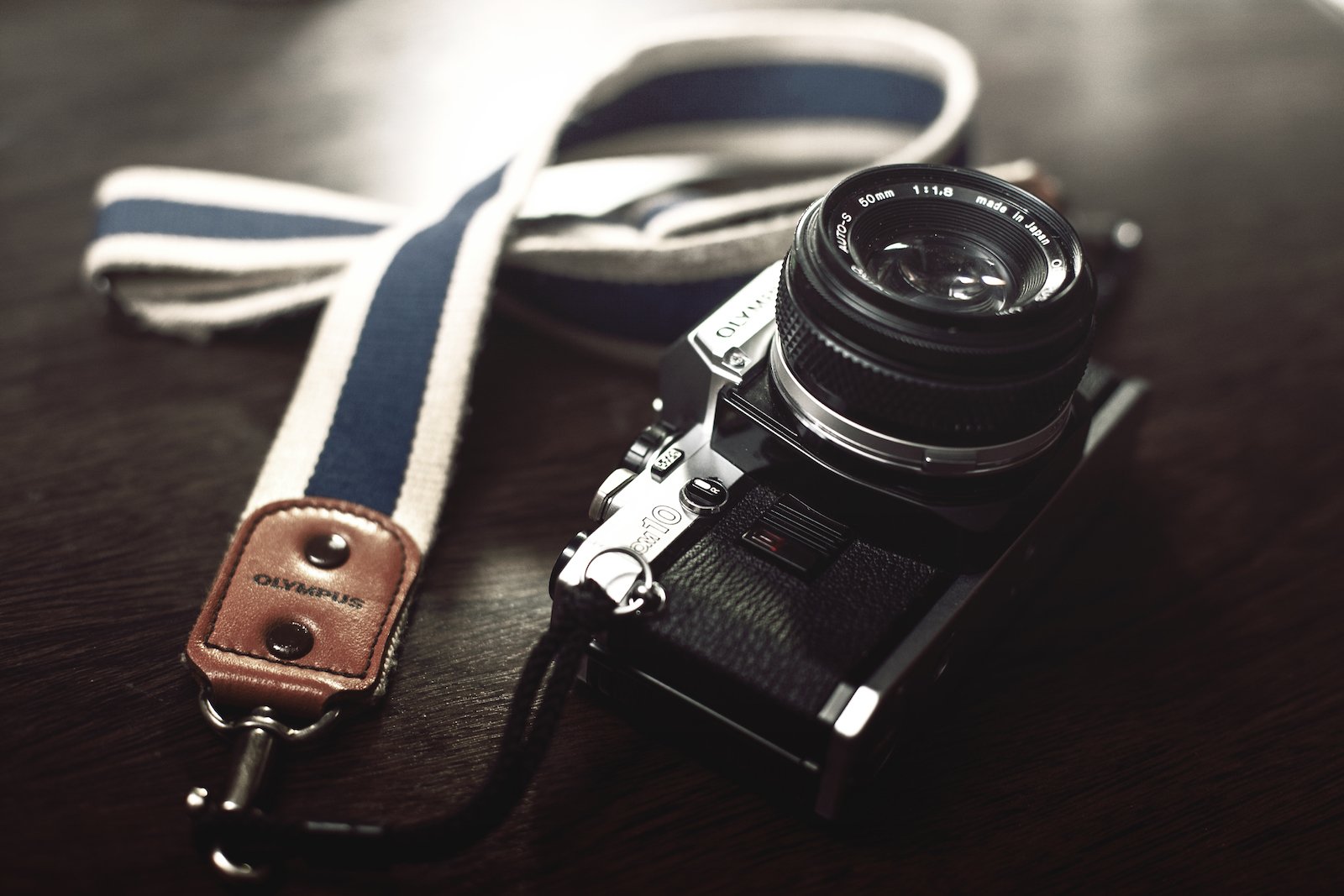 This is probably the most embarrassing of all the mistakes I made, and the worst part is that it happened more than once! A couple of months ago, when I started this project, loading a camera with a film was something completely unknown to me. The only experience with film in the recent years was with a disposable camera so we can easily agree that I had no idea how to deal with it.

Before buying my first camera I wanted to get my hands on an SLR to see how it felt, so a friend lent me an Olympus OM10. It seemed pretty straight forward to me and I didn’t bother asking him about loading film.

I shot two rolls with it, and enthusiastically brought them to the lab. When I came back to collect my pictures the following day, my enthusiasm quickly turned into a great disappointment. Both rolls turned out blank, nothing, empty, adios! I was so excited by the idea of seeing those pictures, but they were gone forever and there was nothing I could do about it.

After this bitter failure, I got myself a Leica M6 which, I was sure, was not likely to fail on me as this modest Olympus did. Everything was fine, rolls were flying through and it was giving me complete satisfaction. But like in every love story, there are ups and downs. Our first down had to happen at some point and I think you already know what follows next: Yes, it happened again, another empty roll!

This time things were a bit different though, and I knew exactly what went wrong. When I rewound the film, I quickly noticed after a few spins that there was no resistance. Usually, you feel a tension when rewinding the film back into the canister, here I felt tension for the first 4 or 5 spins then nothing, I was turning but nothing was moving anymore. It meant that the film never moved after loading it into the camera. I had been shooting the same frame over and over.

It’s a mistake that you can avoid very easily, and I’m going to show what you should to pay attention to when loading film: 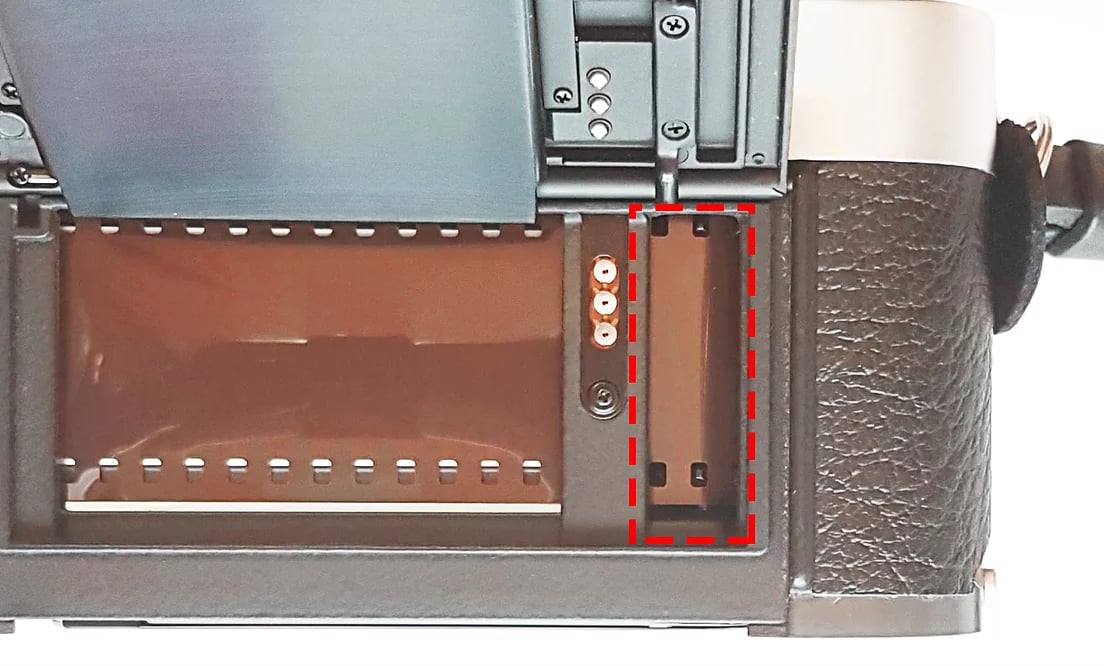 1. Once you have inserted the tip of the film inside the spool, make sure the teeth are engaged between the sprockets holes. This will ensure that the film travels correctly when you action the advancement mechanism to move on the next frame.

If there isn’t enough tension you can use the rewind knob to tighten the film’s position. ​

2. The film is now inserted in the camera and there is no way to open it to check what’s going on inside. Don’t worry, there is an easy way to determine if the film is moving forward or not.

When you use the film advance to wind the film, you simply have to check if the knob on the left (that you use to rewind the film) is turning. If it turns, good, it means that the film is properly engaged.

If the film is not moving, chances are that it’s was not engaged so you are good to open the camera and check what is wrong. This can also happen if the film breaks inside. It has never happened to me, but I know that can be an issue.

If, like me, you are coming from digital, chances are you’re used to exposing for the highlights and then recover the shadows in post. Digital sensors are well-known for being able to recover a lot of details in dark areas, but don’t do so well at keeping information in highlights.

With film, it’s slightly different, so you have to rethink your approach when measuring the light of your scene. Unlike digital cameras, film is very good at keeping details in highlights even if overexposed. The counterpart is that, if it was underexposed, you won’t be able to recover details in the shadows as a RAW file would allow to.

The top photo shows an overexposed image straight out of the scanner, below it, I lowered the exposure by 2 stops in Lightroom: 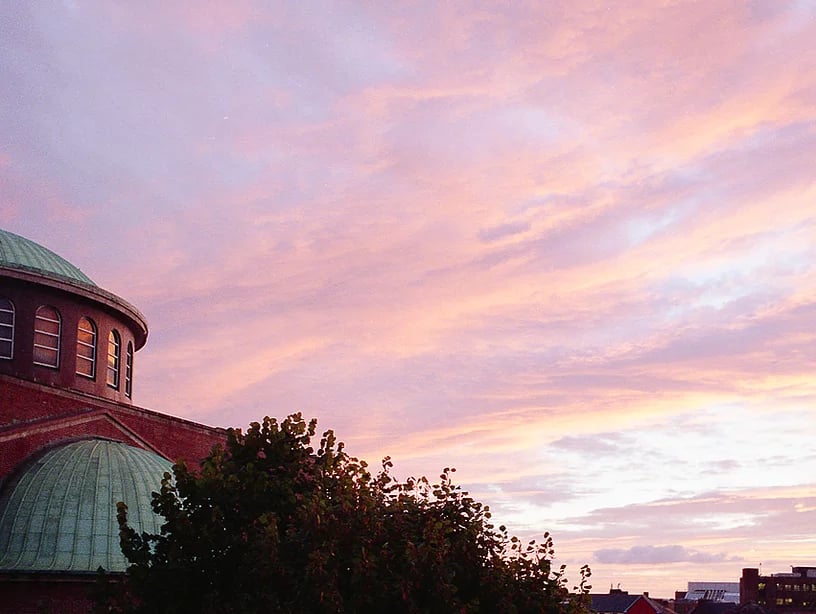 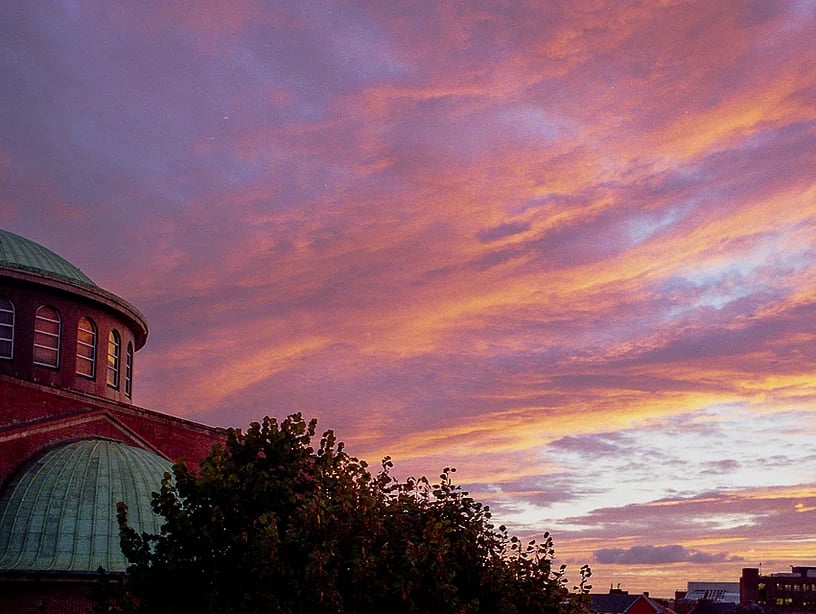 All films are not equal in terms of under-exposition. The most flexible are black and white and C-41 color film. They allow you to underexpose by a few stops and still retain details in the shadows.

There is one type of color film called “slide film,” sometimes referred as E-6, that doesn’t offer this flexibility. It requires much more precision when exposing. This is not the type of film you want to use if you are just starting out. It’s also very difficult and expensive to get developed, so I would suggest sticking with standard C-41 at the beginning.

If you just opened to door of film photography, you must feel a bit lost by the amount of film to choose from… this is normal. I was feeling the same at the beginning and couldn’t decide which film I should buy. I started reading reviews, checking pictures on Flickr, etc.

After a while, you will notice the same names coming up over and over, such as Kodak Portra for color and Ilford HP5 or Kodak Tri-X for black and white film. These are the most popular but they are also pricey. If budget is not an issue, you can stop reading here; however, if you are concerned about the cost of your photography, stay with me a bit more.

In my quest for the perfect film, I ended up on choosing Kodak Portra 400. The look of images really appealed to me, and it didn’t take long before a box of 5 rolls got delivered to my mailbox. Of course, quality comes at a price, but if I wanted to create this kind of images I had to put the price. 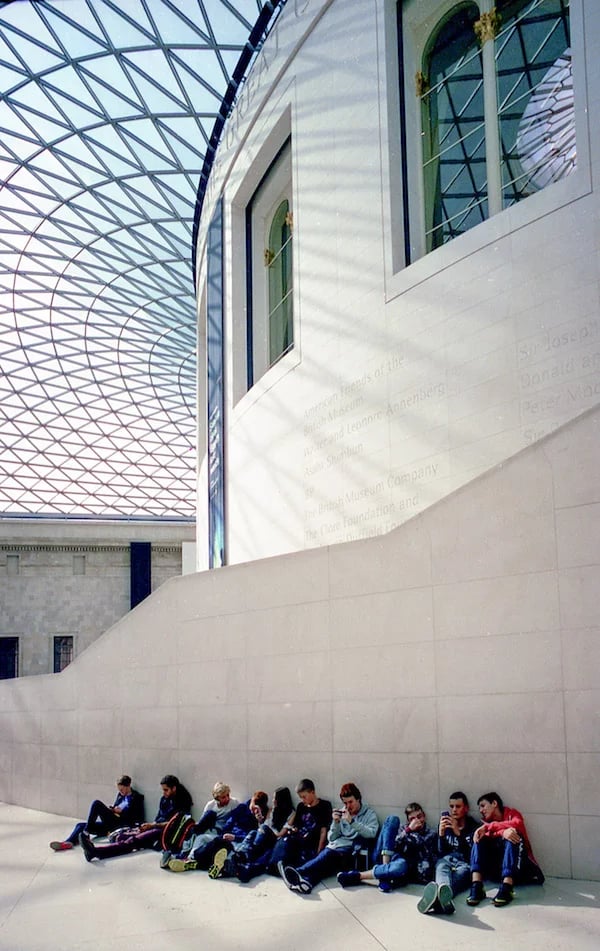 So I went on shooting and was sure that it would get fantastic images thanks to this professional film. Soon, I proudly handed over a freshly-shot roll to my local lab to get it developed. As soon as I got the negatives back, I ran home to scan those images.

My enthusiasm quickly vanished when the first images appeared on my screen. It was a real cold shower: these images had nothing to do with what I was expecting from this film.

Looking back, I figured that the problem was not the film but my lack of experience. At the time, my knowledge of film was so limited that we could consider it non-existent. To get the most of a film, there are many factors that will impact the final result. We have seen earlier that exposure is one thing but the lens, quality of light, developing process, and scanning will also play a major role in achieving this result.

Let’s be honest, if you shoot with professional film but then play cheap, like I did, on development and scanning, you will never reach this quality. It’s like driving a Ferrari with cheap tires, there’s no way you’ll get optimal performance.

If you are just starting, there is no point in buying the most expensive films on the market. You can use cheaper alternatives and get respectable results too. I’ve reviewed the Afga 200 for color and Fomapan 200 for black and white. These guys are doing a great job while saving you some frustration and money.

Below is an example of what you can get with a $4 roll of Fomapan 200: 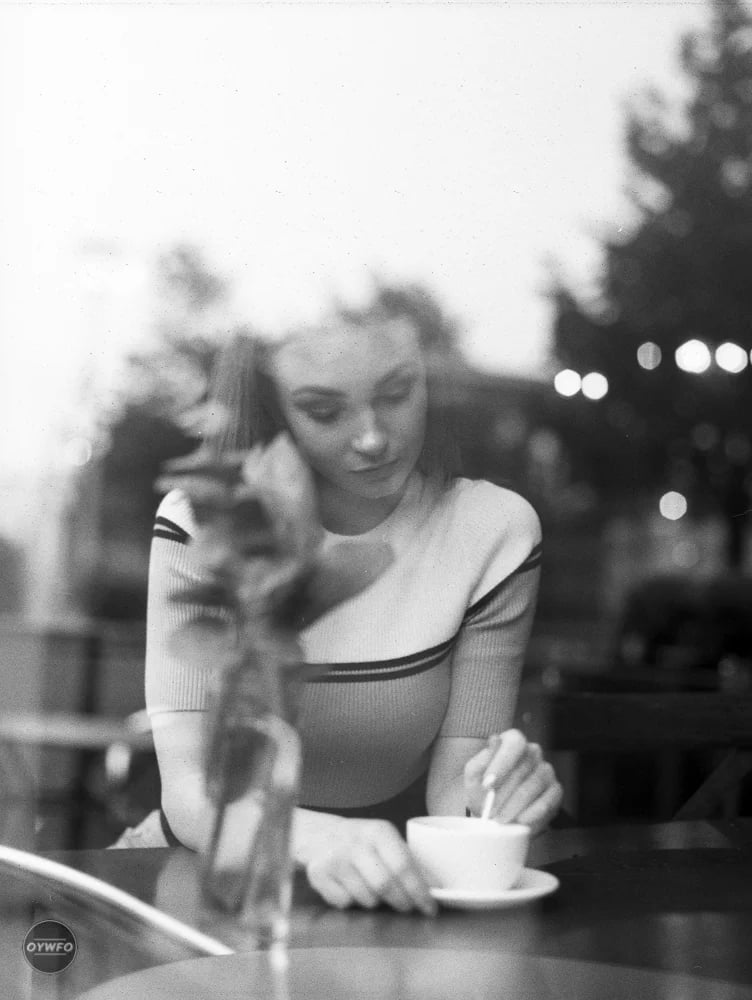 Once you have more experience, you should definitely use those more expensive films and try to send your work to pro labs if your budget allows you to do so. They have the equipment and the level expertise required to reveal the most of your negatives.