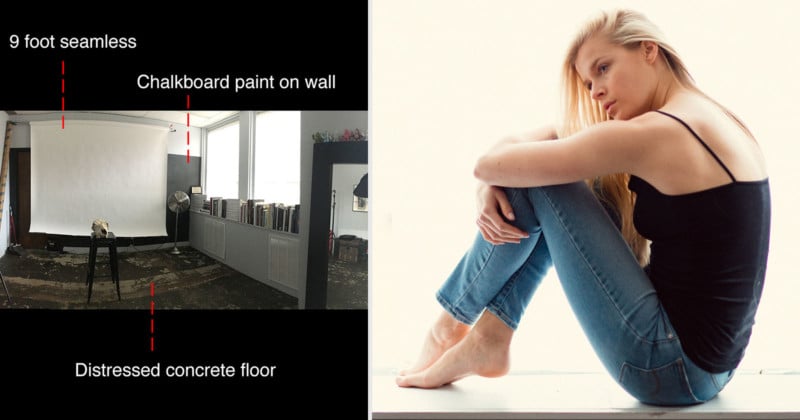 I have a studio. For those of you that know me — the author of the Studio Anywhere books, which focus on shooting anywhere but a studio — this statement may sound oxymoronic or even blasphemous. Nonetheless, after years of shooting in my cramped basement, I finally outgrew my space and needed a slightly larger, dedicated space to have for working with clients.

After all, shooting business headshots in my suburban basement was not only inconvenient for clients, it was also a tad awkward for everyone, and at times, bordered on being unprofessional. That said, knowing how to create a studio anywhere was invaluable when I was searching for a rental space.

If you are anything like me, you are awed by behind the scenes photos that show sprawling studios equipped with hundreds of thousands of dollars in gear. It’s impressive. Not unlike how having a supermodel girlfriend or a owning a Lamborghini is impressive. While that’s not something 99% of us photographers will get to experience, that doesn’t mean we have to sit out the game.

It’s taken years but I’ve finally broken the image in my head that has been long associated with the term “photography studio”. Twelve years ago, when I was about to graduate college my idea of what would be needed in an ideal photography studio space looked quite different than it does now.

My image had been shaped by my experiences in school–shooting in sprawling, well-equipped studios, complete with beautiful wood floors and a 40” printer. However, my experiences post-graduation — namely not having the money to afford a studio or a ton of gear—helped shatter my idea of what is actually required to have a functioning studio.

I’ve used my garage as a studio. I moved on to a basement studio, which met my needs for years. Now that my needs have exceeded my space, an actual dedicated studio is necessary, but by working in these cramped, inadequate spaces for years have helped me to learn precisely what I did need in a studio. I know I wouldn’t need much as long as it met a certain criteria. 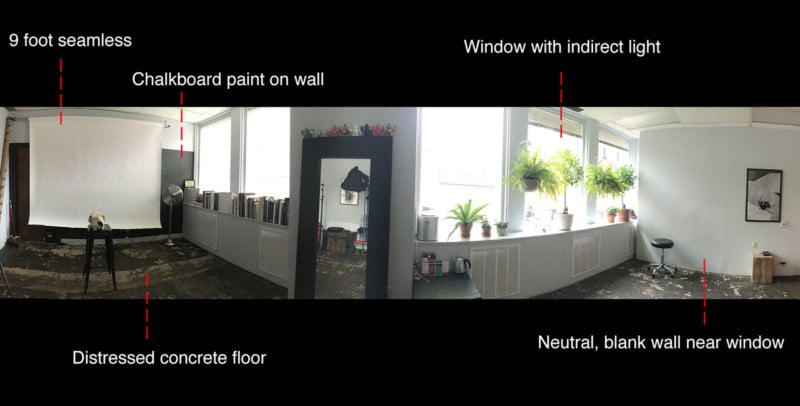 As you can see in the image above, the studio I selected is a modest one. Weighing in at just under 330 square feet, it measures 26.75’x12.3, with a nine foot ceiling. To quote Han Solo, “She may not look like much, but she’s got it where it counts.”

I picked the space for several reasons. It’s just wide enough to allow for a 9-foot seamless and long enough to shoot full body portraits with an 85mm lens. 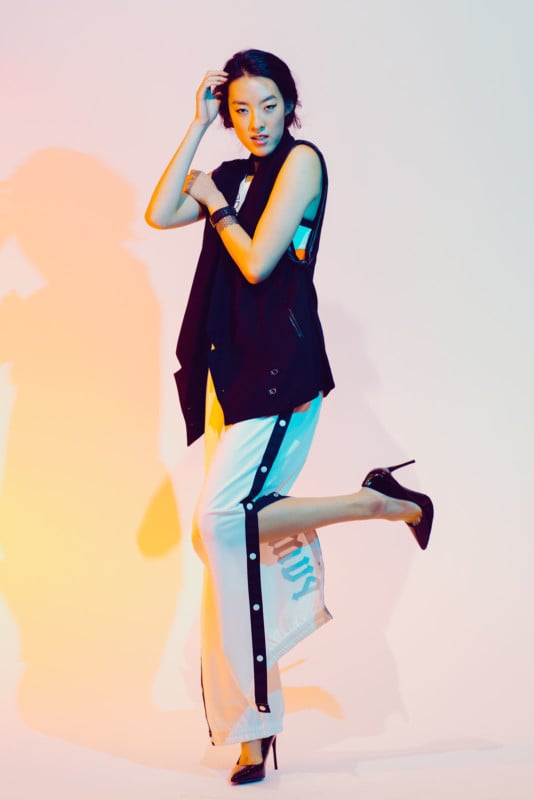 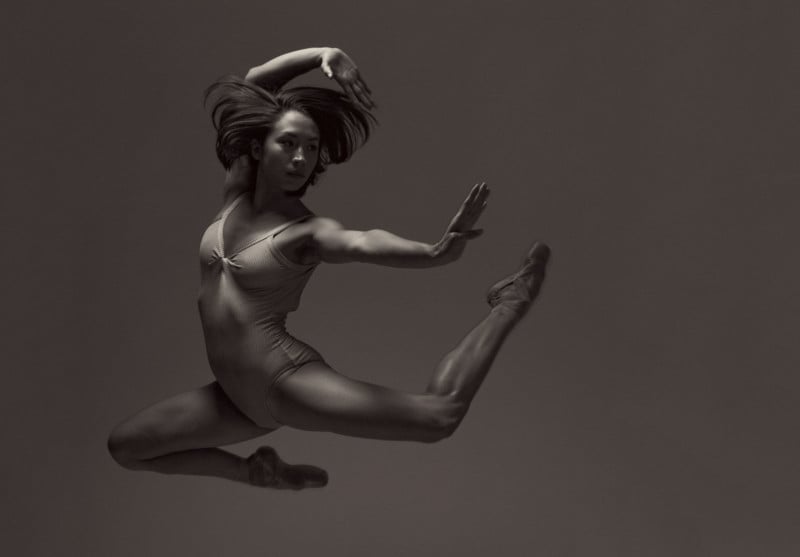 It has a wall of west-facing windows that gives me indirect light all day, thanks to the tall buildings next door to me. This means I can quickly and easily get soft, beautiful light just by moving the subject to the other end of the room. 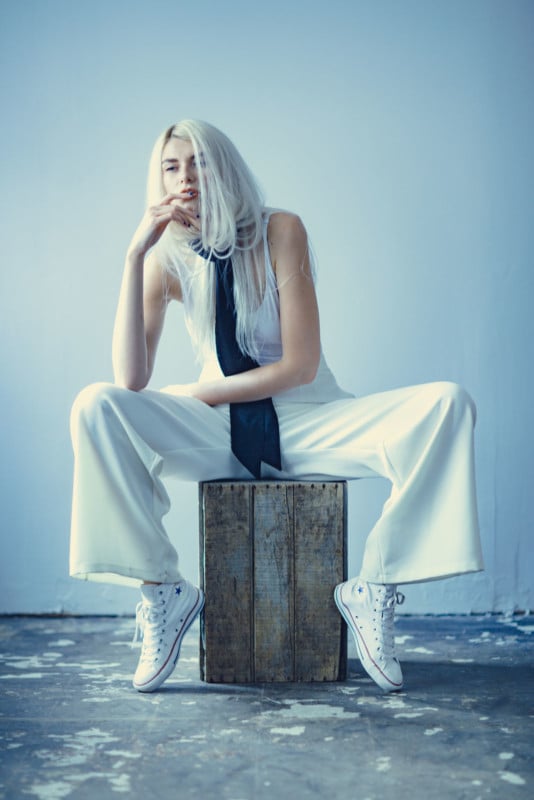 I attached some cheap paper window blinds which I can pull down to get a fantastic DIY scrim, allowing me to place the subject in the window and get a soft, clean background. There were even a couple of happy accidents that I stumbled upon after I moved in. The previous tenant had painted one of the walls in black chalkboard paint so they could make lists or write inspirational quotes, etc. I was originally planning on painting over the wall but happened to shoot one of my subjects on it one day and fell in love with the look. With the chalk patina that had built up over many uses, the wall actually reads like a canvas backdrop. 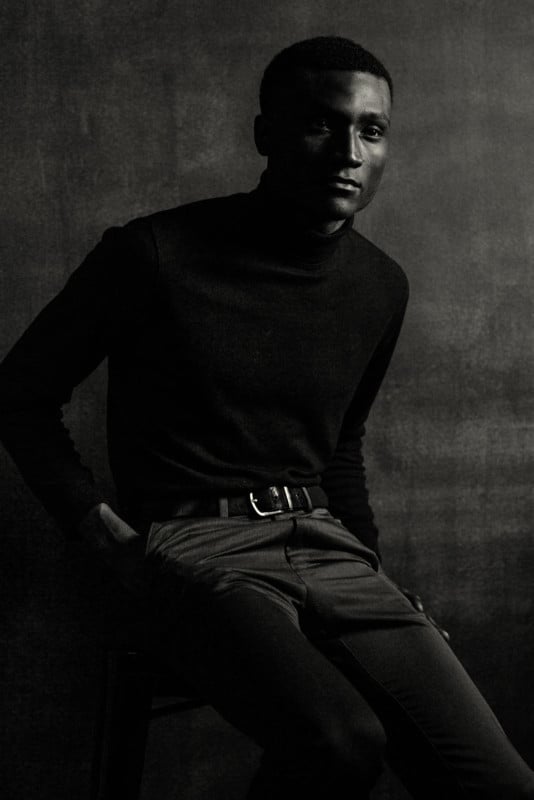 The other discovery came when I asked the landlord to have the green, industrial carpeting removed before I moved in. I asked them to leave the floors “as is”. I was expecting a neutral concrete floor but was pleasantly surprised to find a weathered concrete, comprised of dark and light earthy tones, which makes for a cool backdrop in itself. 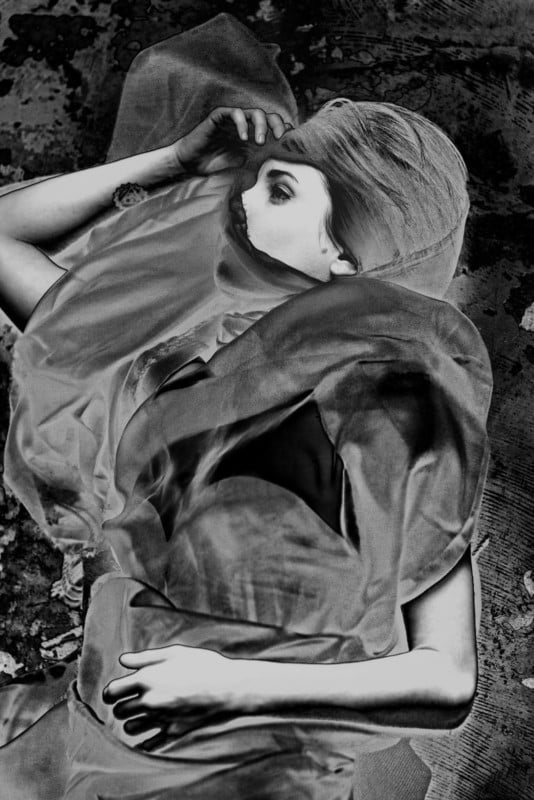 I’d love to hear about your studios in the comments below. Feel free to post pics showing how you’ve made the best out of what you had to work with. By sharing your journey we will grow and all of us will be better for it.

P.S. Check out my new book Studio Anywhere 2. It’s currently out in eBook form on Rocky Nook (make sure to use the coupon code STUDIONF2 to save 35%) and will be available in print form worldwide, January 2017. Also, if you’re a hands-on learner like I am, make sure to catch one of my workshops.

About the author: Nick Fancher is a Columbus, Ohio-based portrait and commerce photographer. You can connect with him on Facebook here. You can also find more of his work and writing on his website and Instagram.