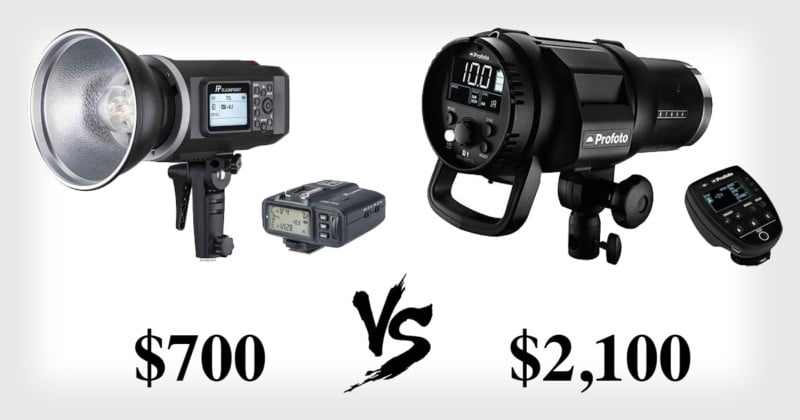 Back in December 2015 I saw a rumor report online about a 600w/s Chinese monolight with onboard battery, TTL, and built-in radio. After doing some research I found they had a TTL speedlight that worked within the same system, and I became very excited.

At the time, I was combining Paul C. Buff Einsteins with the Yongnuo YN-622-TX/YN-568, and while I had power control of all my lighting from my camera, the receivers, cables, and batteries necessary to make it happen was anything but smooth. I watched over Godox’s website like an eagle, and the first day the AD600 was available I had 2 on the way to the states.

Once it arrived in one piece, and then did everything as promised, I began investing into the entire system through additional Godox and Flashpoint purchases (yes, they work interchangeably). As I’ve used this equipment throughout the year and talked in forums about it, it was constantly compared to Profoto’s B1.

People questioned its power output, build quality, reliability, etc. Over and over I heard, “you get what you pay for,” and that there was simply no way the Godox AD600 would perform anywhere near the Profoto B1. I asked around and was able to borrow a B1 and decided to test them head to head in every category that I thought could separate them.

Both the Profoto B1 and the Godox AD600 offer a 9-stop power range, on-board battery and radio, TTL (the AD600M and AD600BM do not have TTL), short flash durations, fit into a similar package. Both can be triggered by an on-camera transmitter that lets you change the power output and modes remotely.

The only difference I could find between their feature list is the Profoto B1 has a handy method of carrying over a TTL reading into Manual output, so you can continue to shoot without the use of more TTL readings.

Neither of these strobes are light. The AD600 weighs 5.8 lbs, while the Profoto B1 weighs 6.6 lbs. The Profoto B1 is a little bit longer as well, despite the AD600 having an external bulb while the B1 bulb is protected and flush with the body of the light.

Wattage is often thrown around as the deciding factor in a monolight’s power output. Without a standardized method of testing (even Guide Number varies from brand to brand), it’s hard to know which lighting gear will provide the most pop. Based on wattage alone, we would expect the AD600 to be about 0.2 stops more powerful than the Profoto B1.

I decided to test the pair head to head to find out which was the more powerful performer. 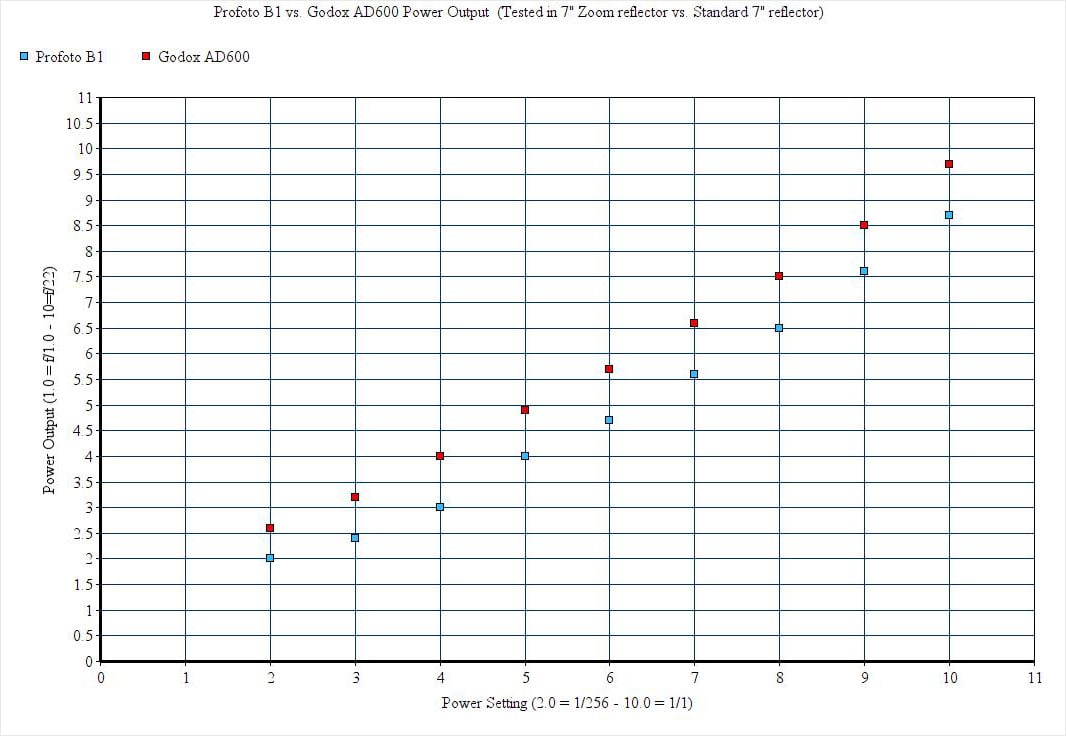 After getting all my results on the Sekonic, I converted the data to an integer scale. On this scale, the Y-axis is “stops of light”. Both followed a similar curve, with the Godox AD600 outperforming the Profoto by almost a full (.9) stop of light at full power. I did this with a shoot-through and reflective umbrella as well, and created similar results; however, when I tested them in 2’x3’ softboxes, the Profoto fared much better, even producing more output (.1 stop) at the highest setting. 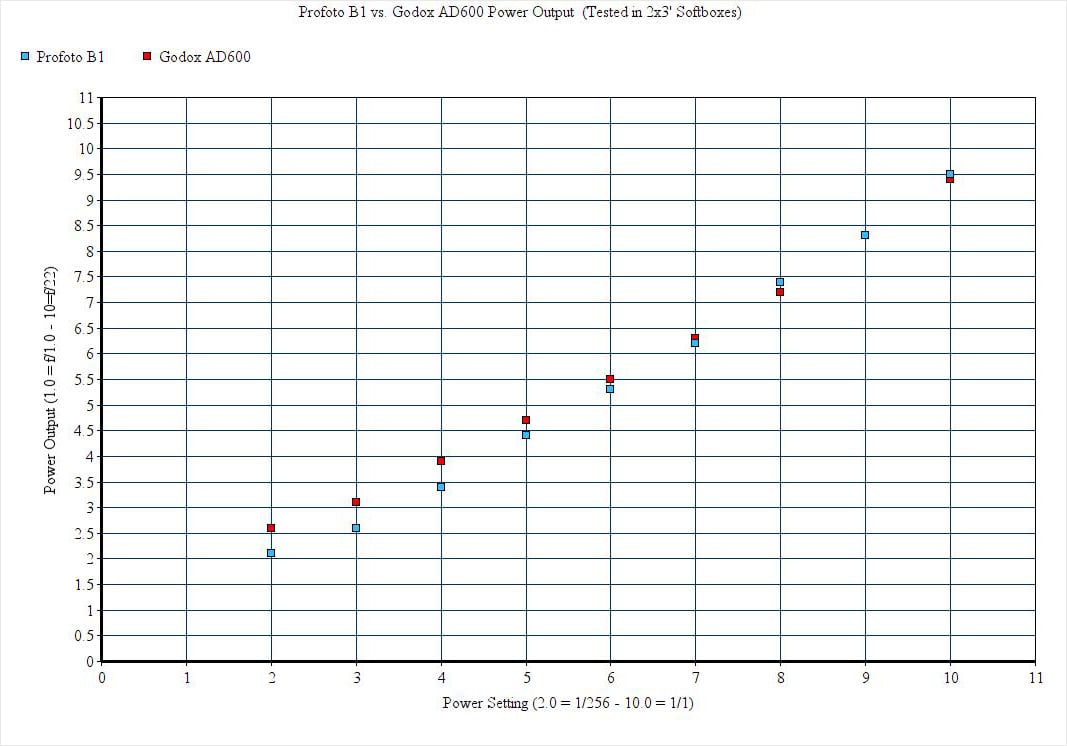 It’s worth noting, this was in 2 different softboxes. My theory for the Profoto performing better in just the softbox is the fact that the recessed bulb of the B1 does not provide the same spread of light as the AD600, which is omnidirectional. This means more light is thrown directly through the front panel, whereas the AD600 would spread more to the walls first.

I also found (and highlighted in my video) that the B1 would vary in output more than the AD600. Often the B1 would jump .1-.2 stops of light without changing the power output, which was surprising given Profoto’s history of power accuracy.

To test this I alternated outputs between 1/1 and 1/256. I did it as quickly as I could to give the monolight minimum time to adjust. The B1 had freeze mode turned off to ensure its most stable color. 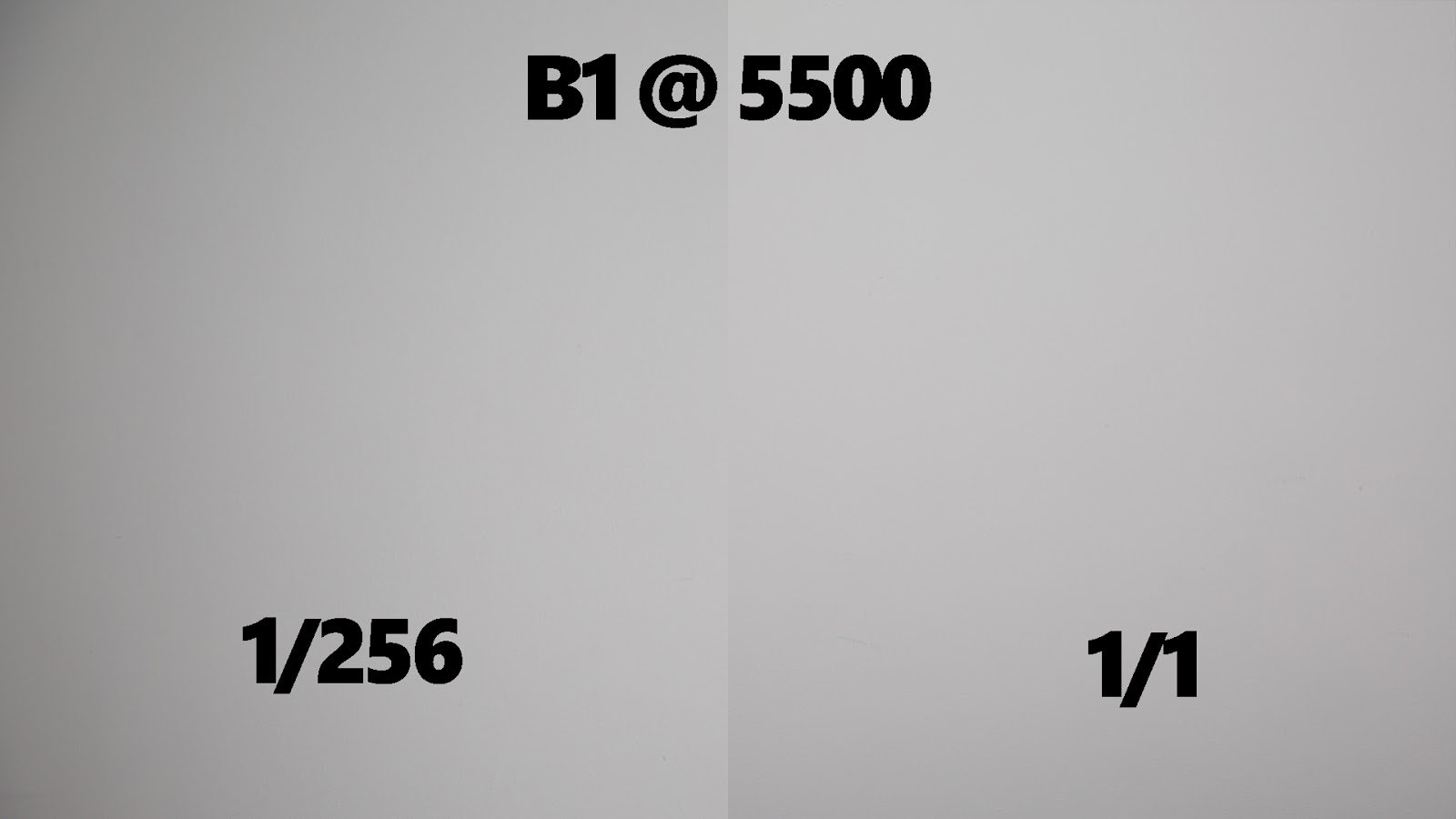 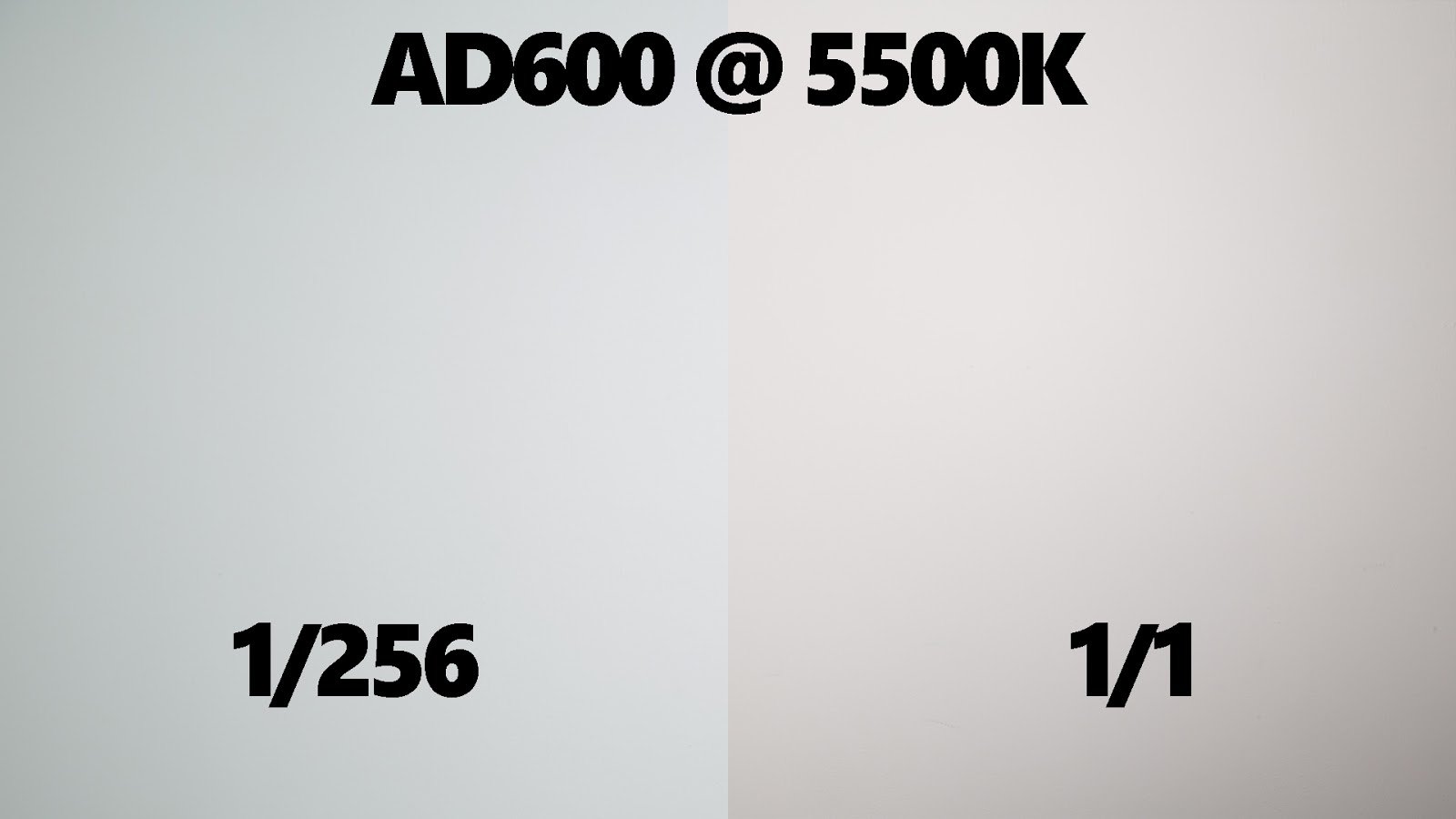 The Profoto B1 outshined the AD600 dramatically here. The AD600 had a 350K shift, as well as a small tint change. While I don’t consider changing a flash output 8 stops back to back “real world shooting,” it’s amazing for a workflow to have the color consistency of a B1.

The B1 markets its fastest flash duration as 1/19,000s, which is very impressive. However, that is a t.5 metric, which many consider useless to the t.1 standard.

While I have no means of testing the actual t.1 duration of these lights, I did want to put them on the same scale. It’s widely considered that a t.1 duration is 3 times as long as a t.5. So I converted Profoto’s marketed durations to the listed AD600 durations, and scaled them over output rather than power setting. What we are left with is the flash duration one would achieve for a desired amount of flash output. 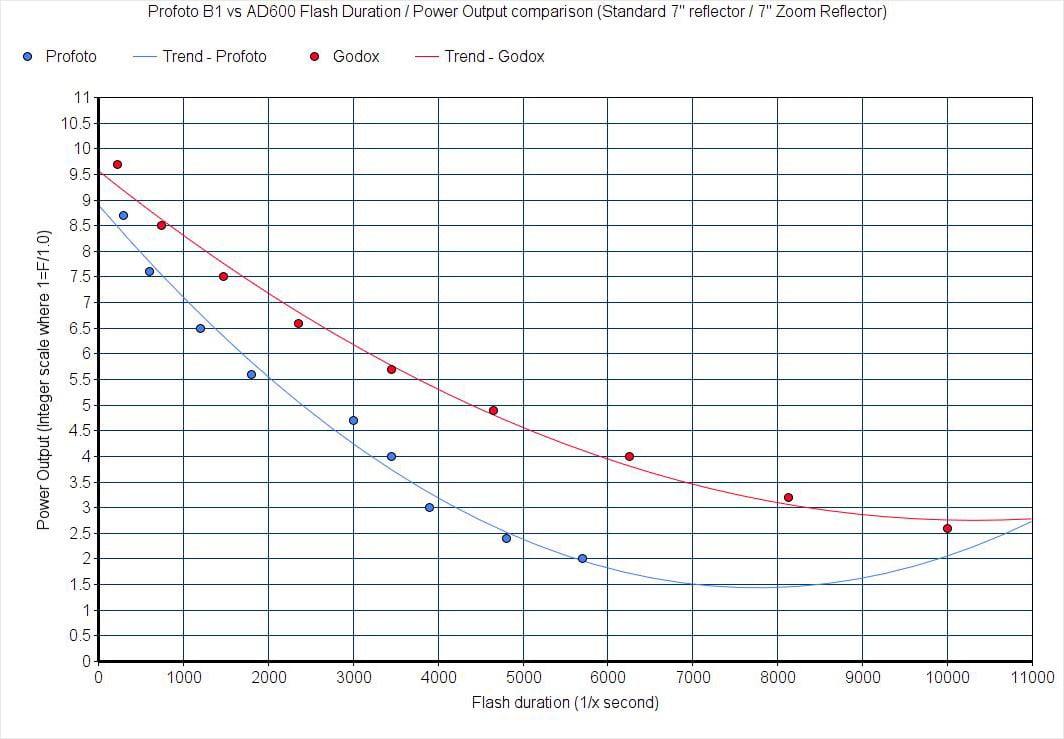 If we consider the manufacturer numbers reliable, we can see that the Godox AD600 is surprisingly superior to the B1 in this regard.

The most common complaint of the Profoto B1 is its limited battery capacity. While the Profoto B1 only provides 220 full power flashes per battery, the AD600 will give you 500.

Profoto has the OCF gel system, which is an elegant and efficient method of gelling the light at the source for use with any modifier. Due to the omnidirectional external bulb of the Godox AD600, gelling at the source is not very convenient.

I have found that cutting gels to wrap around the bulb, and then securing with a 2” silicone cooking band (while avoiding the holes for heat to exit) is the easiest way to gel the AD600. There are some 3rd party gel caps that slide over the bulb available, but a robust system has yet to be developed.

The Profoto B1 Air remote provides the user with control of all Air products. There isn’t a great system in place for combining the use of Profoto products with other brands of lighting, while still retaining control of the Profoto system.

Godox has a large selection of manual and TTL speedlights, all with the same radio technology built in offering complete control. Their speedlights and hybrid AD360II can be used as both masters on camera for the AD600. They also have bridged together previous generations of lighting with various radio controllers and receivers. Lastly, X series receivers allow connection to other brands lighting, and in some situations will even allow for control of output.

The AD600 can be converted into a pack and head unit with the H600B, where the body of the AD600 supplies the output to a 1-lb head. Additionally there is a H1200B that uses the power of two AD600 lights to provide power to a single 1200w head. They also have made an AC adapter that slides on in place of the battery, turning the AD600 into a wall-powered monolight. Godox has done a lot to expand the functionality of the unit.

Profoto does give you the option to buy their other lights.

At first when I was exploring this, I found that Profoto made very high quality modifiers and with the Bowens mount of the AD600, there was wide access to modifiers of all different qualities. However, because of speedrings, adapters, and umbrellas, both systems offer access to almost any modifier.

The Profoto B1, however, does offer the ability to fine-tune modifiers through use of their mount, adding an additional level of control

Both of these lights feel very well made. While I did not test, I would assume the same type of drops would impair both lights. Profoto has a track record for creating products built to last, and Chinese production, well… doesn’t. It remains to be seen how both the electronics and body of the AD600 handle the test of time.

When it comes to supporting their products, Godox is not building a great reputation. From everyone I have talked to that has bruised their gear, they are not receiving responses from Godox. My best suggestion for combatting this is to instead purchase the Godox equipment under the Flashpoint rebrand, which has a quality warranty and great customer support.

The AD600 is sold as the Flashpoint Xplor 600 TTL, and they offer the entire Godox X series lineup as the R2 series.

The Godox AD600 is $700-750 depending on where you purchase, and generally includes the X1 radio controller of your choice in the package. The Profoto B1 is $2095 and you will need the $411 air remote to unlock its full potential.

It’s worth looking at the accessories as well, such as the $266 B1 battery vs. the $150 AD600 battery. Overall you can expect to spend over 3x per light when choosing Profoto.

This is where you’d expect me to make a final conclusion about which one is “better”. I hate that word, because it implies that we all have the same needs. This industry isn’t about what works, it’s about what works for you. Even though I have fully adopted the Godox/Flashpoint lineup, I still rented the B1 the last time I had a color-critical project.

If you are a mixed light user who is looking for a great system, for ease of use between speedlites and strobes, the Godox lineup will provide you a way better experience. If you are looking to buy two lights and still be using them in 10 years, best you choose Profoto for the continued support. I just hope the information I provided allows you to make the best call on the right light for you.

About the author: Robert Hall is a wedding and commercial photographer in Southeast Michigan.
You can find more of his work on his website, Instagram, and YouTube.