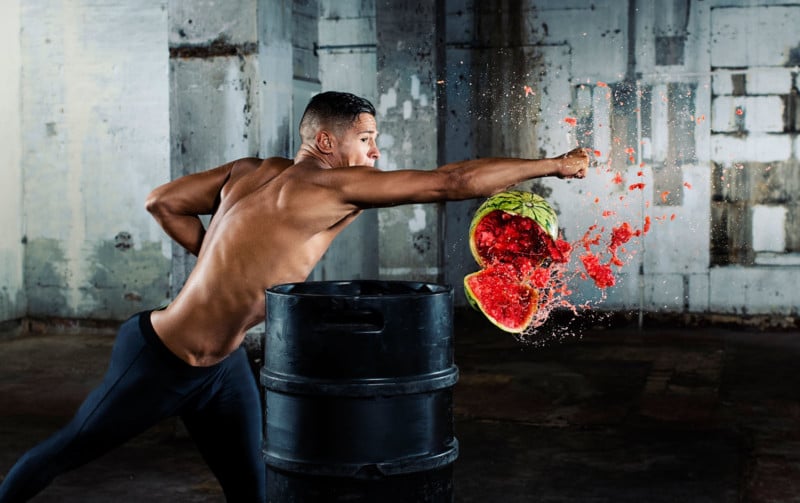 In September I shot a campaign for Nikon using its new D500 camera, in which the brief was to demonstrate how fast, powerful and robust it was. We set about capturing split-second moments of impact, photographing scenes that would otherwise be impossible to see with the naked eye.

To illustrate this, I shot world champion mixed martial artist Tom “Fire Kid” Duquesnoy smashing a series of foodstuffs to pieces. Capturing all the action with the D500, we were able to show precisely what happens when a trained fighter hits an object incredibly fast, at full force.

Frankly, give me any excuse to smash stuff up and make a mess, and I’ll take it, but the shoot did present a few technical challenges. The main challenge of course, was freezing the moment of impact precisely and sharply, not just catching it in the first place.

My thought process for achieving these images went something like this:

I need to freeze Tom’s motion and the object Tom is going to strike.

I could shoot outdoors on a bright sunny day, but sunny days are not guaranteed in the UK in September. If I shoot indoors, I can control the lighting, but I will need a lot of light to get a usable shutter speed and aperture.

I want to use the burst mode on the D500 to allow me to shoot at 10 frames per second. This gives me a big “safety net” and a better chance of catching the peak moment when something gets smashed.

If I use the flashguns at full power, they take five or six seconds to recharge each time, so I’ll only get one shot.

If I turn the flash power down, they’ll recycle much quicker, but I won’t get as much light.

I could turn the ISO up. The Nikon D500 works brilliantly at high ISOs, and produces hardly any noise.

I’ll turn the ISO up high enough to allow me to run the flashes at 1/16th power, then I can fire off at least a 10 frame burst before the flashes need to recharge.

I’ll set the camera to the maximum flash sync speed (1/250th second) and an aperture of f5.6

An added bonus of turning the flash power down is that the duration of the flash is now very short – something in the region of 1/10,000th of a second. This is the only light falling on Tom and the things he’s striking and this effectively becomes my shutter speed. That should be fast enough to freeze everything.

So, I’ve got a setup where I’m shooting at 10 frames per second, to give me a wide margin of error for capturing a great moment. I’ve got my flashes turned down to 1/16th power, and thanks to a combination of my own, and a few loaners from Nikon, I’ve got 11 of them.

With a shoot of this nature, the key is co-ordination. We need to think about how Tom is going to strike the object, where I’ll shoot it from, where he and the object will end up after impact – everything needs to be worked through, and if possible rehearsed. For some objects, we had lots of “ammo” and could attempt a few takes, but a couple were one-offs.

Tom was superb at this – almost everything you see was captured on the first take. The only time we weren’t co-ordinated was with a 20KG bag of flour we rigged to an overhead gantry. It didn’t quite behave as we expected on the first take, and collapsed after Tom had punched it just a couple of times. We taped it all back together for another go, only for Tom to kick slightly ahead of the “action” call. The result was a lot of flour, and a slightly missed moment of impact. Given that he nailed another nine objects in one go, I don’t think that’s a bad success rate!

Of course, one of the biggest challenges besides the technical photographic side was choosing the right objects to smash, and then preparing them for impact. We trialled a few options before the shoot, and one of the crew even volunteered to take a baseball bat to a watermelon, but after much deliberation (and mess) we settled on the following foodstuffs.

Should you ever find yourself with a need to smash these up, here are the “recipes” we used:

1. Take 1 large, over-ripe watermelon. If you can’t find a really ripe one, or can’t be bothered to wait, zap it in the microwave for a bit.

2. If microwaved, allow to cool – no-one wants to go to hospital with watermelon burns.

3. Don’t get too close – they give off a very unpleasant smell once they’ve been cooked.

4. Place on a suitable pedestal, or have an assistant throw it towards you.

Clean up after yourself. I can promise you the bits of watermelon will spread further and wider than you might expect.

This made quite a fantastic noise – a mix between a thud and a splat. 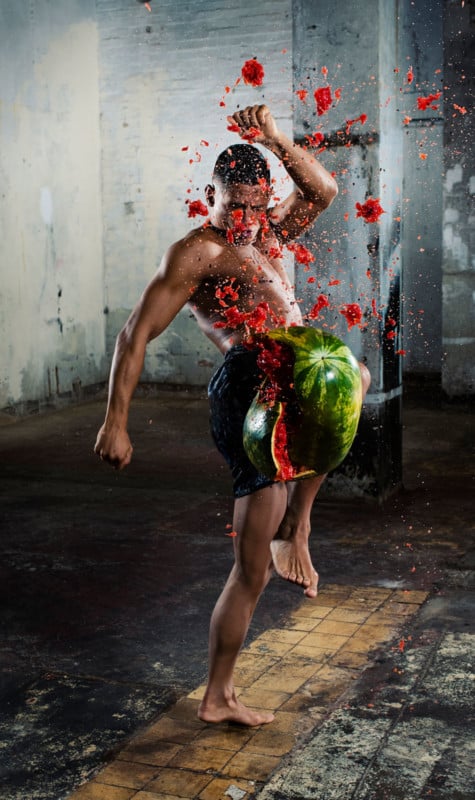 1. Take some large freezer bags, and fill about 1/10th full of water.

2. Lay very carefully flat in a freezer. You’re aiming to create a sheet less than 1 inch thick, so add or remove water as required

4. Mount in a suitable way. Here we used two C-stands, and some clamps, but you could rest the sheet between two supports, and chop down through it.

5. Don’t hang about too long – unless you’re doing this outside in winter, the ice will start to melt, and start to slide out of its mounts.

(Make sure whichever mounts you use are VERY firm. Otherwise there’s a risk they might swing round and try and clock your subject one in the eye. This might have happened to us. Just saying)

2. Pierce the carton just enough for your subject to get their fingers in. Unless your subject has their own claws, in which case, they can pierce it themselves.

Be prepared to get very sticky. I’d suggest a good hosing down of the entire area afterwards.

See: Watermelon. They smell different, but otherwise all instructions are the same.

1. Buy the largest eggs you can find – they’ll be easier to see and hit!

2. Stop them rolling about the place – we built very simple little “nests” for them out of black cinefoil 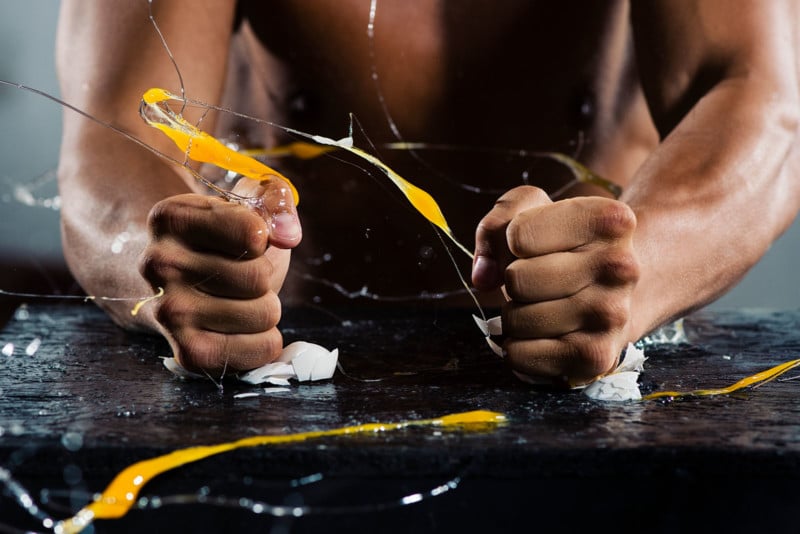 1. Buy (or make) a cake you don’t mind sacrificing. Do not do this at birthdays or weddings. You are unlikely to be invited again.

2. Place it on a suitable surface. I was very concerned that the table we used would result in Tom catching his shins as he kicked. I needn’t have worried, as he can kick with such precision, but do bear this sort of thing in mind.

3. Clear the surrounding area – this one is going to go everywhere! Eat any leftovers that have remained intact. Or summon the family pet to come and eat anything that’s hit the floor.

Stay tuned: tomorrow I’ll go into more detail about how I lit everything with all those flashguns, and froze the action.

About the author: Tom Miles is a professional photographer and educator based in London who specializes in shooting sports, features and portraits. You can find more of his work, writing, and teaching on his website, blog, Twitter, Instagram, and Teachable.