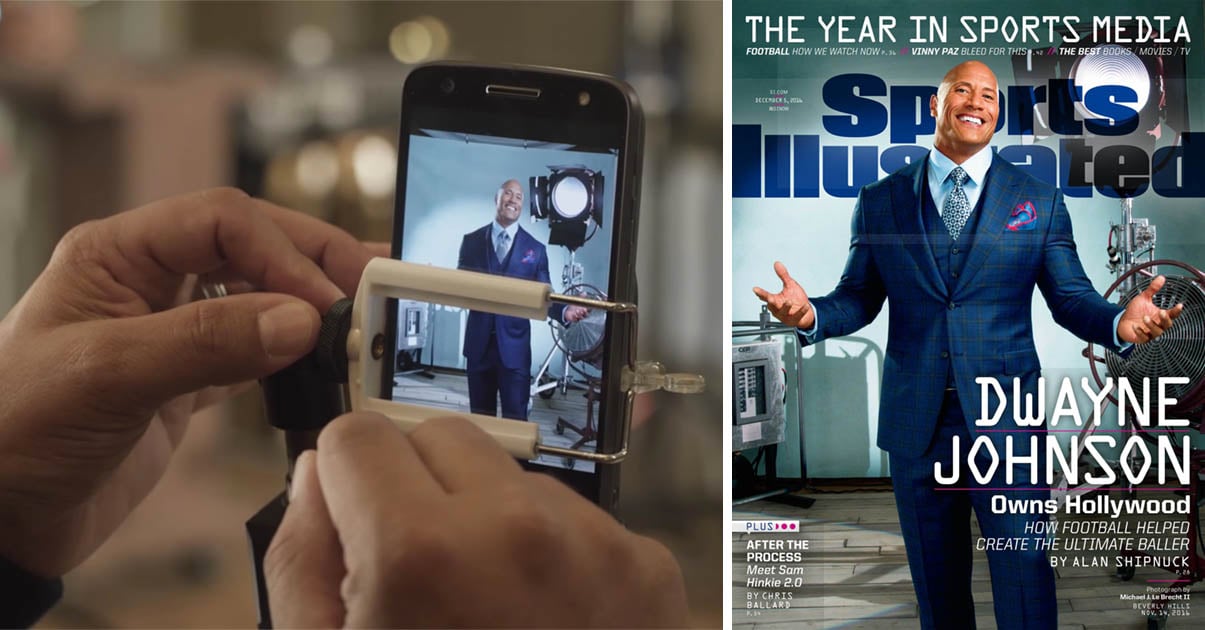 When veteran SI photographer Michael J. LeBrecht II got an email from a DOP at Sports Illustrated offering him the chance to shoot “an A-List Celebrity,” he immediately said yes. It wasn’t until a later, on the phone, that he hear the catch: “we would like you to try and shoot the cover with a Smartphone.”

His response—”Wait, What?!”—is what most of us would have said. But given the opportunity to shoot current “sexiest man alive” Dwayne ‘The Rock’ Johnson, he agreed enthusiastically. Before he knew it, he was back home holding a new Moto Z smartphone complete with a Hasselblad True Zoom Moto Mod attachment, ready to give it a shot.

“I began to familiarized myself with the menu settings and started testing immediately,” LeBrecht tells PetaPixel. “I first shot with available light, and then used continuous lighting and found the images to be very good. Knowing I would produce much more power on set, I had confidence going in the image quality would hold up.”

You can see LeBrecht using the Moto Z and Hassy Moto Mod in the behind the scenes video below. There’s even a bit of video from the moment he took the shot that would ultimately wind up on the cover:

And here is the final cover shot in all its glory: 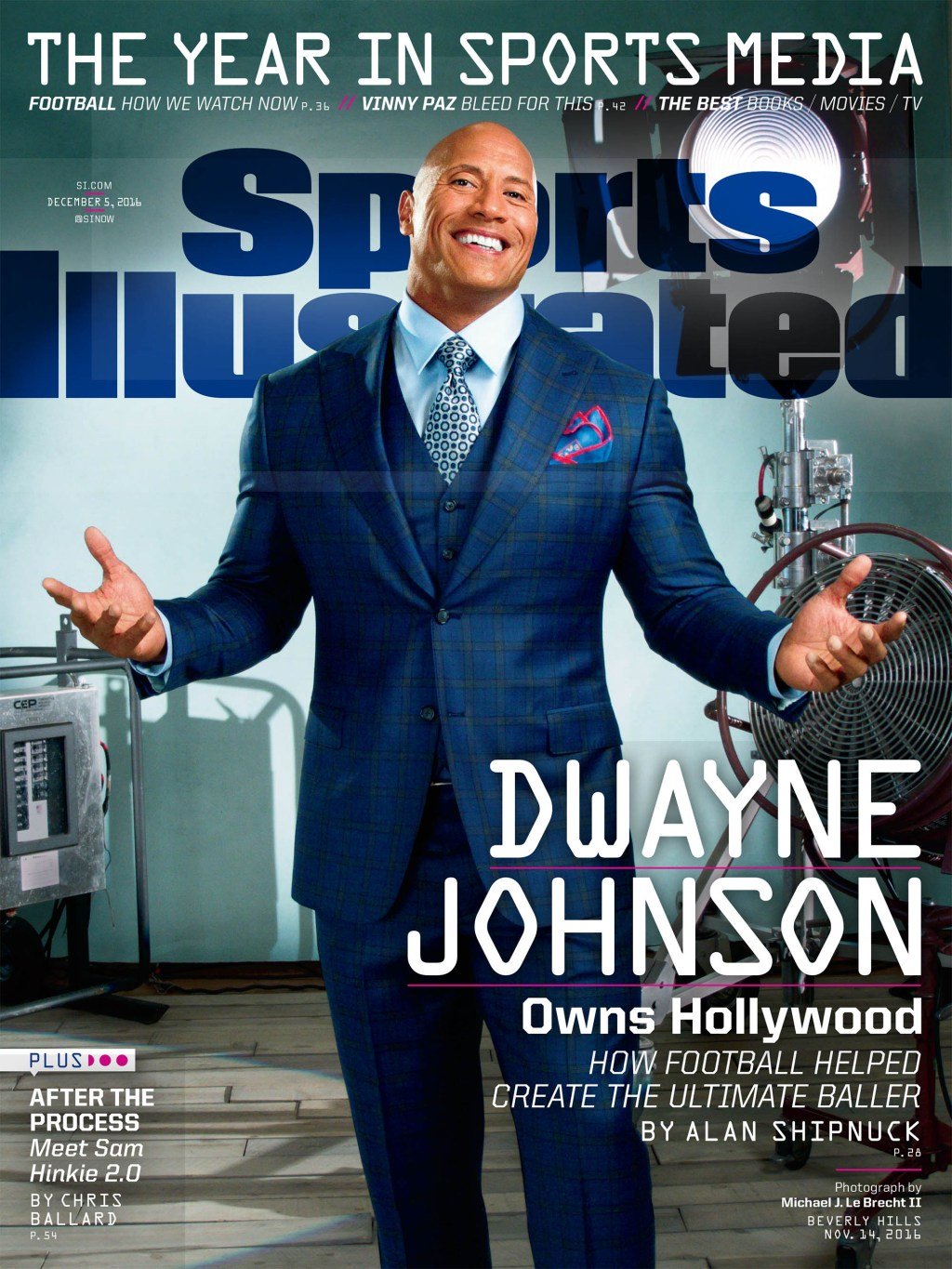 We spoke to LeBrecht to find out what it was like using this powerful new smartphone camera, and he was overall very positive about the experience.

“Working with the Moto Z Droid with Hasselblad True Zoom Moto Mod was an easy transition,” he tells us. “The feel of the device was very comfortable in hand and the professional settings display provided access to control my exposure settings.”

The only real challenge he faced came from the mount he was using. Because of how the Moto Mod works, he had to mount he phone backwards, partially covering the screen while he was trying to shoot: 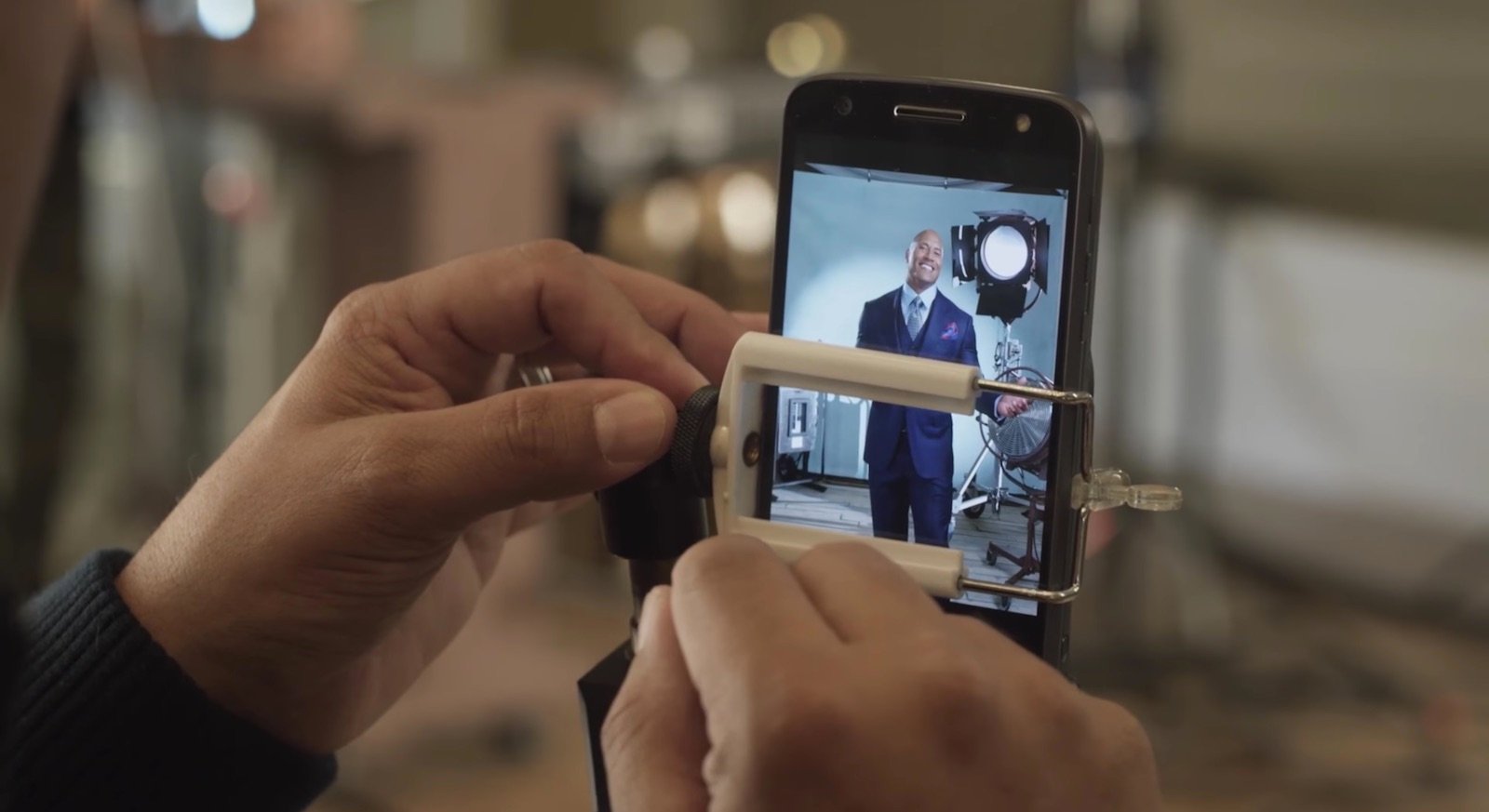 “The phone worked fantastic and was very fast to work with. What you see is what you get, and I was able to review the images quickly on its 5.5 inch display,” continues LeBrecht. “After shooting 12 images, I shared the images with my subject, and we decided to shoot a few more for better expressions. On my last frame, the 18th total image, we nailed the cover.”

As for how the phone compares to a DSLR, LeBrecht is quick to point out that it’s an unfair comparison. He sees the Moto Z/Hasselblad Moto Mod combo as more of a learning tool than professional camera.

“I don’t believe it’s fair to compare Smartphone Cameras to DSLR Cameras,” says LeBrecht. “But for everyday use and for aspiring photographers looking to develop photographic knowledge, the Pro settings on the Moto Z allow for the instant understanding of some of the same settings you will find on a DSLR.”

Speaking of DSLR, here are a few outtakes from the shoot. These were not shot with the Moto Z; LeBrecht instead used his usual camera, a Canon 5Ds. 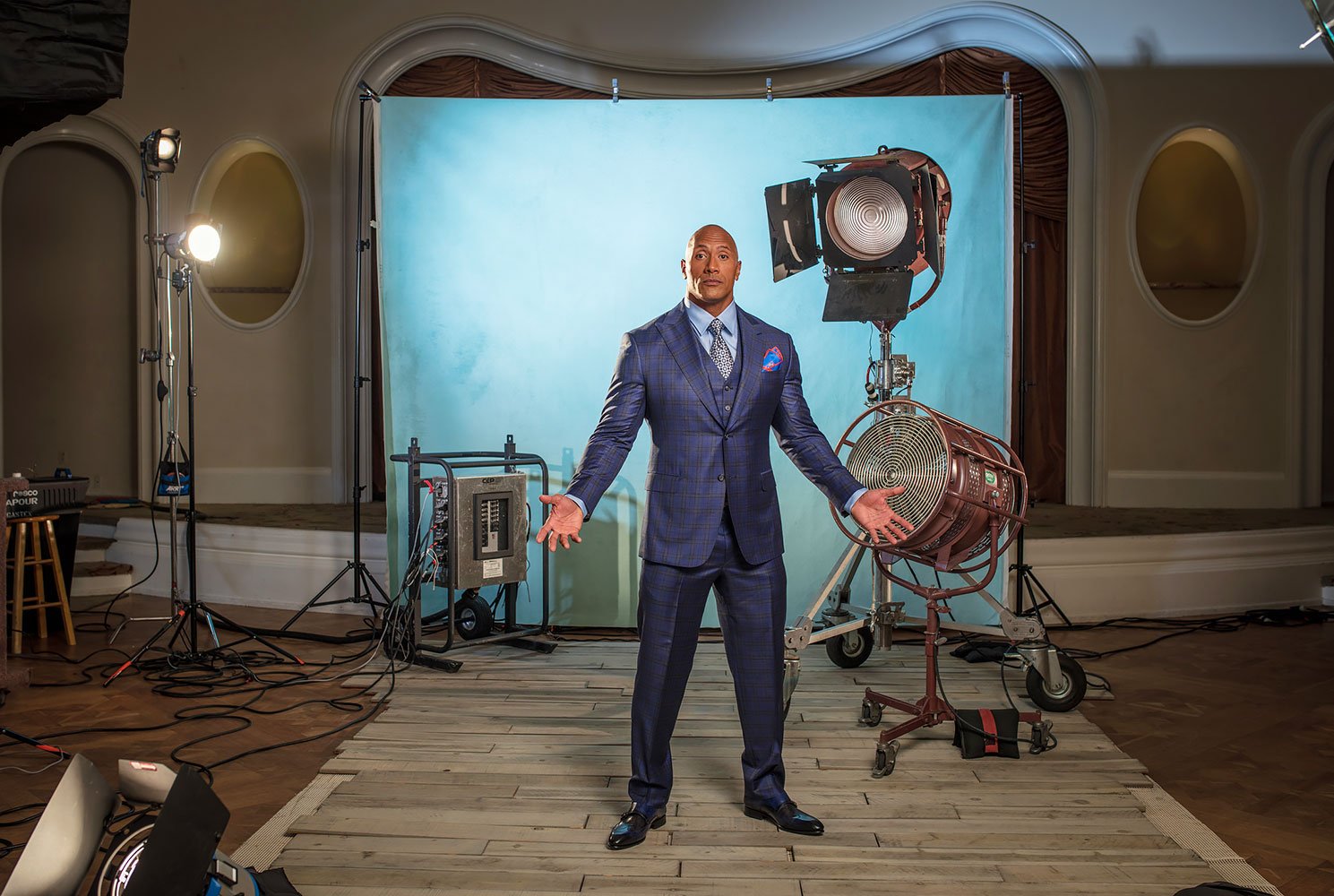 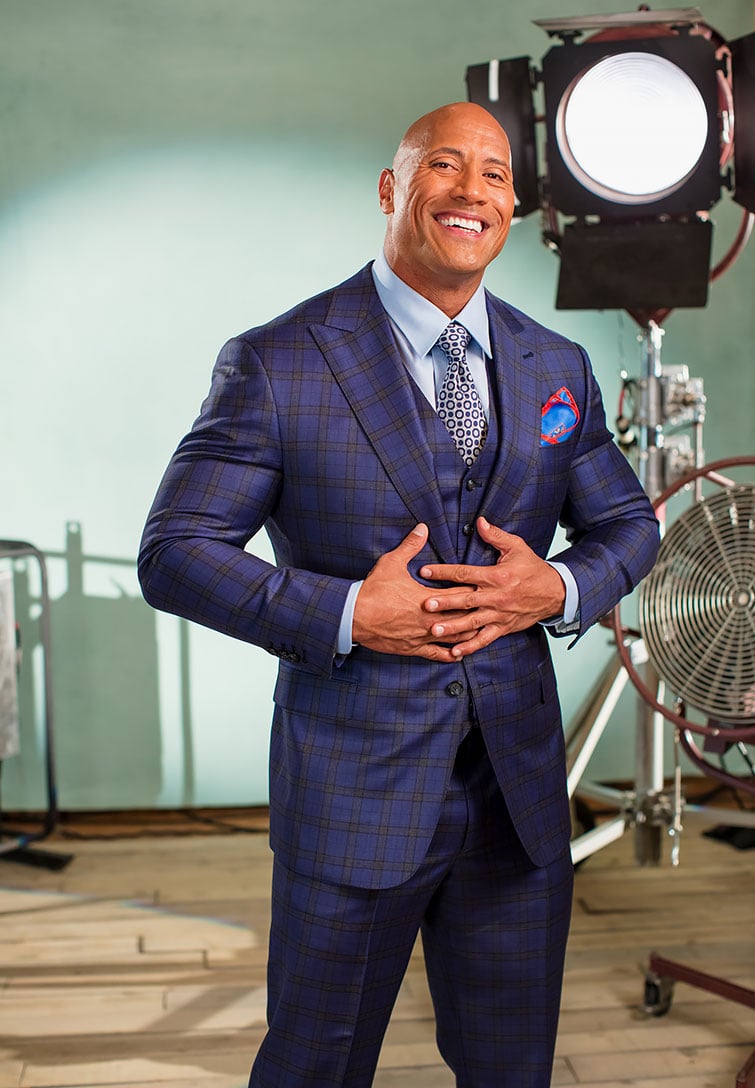 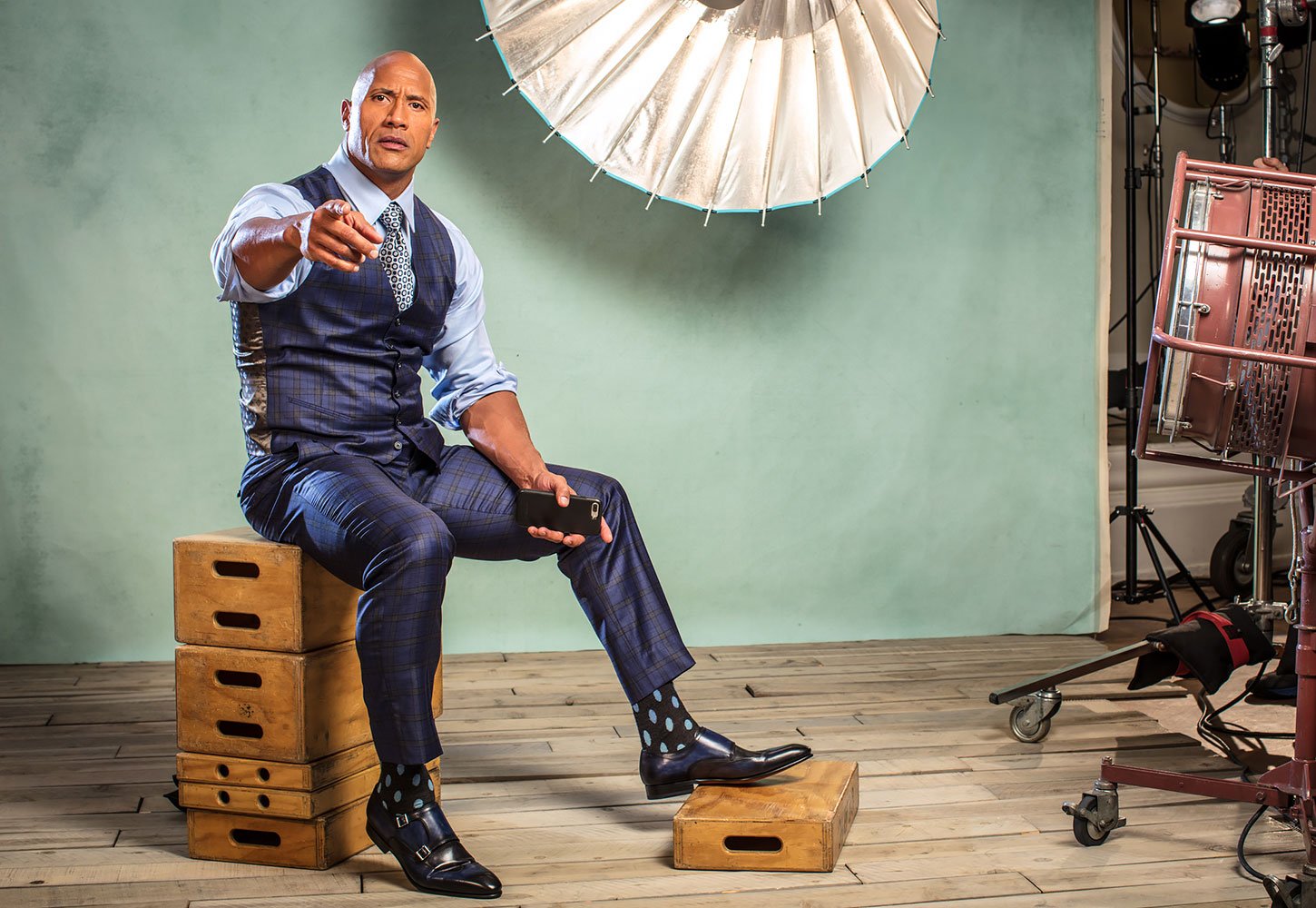 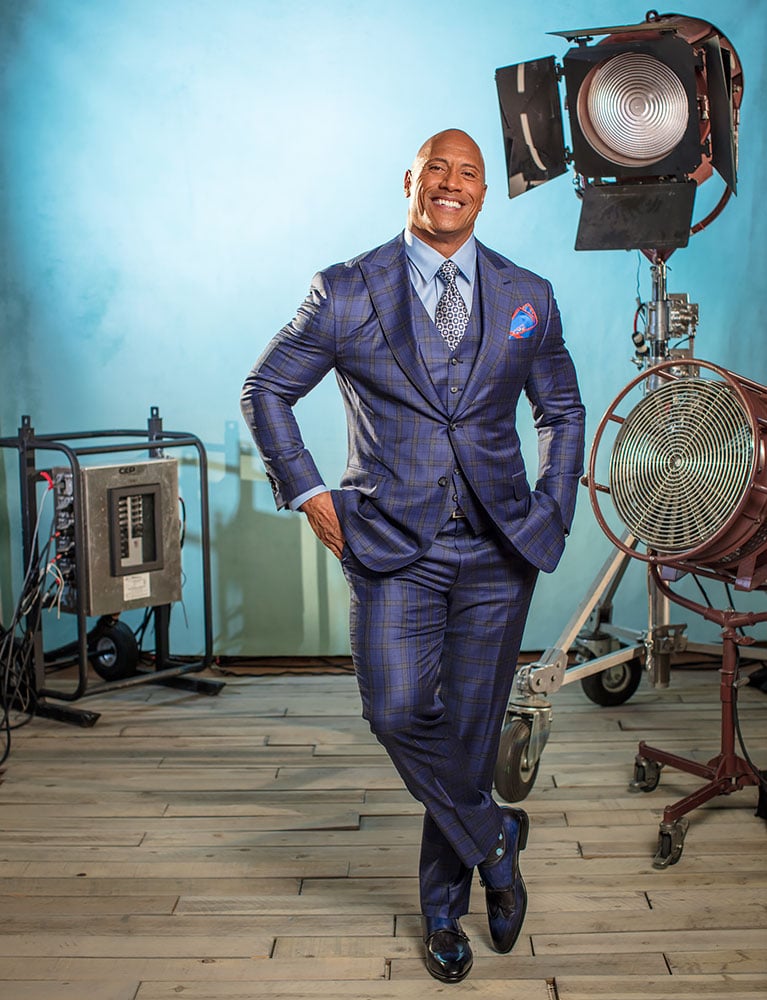 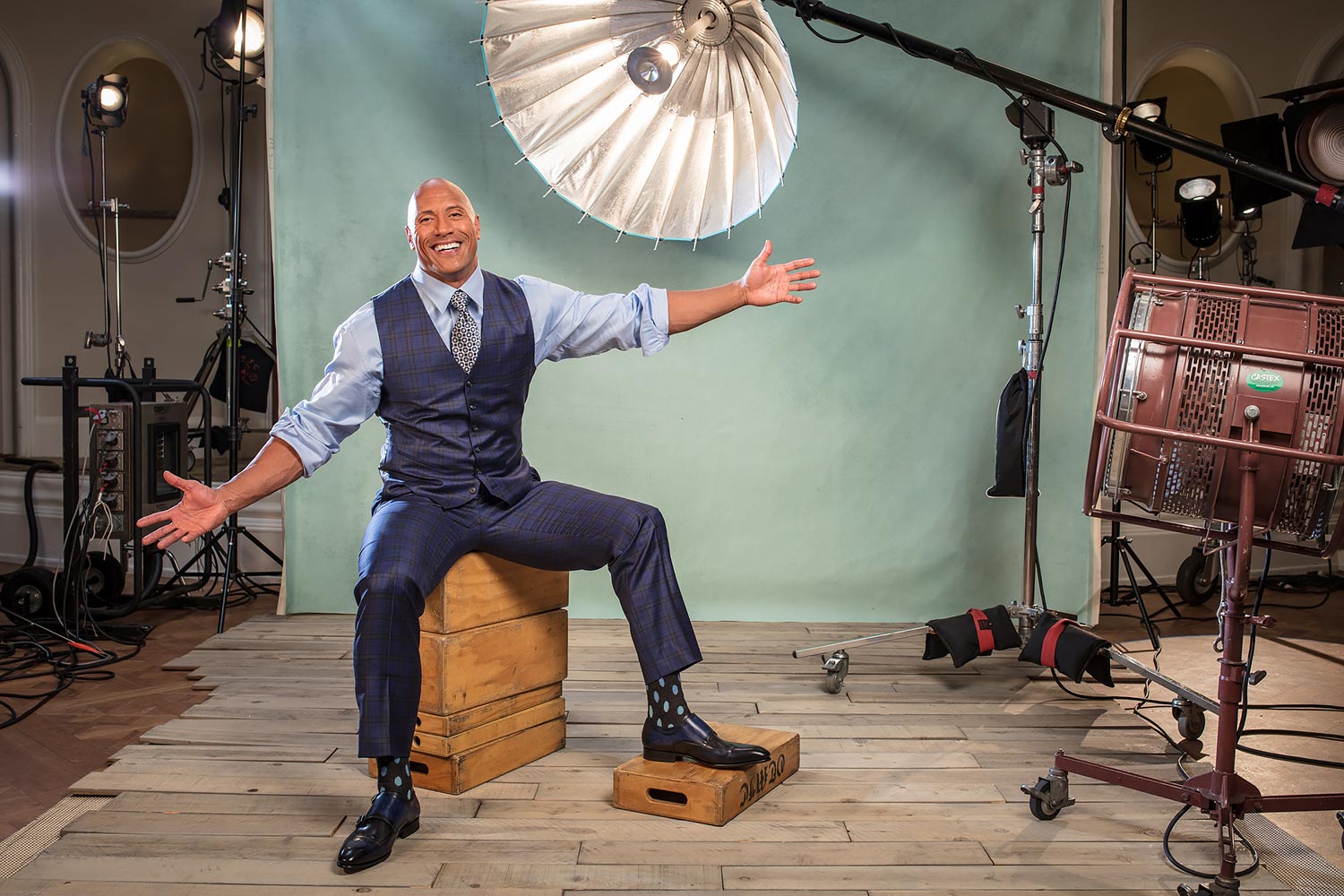 You can see a ton more outtakes/BTS shots here, and read Sports Illustrated‘s full article about the Rock here. But before you head off to SI.com, or restart the “photographer vs camera” debate in the comments, let us leave you on an inspirational note.

In the video up top, Johnson talks about how being on the cover of SI had been his dream from childhood, but he’s not the only one who was living a dream in that video. “My dream as a kid was to work for Sports Illustrated, and that dream has come true,” LeBrecht told us. “For 20 years I have been living my dream.”

Next, he plans to transition into shooting movie posters for Hollywood’s biggest studios. “There is no blueprint on how to make it, you have to find your own way,” says LeBrecht. “Having the opportunity to photograph the highest paid actor in Hollywood, who also happens to be ‘The Sexiest Man Alive’ and one of the nicest celebrities I have ever had on set, is a good place to start.”