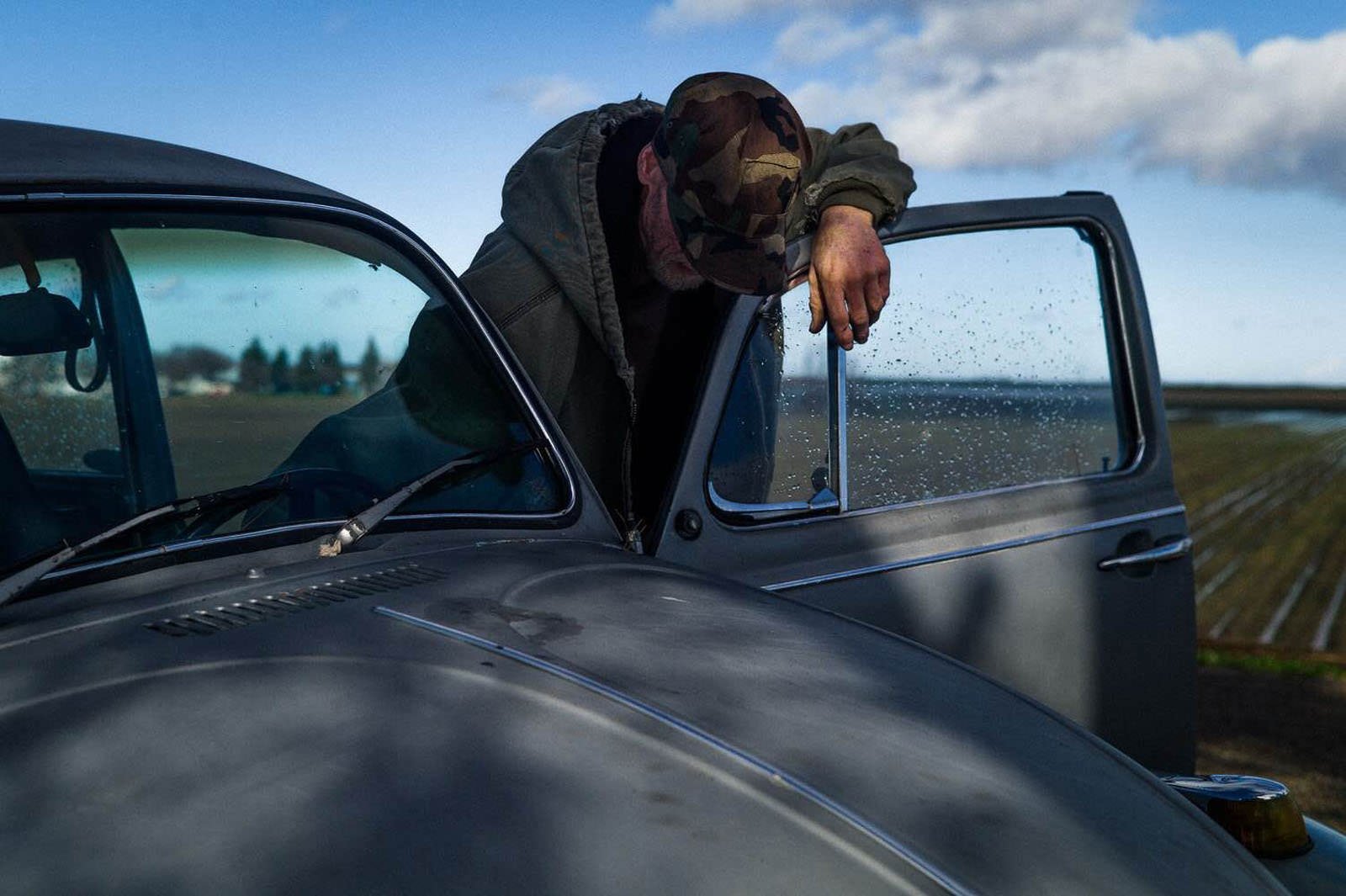 A man I know as Jay reaches into his car to try to force his engine to kick over, leaning deeply into the door as if the weight of the world is upon him in this moment. Each detail, as frivolous as the last, lends itself to the mystery of the frame.

Such as the water drops that freckle the windows of the car or the gentle, downward tilt of Jay’s camouflage hat. They ask more questions than they answer. The clouds stop the sun from reaching the hood of his car, thus forcing a ghostly figure upon it as if they themselves lay hedonistically in view.

Not one element exists to truly make an image great but instead it remains the culmination of many chance accidents that do this. Still, the most powerful thing about this photograph is not what it is but what it is not. This image is not a perfect picture — the shadows fall upon the subject and block his face from view, the uneven light leads the eye awkwardly through the frame, although saved by the composition — but that is why it is so successful.

As artists, it is of course our desire to perfect our craft. Every other vocation, trade, skill or medium requires this of their practitioners. We always want to get better. There lies within this endeavor, however, a longstanding fallacy that we simply must have better tools to be better photographers and we must display total mastery over them; our images are only worth their technical mastery as if great art is only determined by its technical elements.

While it is important to know the tools with which you work and to have reliable, quality equipment, and to display this mastery, the industry overall has become obsessed with technical proficiency so much so that the contents of a photograph are often forgotten.

Many conversations about photography currently revolve around subjects such as sharpness, prime or zoom lenses, and full-frame or crop sensor. Photographers drool over the newest gear and constantly fool themselves into believing that it will make them a better photographer.

I was guilty of this for a long time. I believed that if my photograph displayed perfect lighting, sharpness and composition that it would be a good photograph however, I was foolish. The images refused to convey anything past what you saw at first glance. There was no narrative, no deeper meaning. They refused to force the viewer into the image, to navigate it’s meaning and interpret it. I simply believed, like many others, that if my photograph was technically good then I would be successful.

While anybody can learn to light or shoot with the best cameras and sharpest lenses, it takes a true master of the craft to use this understanding of how the medium works — in all of it’s forms — and force it to conform to their vision. 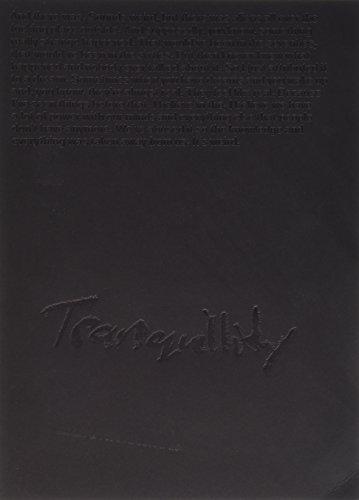 As I turn page after page of Heikki Kaski’s book, Tranquility, with its charcoal black cover, the title nearly lost in the invisibility of its blackness, I sit confronted with the fact that it is hard to enjoy these photographs.

At first glance, I would generally look away. The first photograph in the book, out of sequence with the others, is what looks like a geyser in a valley of dust, completely meaningless when viewed in the context of itself. When we, the viewer, fail to navigate a photograph’s meaning and instead reject them as bad, because it fails to constrict itself to the preposterous rules of the game of art which are ever-changing, we lose an opportunity to realize what makes this medium so special.

This book I have propped open in my hands, each page cusped between fingers I use as markers so I don’t lose my place and so I can quickly compare and contrast the images against each other in my attempt to interpret their meaning and find the narrative, is about a small rural town in Central California named Tranquility, a name the book shares as well. It contains many different types of images all falling under the documentary tradition yet sitting dangerously close to entering a world of high art that few care to understand.

This book, however, is about far more than the town of Tranquility which the artists uses simply as a setting for the larger narrative, for challenging the way we see and look at the world around us and how it is always changing.

Two portraits flank each other on contrasting pages, the subjects stand in the center but their faces are obscured by what appears to be a leak of light falling over them however, it is apparent the photographer intentionally made it so. 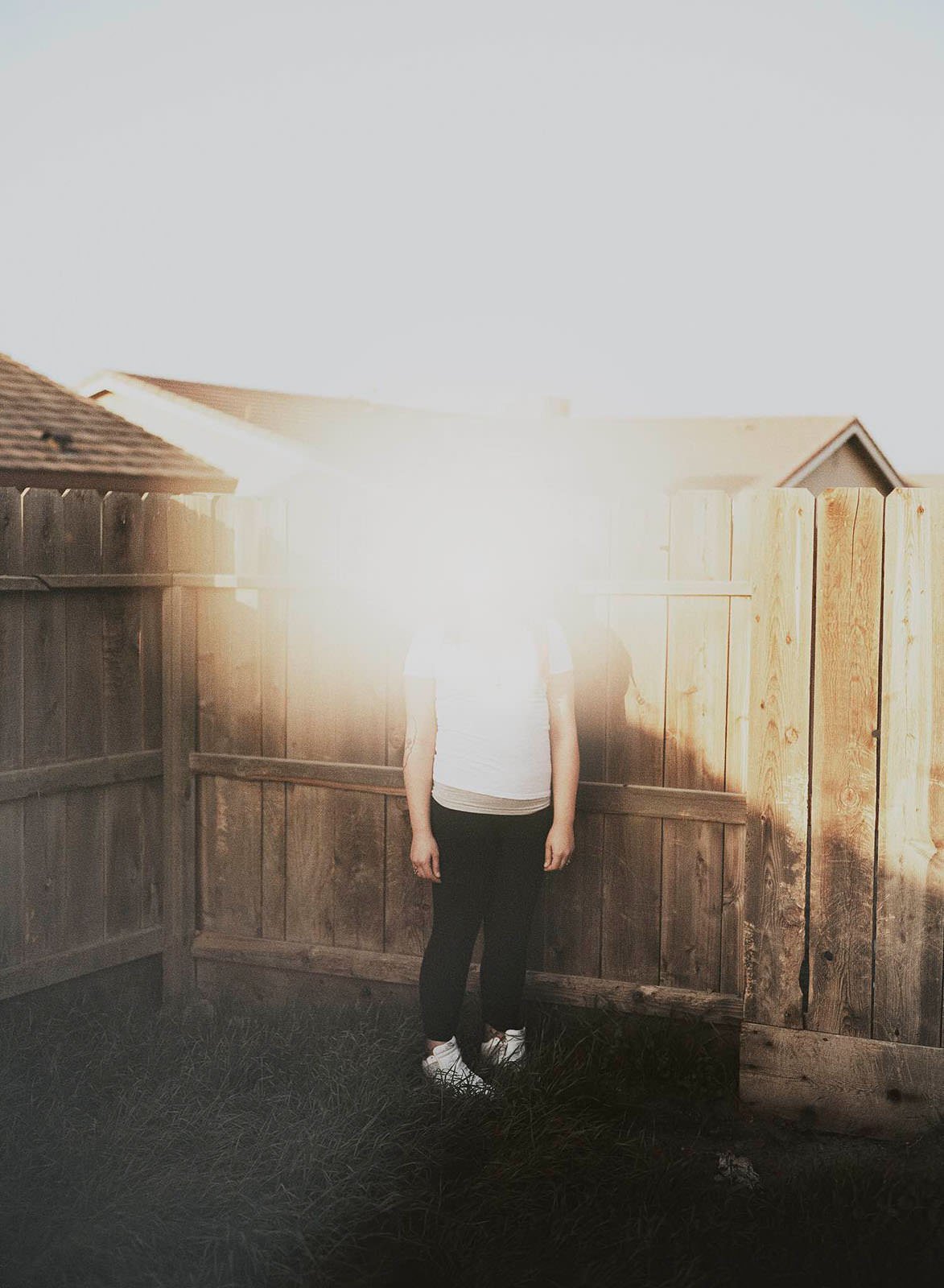 Or, take for instance, an image from the front of the book that shows a tree with branches having fallen to the ground. The light is bad and contrasty and nothing in particular grabs your attention. It could easily be written off but after looking through the book you understand it’s purpose.

All of these images are integral to the book’s narrative of understanding what is right in front of us and how we interpret it. By forcing you to look a little bit longer and to find the meaning on your own, this is proven. This book challenges many misconceptions about what makes a great photograph. Images like these, the ones that are difficult to look at, often incorporate the most meaning.

I enjoy reading critiques of images, especially when they are of my own. One problem I see often is that photographers like to critique based on technical value of an image rather than attempting to critique what the image conveys and try to measure its success in doing so.

I’ve had photographers call my pictures amateurish simply because they didn’t believe the lighting was great. Once, a photographer told me an image of mine looked like it were shot on a point-and-shoot camera as if by saying that, he were establishing that the image was inherently bad.

I detest this language when discussing photography. Many photographers use point-and-shoot cameras either out of necessity or because it is the best for the job. For instance, famed Japanese photographer Daido Moriyama is known for his use of the Ricoh point-and-shoot camera. Although these cameras are highly sophisticated and capable of much more than they’re often given credit for, Moriyama’s use of them speaks paramount to his skill and his realization that it matters not which camera you use.

In addition, Moriyama’s images speak with a fury that can be conveyed only in their imperfection. Deep, inky blacks contrast against near-white highlights in almost every black and white image of his. While most would ignore these images as bad, which they technically are, they convey much more than meets the eye. Spending more than a few seconds with a Moriyama photograph, you quickly realize that his snapshot-esque style of documentary photography shows a side of Japan few outsiders ever notice. Every photograph that he takes expresses his reality and by throwing technicalities to the wind, Moriyama is free to experiment with composition and lighting so much so that each image becomes remarkably true to him.

It has been repeated so often that I merely need only allude to the fact that we live in a world oversaturated with images. This overflow has created a world not where everybody is a photographer necessarily in the sense that they shoot with intention, but instead it has a created a world where everyone can understand the power of photography and by looking at more and more images each day, they slowly become more literate in the language of photography.

This demands that images must be more than a specimen of technical prowess and should challenge the viewer to read through it. That is, if we want our images to be remembered by the audience, we must require of ourselves that we shed the restrictions behind the fallacy of making a perfect picture and instead, work toward building the narrative of the image, further propelling the medium. Images that are beautiful may be nice to look at but will often be forgotten in a matter of seconds. Images that are ugly, that contain a story but force the viewer to search for it, stay embedded in the consciousness of society and have the potential to outlive their creator.

With all of the discussion about purposely shedding technical skill by way of narrative skill, it must be said that this does not mean we should not strive for a high level of technical proficiency. I simply must direct attention toward the reality that photographers have forgotten our ability to tell stories and change the rules. In order to do either, we must understand the fundamentals of the medium but only so far. It is not necessary to understand how to use every piece of equipment or photograph every situation a certain way. At some point, we must give way to our own voices and allow that to influence how we work and what gear we use.

It is a combination of enough technical skill to produce work that fits our vision and voice along with a heightened capacity for complex storytelling that truly makes an image, and it’s maker, remarkable. A writer does not write simply to express their ability to combine words in a sophisticated manner. A painter does not paint to show how well they can paint a sky or a human face.

We have reached a point where our audiences demand to be told stories in complex ways and must be forced to read through the images. This, is the failure of the perfect picture.

About the author: Alex Thompson is a documentary photographer living in California’s Central Valley. The opinions expressed in this article are solely those of the author. His work focuses around environmental issues and the social consequences of environmental degradation. His work has been featured in publications like LA Weekly and The Guardian US and he is currently working on long-term projects documenting the effect of extraction in Wyoming and life in communities along the SF Bay-Delta. You can find his work at www.alexthompsonphoto.com or on Instagram @alexthompsonphoto.