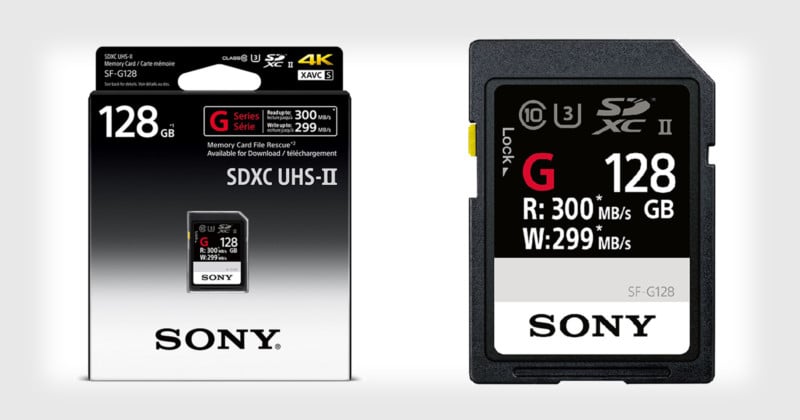 Announced ahead of CP+, the SF-G cards come in 32GB, 64GB, and 128GB sizes and boast some blistering fast read/speeds. Specifically, these little cards can read and write photos at 300MB/s and 299MB/s respectively. As long as your camera supports UHS-II, you’ll be able to take advantage of these speeds for burst shooting, 4K video, and other buffer-busting uses.

Additionally, these cards are waterproof, shock proof, temperature resistant, and X-Ray proof. And on the off chance you do manage to corrupt some of your images, all three SF-G cards are compatible with Sony’s file rescue software.

Finally, the three SF-G cards were announced alongside a PC card reader that will let you take advantage of the speedy cards when transferring photos to your computer. The MRW-S1 is a card reader built specifically for the SF-G series (although any UHS-II reader should work…), sporting a built-in “SuperSpeed USB (USB3.1 Gen.1) standard A port” that should leave your PC’s standard SD slot in the dust.

No pricing for either the new cards or the reader has been released yet, but the SF-G cards will be available starting in March and the card reader will follow shortly after in April. To learn more, head over to the Sony UK product page for the new memory cards.