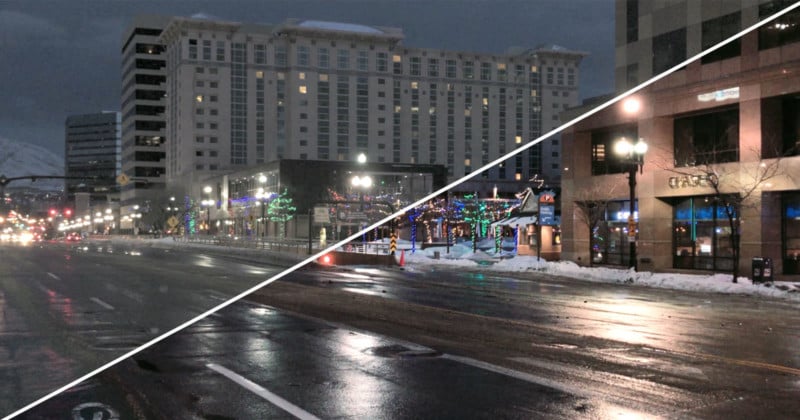 Sometimes people ask me why I started shooting videos on a phone and the answer is not that easy. I believe the best camera is the one we always have with us, in our pocket. Maybe it’s not the most powerful of course, but at least we can bring it with us all the time.

What crazy, if you think about it, is that we can now shoot 4K videos with our smartphones.

I also love challenges. Shooting a $500,000 dollar commercial on a RED Helium 8K and two trucks full of any lights and gear could be relatively easy. I’m not saying anyone can shoot a cool commercial just because of the budget, but when you have 100 people working for you, police stopping the traffic and shutting down bridges or roads to let you shoot your film, well, that is definitely easier than going out there with your wife and your iPhone trying to shoot something cool.

​​As we all know, the native camera app on our smartphones is, most of the time, not that good. That’s the why there are so many third-party camera apps out there. One of the best, if not the best (at least for videos) is Filmic Pro. This app became popular because of the film Tangerine, which was film entirely on the iPhone 5S using Filmic Pro and Moondog Labs’ anamorphic adapter (in my opinion the best smartphone lens out there).

Filmic Pro allows us to manually expose and focus our clips. It also allows us to choose the resolution, the bitrate and the aspect ratio. This is very cool because we are now able to shoot 4k videos at 24fps (cinema standard) and 100Mbps in a super wide aspect ratio.

Recently Filmic Pro sent out the beta version of what I consider the biggest update ever for this app. The interface is completely redesigned, but the best feature is that now we’re able to shoot with a Log/Flat picture profile. This is a huge deal, considering this is just a phone.

Shooting Log/Flat is usually a feature that we find on high-end cameras like Sony, Blackmagic, Canon Cinema, RED or Panasonic GH4/GH5.

So what does this mean? Basically we record a super flat image (low saturation, low contrast, low sharpness) in order to capture more details and more dynamic range. Of course the footage will look weird at the beginning, but this is totally normal. Once we start grading the clips in post production we’ll be able to apply a (Look Up Table) LUT to convert the Log into Rec. 709. We can also increase contrast and saturation manually without using a LUT.

This will open up a lot of possibilities in post production for more creative color grading, but again, the biggest advantage is that we’ll be able to capture those details in the shadows and in the highlights that would otherwise be lost.

As you can see in the screenshots below, sometimes I had to crash the blacks to avoid the noise, and that’s very common even in the Sony Slog3. I actually notice a lot of noise when you setup the exposure for the highlights, but this happened probably because the app is still a beta or maybe just because the sensor on a phone is super small. What is sure is that you will notice way more noise shooting Log on any camera.

From a colorist point of view this is huge and will also allow beginner filmmakers or cinematographers to experiment in post production without spending a fortune for a camera.

Here’s a 2-minute video with test footage I shot:

Am I saying we should throw our professional cameras in the trash and start filming on iPhone? Nope, not at all.

I’m just saying that this is a very interesting feature to have on the smartphone in our pocket, and one that will allow indie filmmakers to achieve much more amazing results.

About the author: Matteo Bertoli is an Italian film director and cinematographer currently based in Salt Lake City, Utah. You can find more of his work on his YouTube channel, Facebook page, and website.