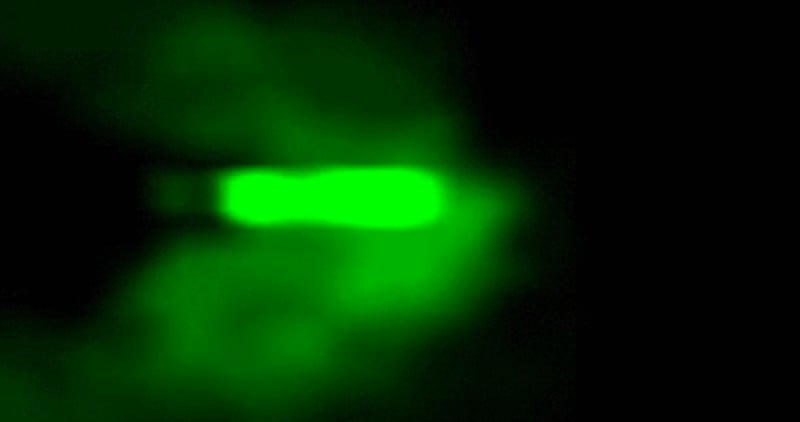 When an object breaks the sound barrier—accelerates to the point where it’s moving faster than the speed of sound—it creates pressure waves that result in what is called a “sonic boom” and Mach cone. Now, scientists have managed to captured a similar phenomenon for light itself.

In case you’ve never seen it, this is what it looks like when a fighter jet breaks the sound barrier. That cone is called a Mach cone, signifying that the aircraft just exceeded Mach 1: 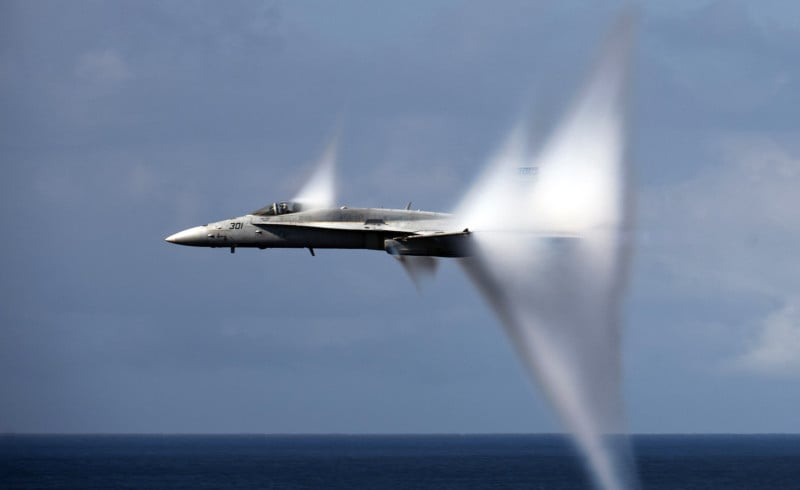 Scientists have known that light does something similar when moving from a medium where it is slowed down (like glass) into open air where it can move at full speed, but nobody had yet managed to capture this so-called “photonic Mach cone” on camera. Until Jinyang Liang and his team at Washington University in St. Louis, that is.

You use what’s called a Streak Camera, which can capture up to 100 billion frames per second:

The setup went something like this: Liang et al. designed a narrow tunnel sandwiched between plates made of a mixture of silicone rubber and aluminum oxide powder, and filled it with dry ice fog. Then they fired green laser pulses lasting just 7 trillionths of a second down the tunnel.

These pulses could scatter off the specks of dry ice within the tunnel, generating light waves that could enter the surrounding plates.

The green light that the scientists used traveled faster inside the tunnel than it did in the plates. As such, as a laser pulse moved down the tunnel, it left a cone of slower-moving overlapping light waves behind it within the plates.

The light was photographed from three different views, and once all of the footage was combined, it showed what the scientists had been looking for: a “photonic Mach cone” like the one that appears when an object breaks the sound barrier:

This recording is a breakthrough in and of itself, but the scientists themselves seem almost more excited about their camera, particularly when they consider the potential medical implications. It might even allow scientists to watch neurons fire and “image live traffic in the brain.”

That kind of breakthrough is decidedly in the future though. For now, we’ll be happy watching a laser pulse reach the speed of light, leaving a “photonic Mach cone” of light waves behind it.