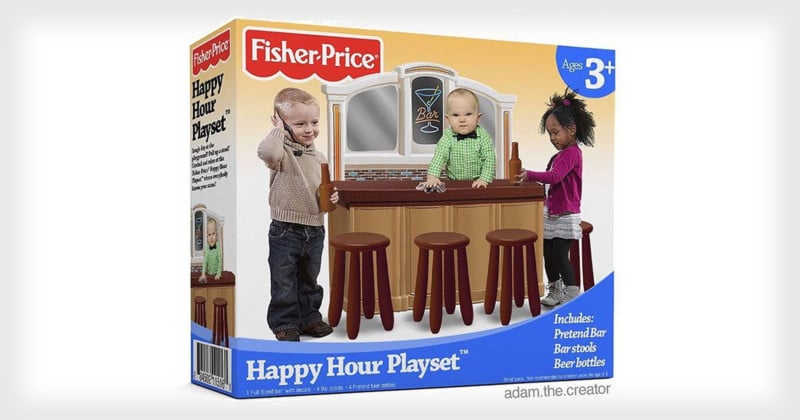 “Fake news” is one of the biggest real news stories of 2016, and sometimes Photoshop is involved. One of the latest incidents is widespread outrage over a new Fisher-Price “Happy Hour Playset” that lets kids play with a pretend bar. It sparked plenty of outrage from parents, but it was simply a faked box with Photoshopped photos.

Mashable reports that the faux Fisher-Price playset was the creation of branding expert Adam Padilla, who regularly posts clever original humorous images to his Instagram account.

After coming up with the idea from seeing his daughter play with a kitchen playset, Padilla whipped up the package design in Photoshop and posted it to his Instagram account as if it were real:

Whom wants this for Xmas? 😭🎁

With over 3,000+ Likes so far, the image has become one of Padilla’s most popular. Soon, it was spreading across the Web and fooling parents into believing that it was a real Fisher-Price product for kids.

Others responded positively toward the playset, expressing disappointment that it isn’t an actual product they can buy and asking Fisher-Price to create it.

Fisher-Price responded to the messages, telling each parent: “Please know that this product is not endorsed, produced or approved by Fisher-Price.”

This strange story “goes to show the power of the internet to take a story viral,” Padilla tells Mashable. “The right mix of pop culture and realism, with a bit of technical skill can really send something around the world pretty quickly.”

Padilla says he hopes this image inspires “creative thinking” and causes people to carefully examine things seen online and not believe it as fact simply because it was shared somewhere.