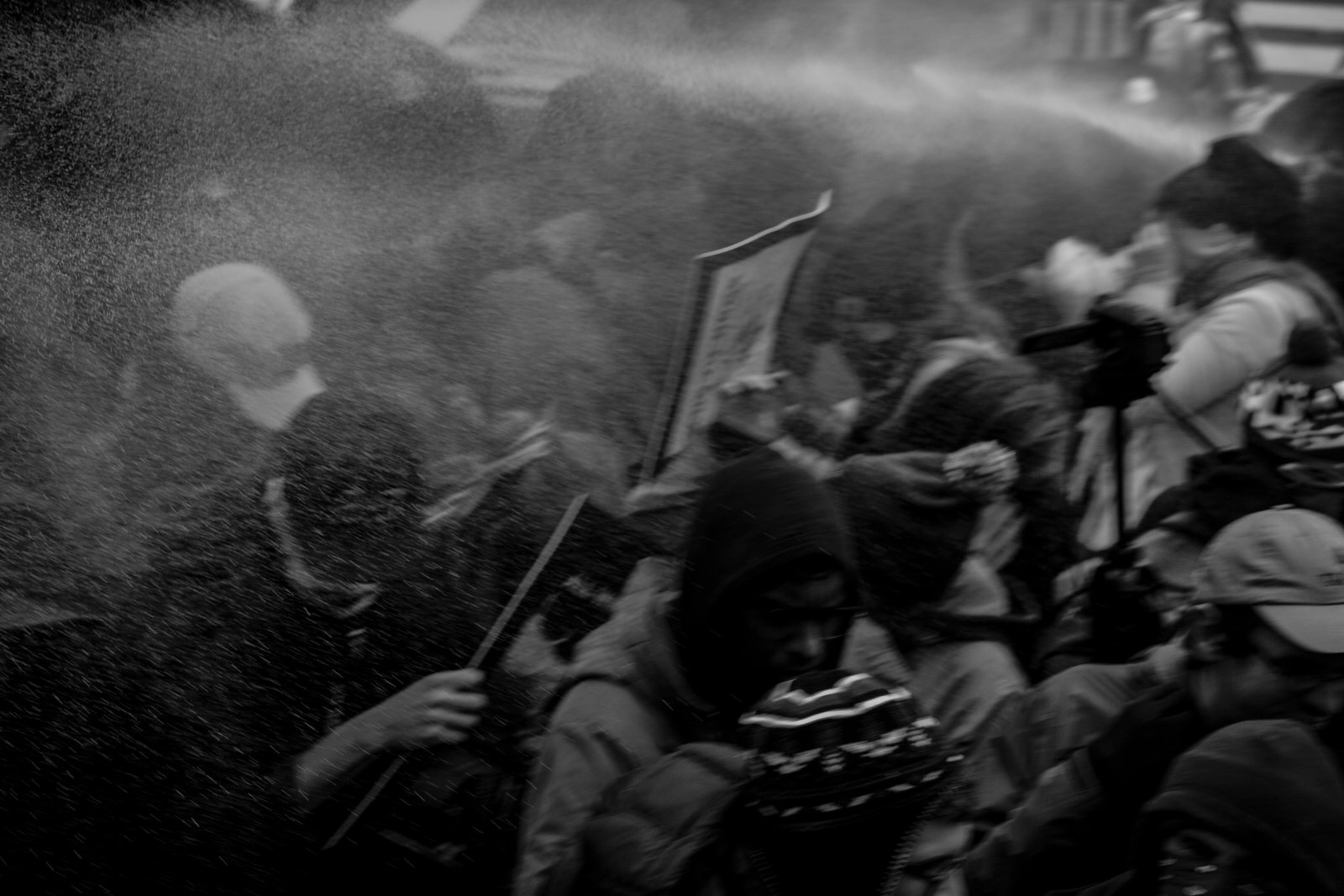 Yesterday, I went out to photograph the protests in Washington, D.C. during Trump’s inauguration. I’m a professional freelance photographer, and I had never really taken a stab at photojournalism before, so this seemed like a good time to try.

I followed a group of protesters and they ended up leading me to a big intersection where people were dancing and a band was playing; it was a pretty peaceful group, and everyone was having fun. I got some great shots of that. 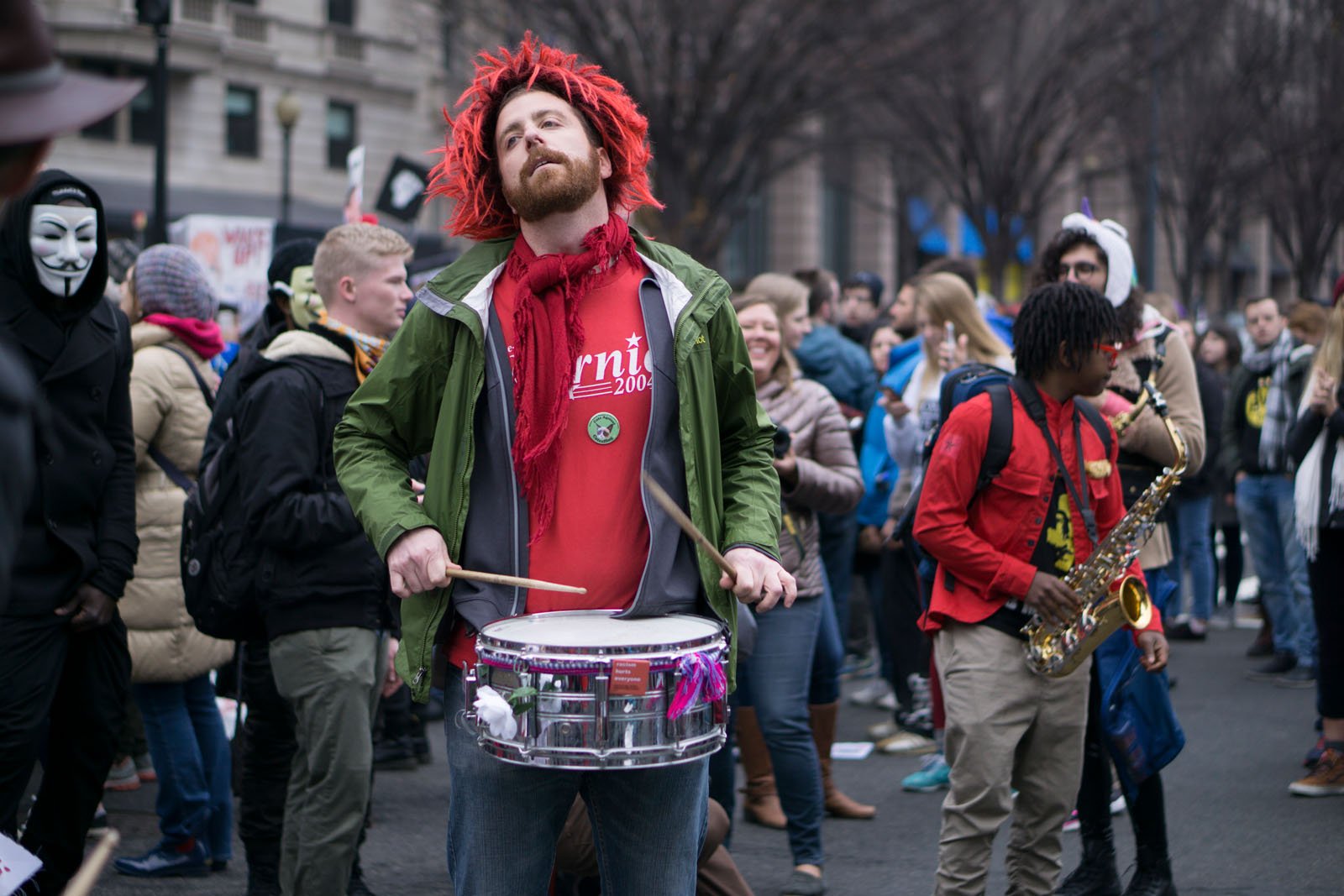 Maybe five or ten minutes later, a parade of protesters came through and absorbed that crowd — I tried to capture as much as I could and followed this new large group down the street. We came to an intersection and it was packed from corner to corner. The entire intersection was surrounded mostly by protesters with police forces in the middle — including a line of riot police decked out in full shields, masks, and mace guns. The protesters were chanting “let them go!” which I imagine was in reference to some people who had recently been arrested. Tensions were very high. I couldn’t get a good shot, but there was a sign I was able to sit on that put me about 8 feet up. I took a few shots, and then a group of maybe four or five Trump supporters (all wearing the easily identifiable red hats) tried to cross through the crowd to get to the other street. They were met with boos, and suddenly one of the protesters was beamed by what looked like a large bean bag.

The man was hit in the face and looked to see who had done it. Suddenly someone took a swing and there was an eruption of chaos. The riot police immediately engaged the crowd, spraying out mace and firing tear gas. 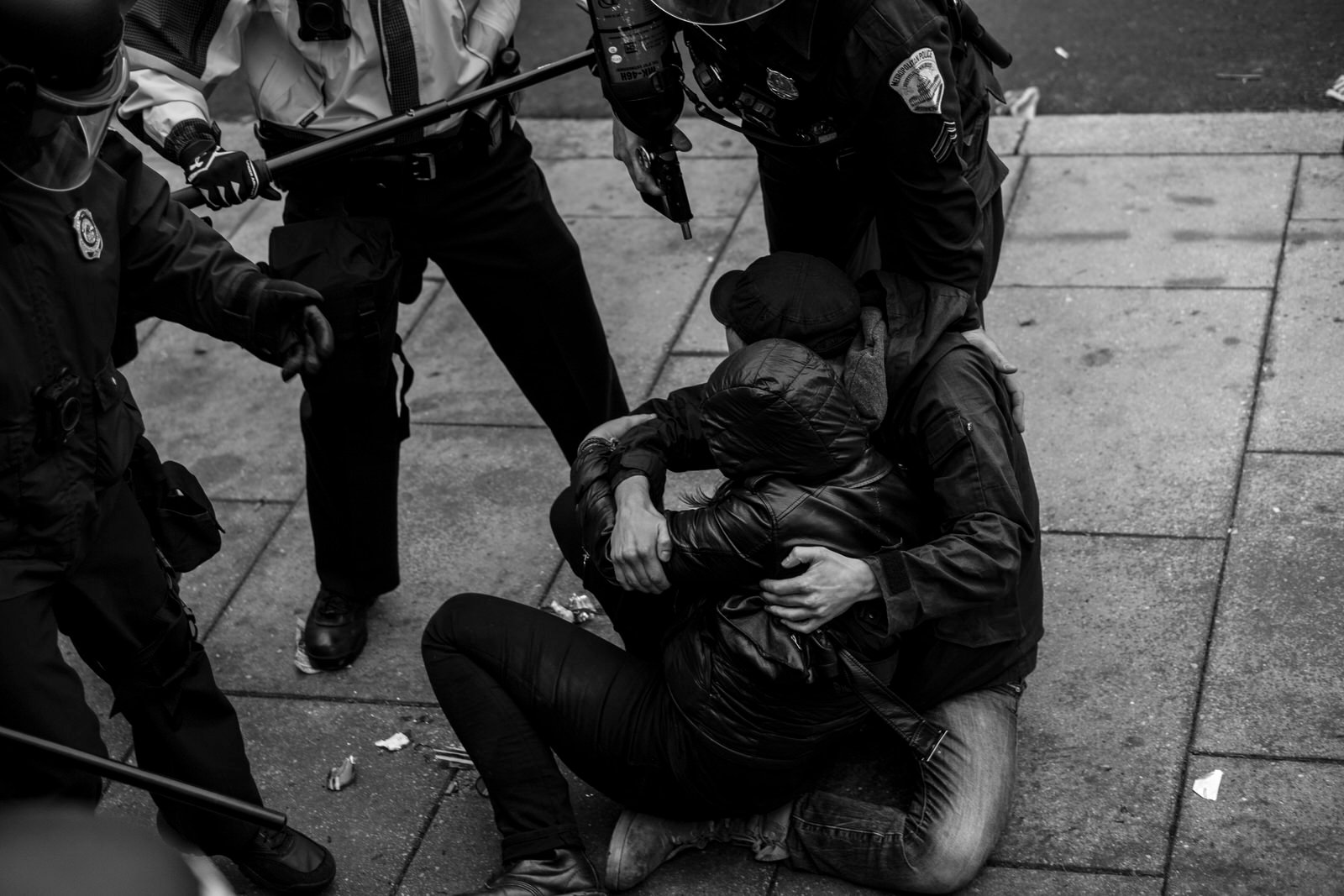 It wouldn’t be easy for me to get down, and everyone was running and fighting beneath me so I didn’t move — thinking the police probably saw I was just taking photos and wouldn’t pay too much attention to me.

They screamed “get down!” and I said “Okay, I’m coming down!” That statement was met with a large release of pepper spray directly into my eyes from about 2 to 3 feet away. I fell down to the ground hard, camera in hand. I angrily tried to stand and said “You c**ksuckers! I’m a photographer, not a protester!” before being slammed with a shield to the ground.

I heard protesters shouting “Save that guy! Someone save that guy!” and was grabbed and had someone holding my arm while I ran with him telling him I couldn’t see.

We stopped maybe fifty yards away and they tried to flush it out of my eyes. I was in immense pain, and just kept telling them I couldn’t see. People started running and the guy said the police were coming, and tried to get me out of there. I forced my eyes open for about ten seconds and ran as hard as I could before they wouldn’t stay open any longer.

I was moved to a bench and then an EMS team moved me to another area farther away shortly after. I couldn’t see for over an hour. The people — none of whom I could see — were all very nice. I remember that a Jen and a Katie stayed with me and offered water. A man named Jonah brought me some milk.

Here’s a selfie I took after finally being able to open my eyes. 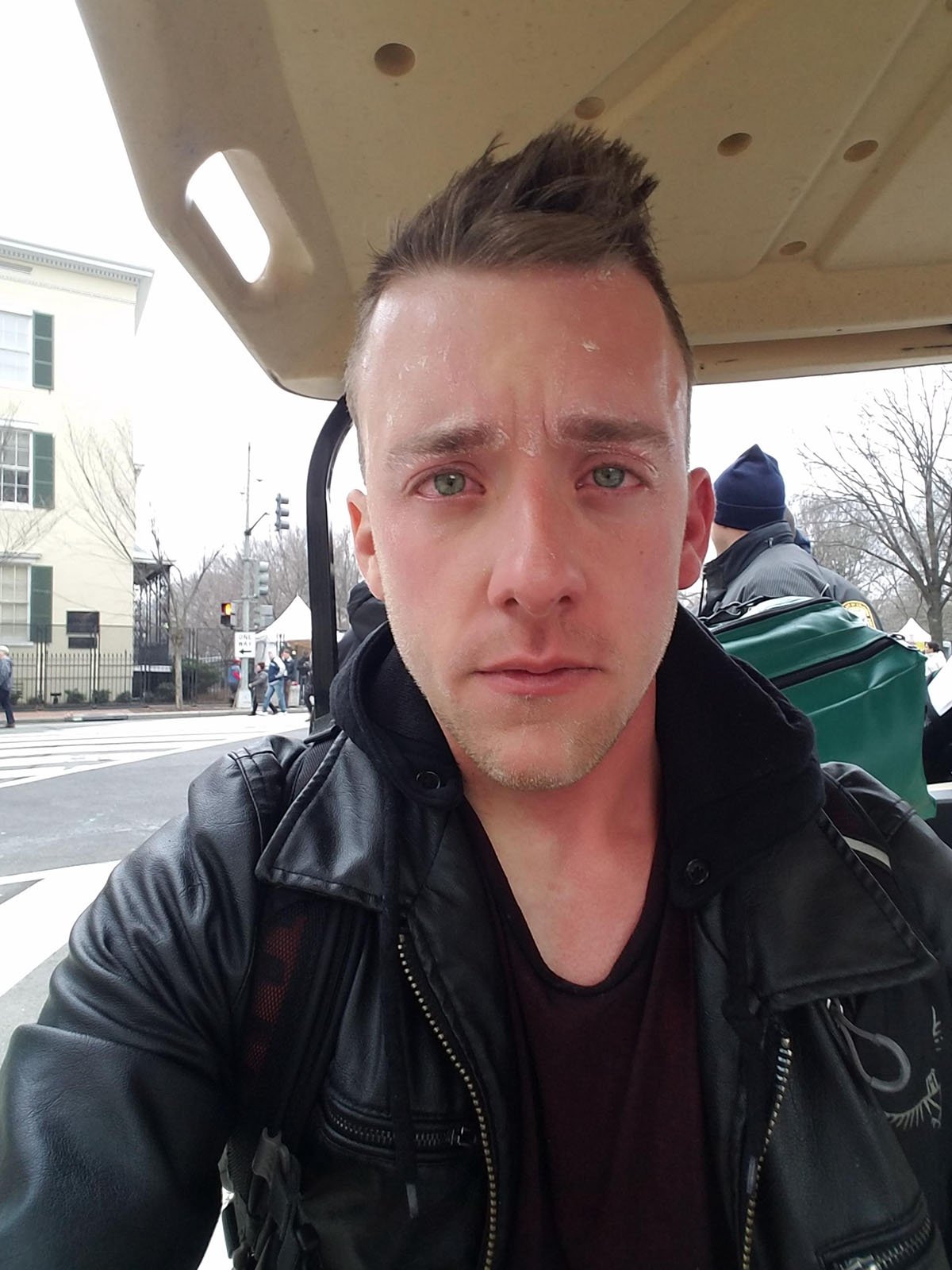 It was quite an experience. I think there are some things I could have done to maybe avoid that situation, but I also don’t think I should have been attacked quite the way I was. I try to be empathetic to all sides.

Ultimately, the photos were worth it, and I even got a short video when I accidentally hit record on my camera: 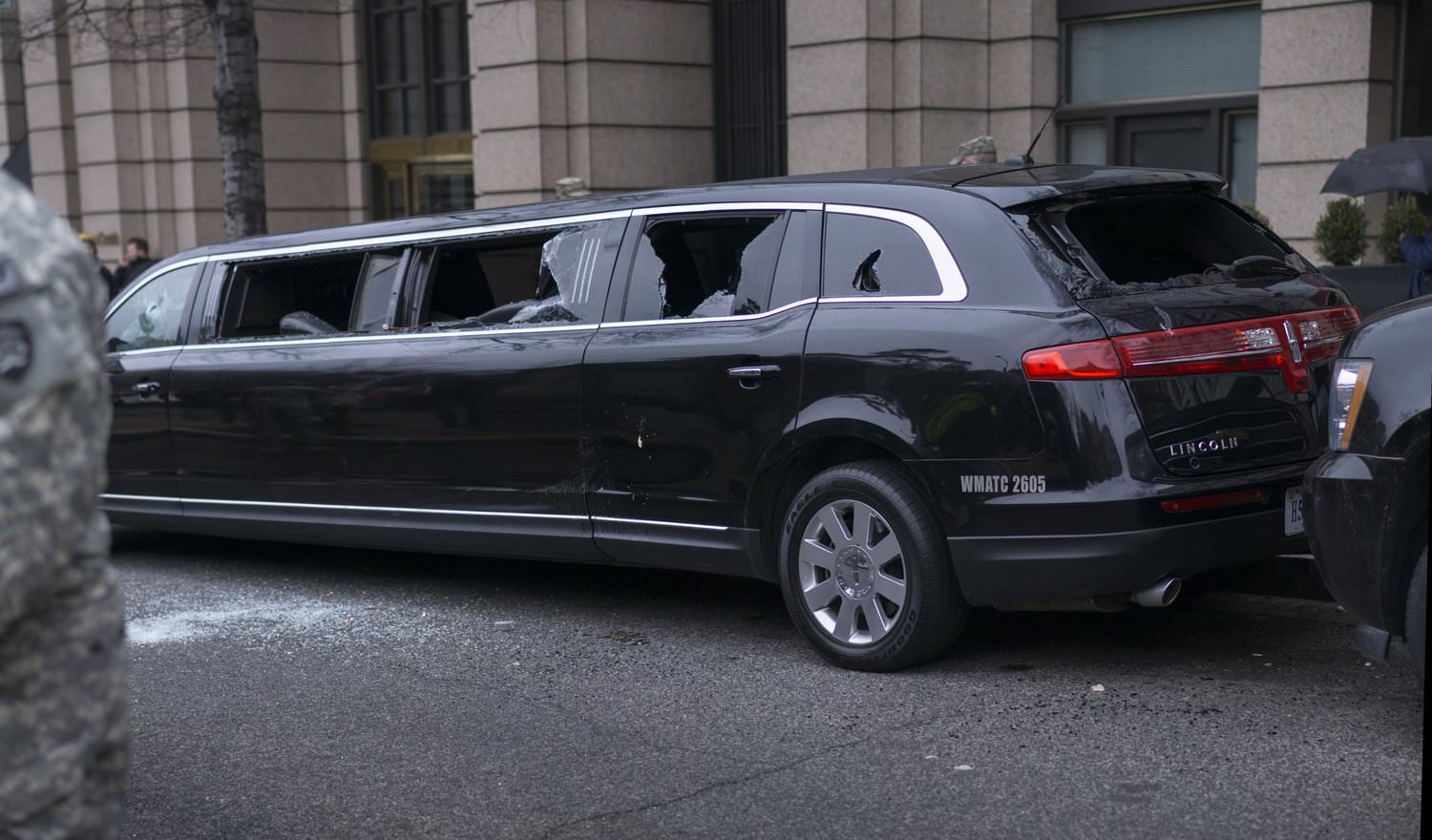 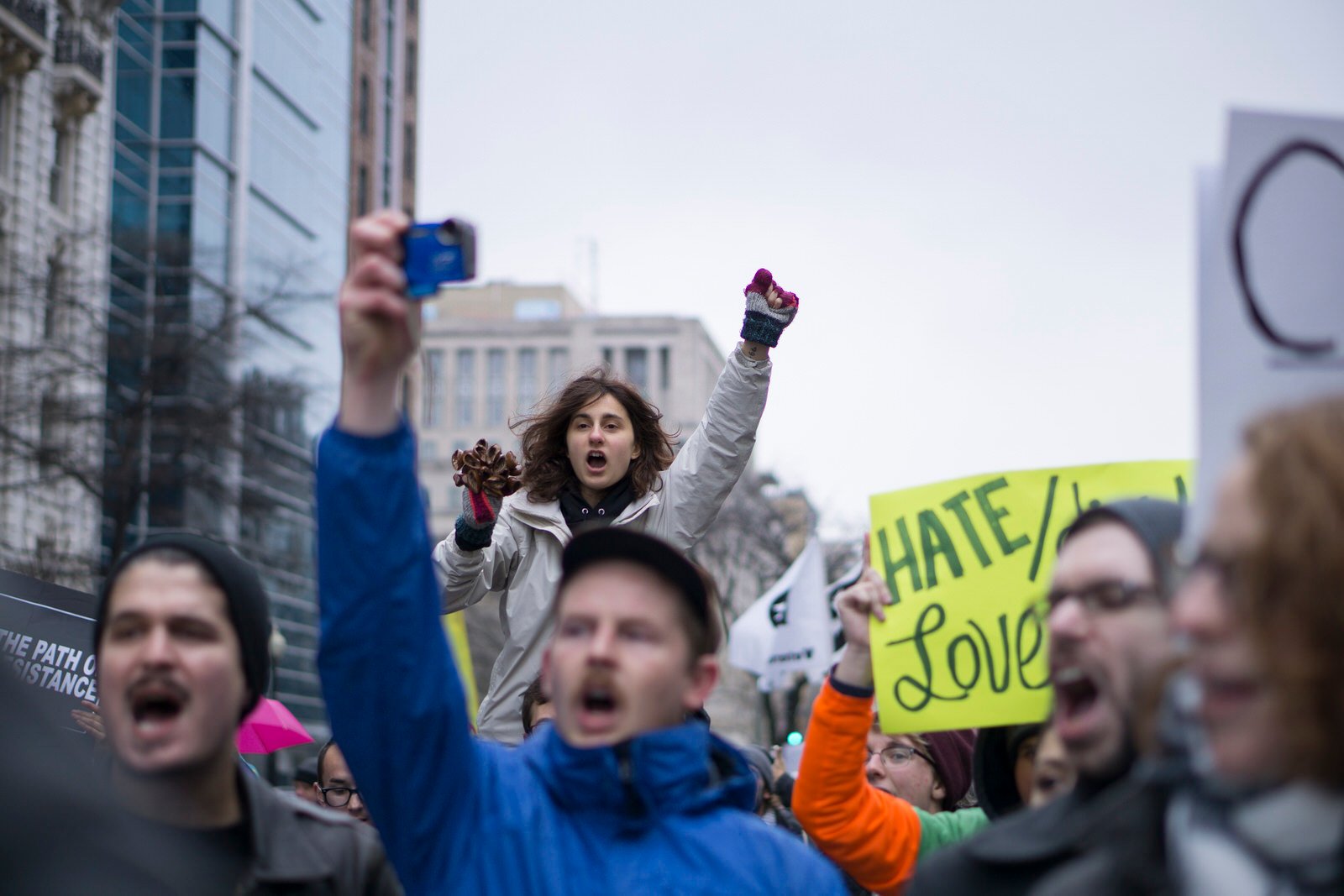 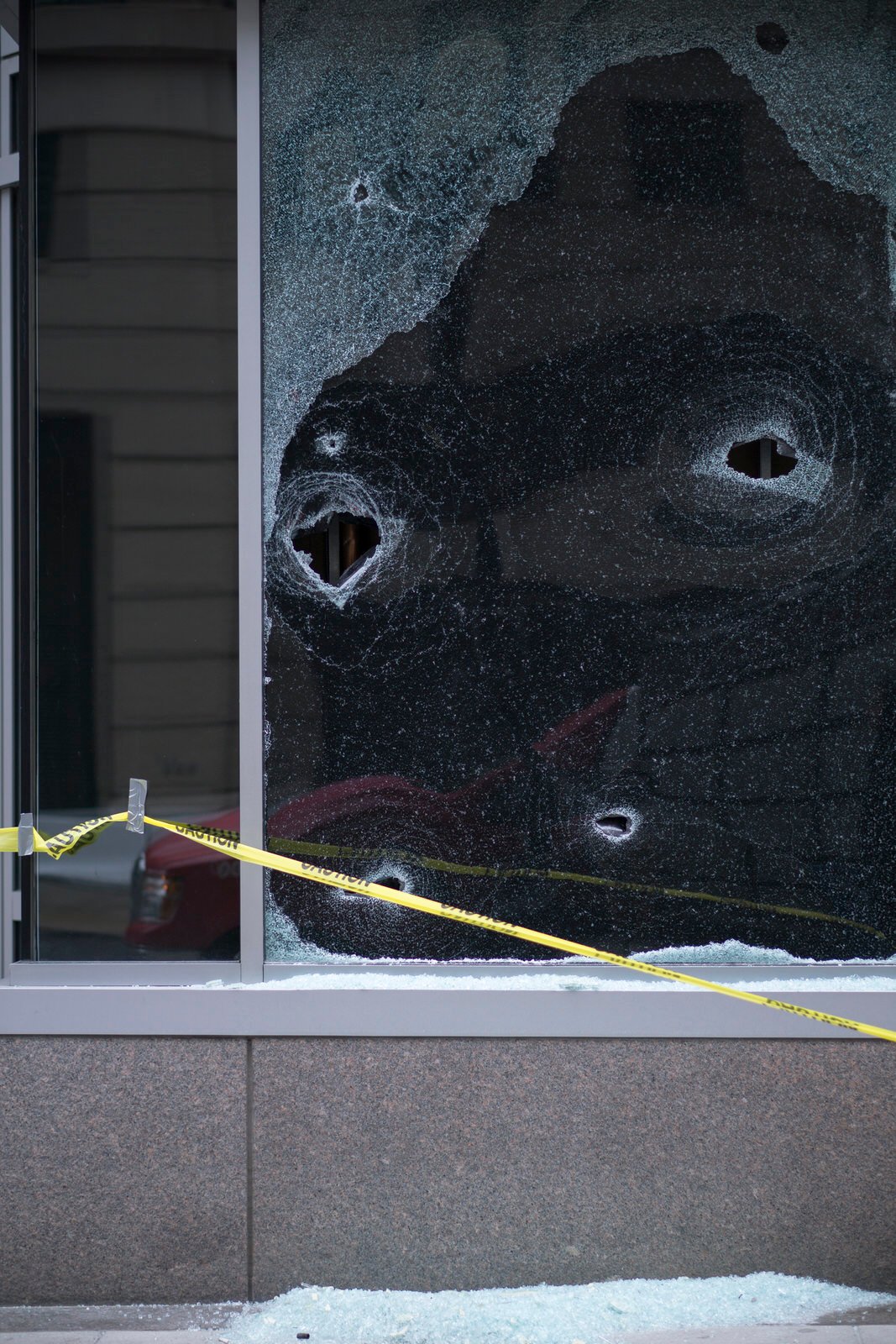 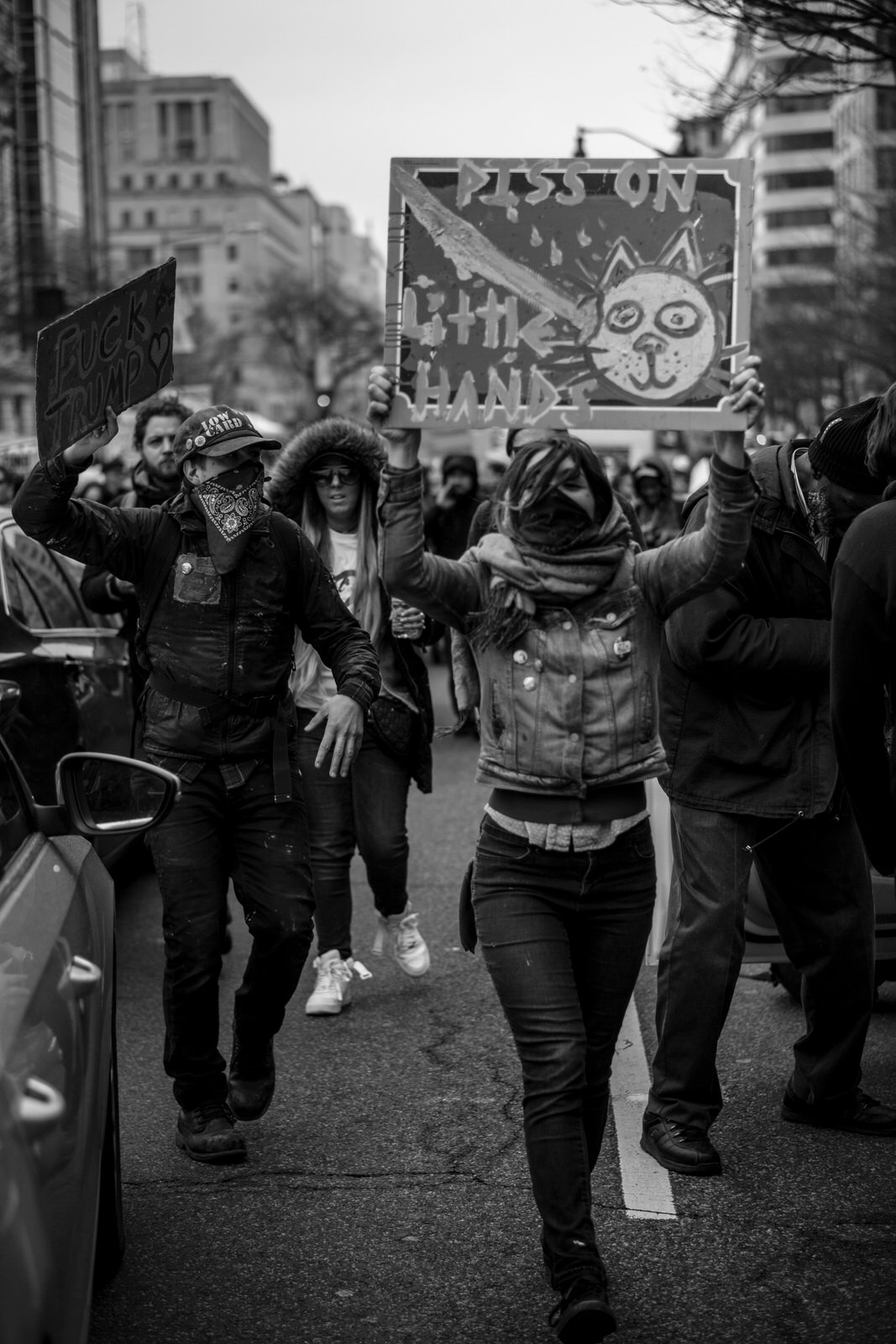 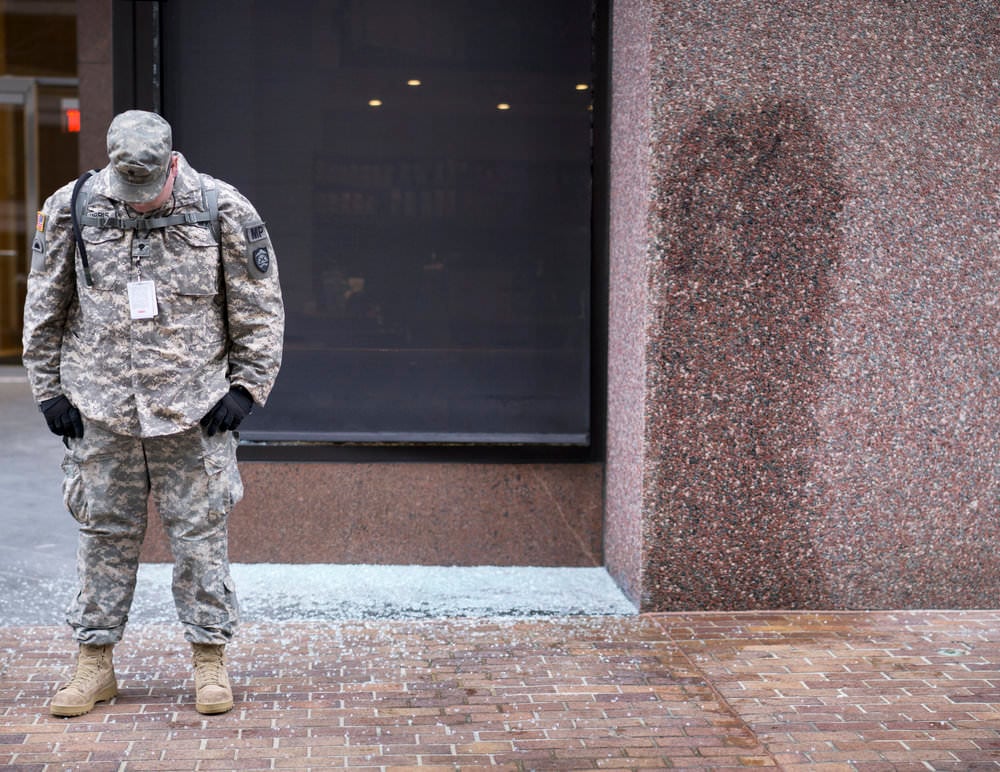 About the author: Taylor Mickal is a professional freelance photographer based in Washington, D.C. You can find more of his work on his website, Facebook, and Instagram.

Image credits: All photographs by Taylor Mickal and used with permission