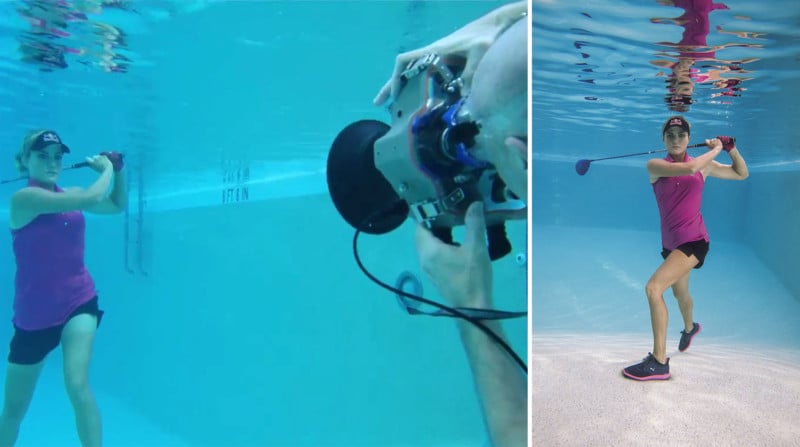 When Red Bull came to me with the idea for golfer Lexi Thompson to do an underwater boxing/golf shoot, I had to really think about how we were going to do this — I knew it was going to be challenging.

Since she’s a golfer, I assumed that Lexi wasn’t used to being underwater for extended amounts of time. And half the battle to getting good pictures is keeping your subject comfortable and motivated to get the photos… even without having to submerge yourself in water!

So I was lucky that Lexi was game to see this through because she was determined to pay tribute to the iconic Muhammad Ali and his LIFE mag underwater photos.

So here we go!

We got to the pool and set up the lighting. We used the Profoto B4 packs, which are battery operated. I did not want any electricity around the pool and using the battery lighting was very convenient (and the less cords the better).

I hung 2 strobe heads over the pool via two large boom arms. I had a reflector in the pool to bounce the lights onto Lexi. I had an underwater housing custom-built to hold my camera, and a cord running from the housing to the lights to set off the strobes. 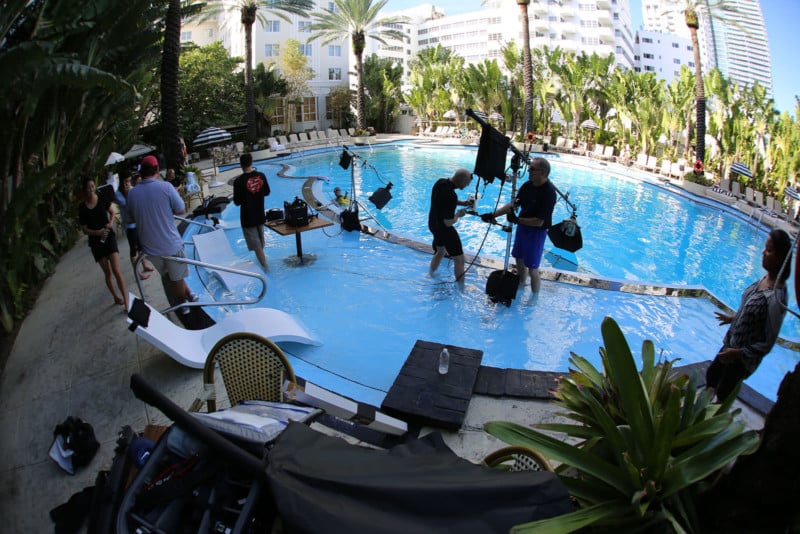 Everything was working and I was ready to go, except for one big problem: the pool had turned cloudy since when we scouted it previously. I could not see underwater past my outstretched hand. It looked like someone had dumped a bunch of milk in the pool. 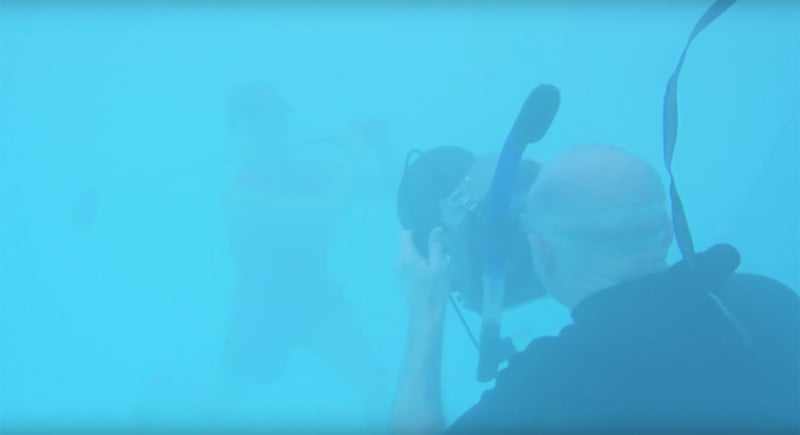 There was this moment of panic inside me because we couldn’t get the shots we needed for the project. I tried to shoot through it with Lexi but it was just not working.

This is when the teamwork of our crew becomes so crucial. One of the members of the video crew knew the general manager of the hotel next door. Their pool was crystal clear. He asked if we could use their pool and we got permission. We then broke down the whole set from the first pool and dragged everything across the street to the other hotel pool.

I was laughing to myself because the pool we rolled up to had hotel guests lounging on the pool deck and swimming on vacation.

In true Miami laid back style the guests took it in stride with our Red Bull army invading their pool and sat back and enjoyed the show. We reset the lights and got to work in the clean pool.

Besides the challenges of lighting the pool, I needed to make Lexi feel comfortable underwater. She is a professional golfer and they spend a lot
of time keeping their golf game out of the water. The key to posing underwater is to breathe deeply a few times and then exhale all of your air and submerge yourself. You can sink yourself easier that way. It takes some getting used to and Lexi did a great job.

I also needed the water to be as still as possible to keep her reflection showing clearly on the surface of the water, so I needed Lexi to sink slowly while keeping the water still. Some other challenges were that Lexi has long hair and I did not want her hair to float out of control. Her clothing had to be tight-fitting also so it would not float loosely underwater. Thank goodness for really good hair and wardrobe people who kept both of these aspects under control.

She was also wearing a visor and a pair of sneakers underwater. One of the last things we did was to try to get Lexi to address the ball underwater with her driver and look at me. At the same time I had the whole crew throw a bunch of golf balls around her and I needed to time the balls sinking in the water around her as she posed with the driver underwater. Easier said than done. We had a few misses at first. The crew threw the balls in too early.

Each time the crew threw the golf balls in the water they would roll down a hill into the 9 foot section of the pool. I had to swim down to gather all the balls to throw them in the water.

Some shots Lexi had her eyes closed — it’s not easy to open your eyes underwater for long periods of time, so timing was everything. There were also some shots where my lights did not fire. This was my fault as I was shooting too fast trying to time the balls sinking to the bottom around her.

Another challenge was Lexi had a hard time setting herself underwater at first. What came so natural to her on the golf course really took concentration under the water. She worked at it and eventually got herself into the right position.

Another challenge was that the pool was on an incline so the ball she was addressing kept rolling down hill and I think we eventually used a piece of tape to hold the ball in place. Slowly we got the timing right and we created what I think was the best image of the day. Lexi was looking right at me while addressing the ball and around her was a bunch of golf balls sinking to the floor. It worked out better than I thought!

The reflection was great. Her intent look and body positioning at the camera was perfect. Her bright pink Puma outfit really popped against the blue water. And the balls falling were a nice touch because the splash that followed the balls were unexpected for me as they reflected very nicely on the surface.

I think we were all pretty exhausted after the shoot was over but it was all worth it because we got what we set out to do.

About the author: Al Bello is a New York based photographer shooting events, portraits, picture story, and multimedia involving sports. You can find more of his work on his website, Twitter, and Instagram.