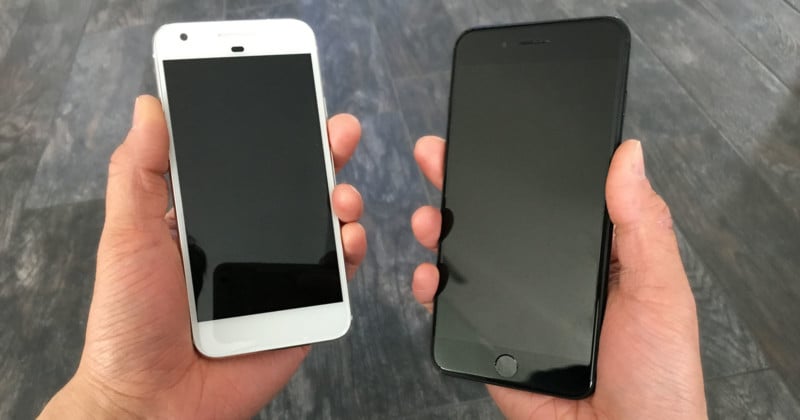 The smartphone camera landscape is getting crowded with high quality cameras these days, but the Google Pixel and Apple iPhone 7 Plus are two of the front runners when it comes to popularity and publicity. We did a simple shootout to pixel-peep at how the cameras in these two smartphones stack up against each other.

We shot the same photos with roughly the same framing in various places and in various lighting environments. HDR mode was set to “Auto” in both native camera apps.

For any of the following photos, click it to see the original resolution version (they can be found in this Flickr album).

Let’s start off with an outdoors scene showing trees and grass under sunlight.

Here’s a cropped section from the two photos:

We see that the Pixel has a noticeable advantage over the iPhone when it comes to resolution and sharpness (compare the blades of grass).

In this next playground scene, the Pixel photo has more detail, but the iPhone photo is more vibrant in its colors:

Here’s a cropped section from the two photos:

A photo of a flower with the background thrown out of focus:

The Pixel may produce sharper photos than the iPhone, but it’s not without flaws. In October 2016, Pixel owners began complaining of lens flare issues in their photos. As this next outdoor comparison shows, we experienced the same thing — a circular flare under certain conditions that isn’t present in the iPhone’s shots:

As you can see, the iPhone does have a spot of lens flare at the bottom of the frame, but it’s nothing compared to what shows up in the Pixel photo. And we didn’t intentionally try to capture the flare issue with the pixel — it showed up in casual snapshots due to the sun’s angle in relation to the Pixel.

Let’s move on to performance in low-light situations. Here’s a comparison of a baby nursery lit only by dim snowflake lights:

The Pixel seems to be able to capture more detail in the darkest areas of the frame, as this crop comparison shows:

Here’s a bookshelf of children’s books in the same low-light environment, with flash turned off on both cameras:

As this crop comparison shows, the iPhone seems to have produced a cleaner and sharper result — we were shooting multiple photos handheld and selected the best shot for each:

Here’s the same scene, except with the rear flash enabled for both phones:

And the crop comparison:

Both the Google Pixel and the Apple iPhone 7 Plus are solid options if you’d like to make your smartphone your everyday camera.

The iPhone 7 Plus offers a dual camera with 2x zoom and a special Portrait mode with faux depth of field. In low-light environments, the iPhone seems to stack up well against (or even beat) the Pixel in terms of details, colors, and flash power.

But in daylight and other well-lit situations, the Google Pixel does seem to offer sharper photos and better image quality… as long as you can avoid the dreaded sun flares.