We’ve seen our fair share of strange, voyeuristic, and sometimes ethically questionable photo and video projects, but this one tops the list. After having his phone stolen, film student Anthony van der Meer hatched a plan: he had another phone stolen on purpose, and then followed the thief around for weeks using a hidden app.

The short film van der Meer created is called “Find my Phone,” and it documents the entire process from his (unsuccessful) attempts to have the phone stolen on-camera, to the tracking and listening in on the thief for several weeks after.

“What kind of person steals a phone? And where do stolen phones eventually end up?,” asks van der Meer in the video’s description. “‘Find My Phone’ follows a stolen phone’s second life by using spyware.” 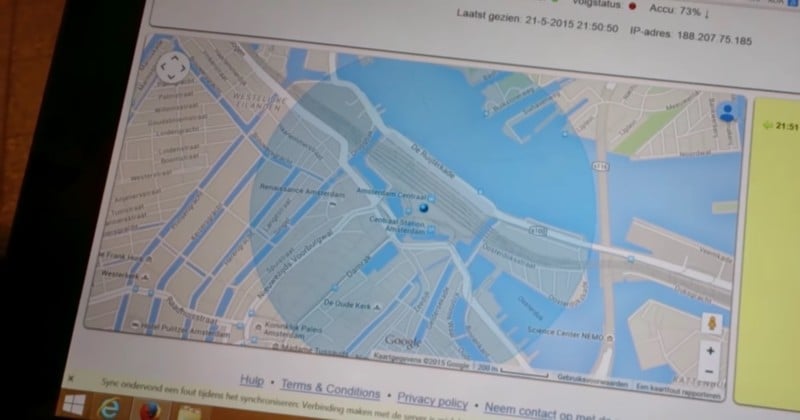 The spyware van der Meer mentions is an anti-theft app called Cerberus, which he installed in such a way that it is impossible to remove, even if the thief wiped the phone. Using this app, van der Meer was able to log onto his phone and use it remotely any time it was on and connected to the Internet—he took pictures, he recorded audio, he even recorded video, and then compiled all of this into the short documentary above that is equal parts creepy and captivating.

And we do mean captivating. Since the film was shared on Reddit it has garnered 51K upvotes and it has amassed over 600K views on YouTube in just 3 days—it is currently the number 12 trending video on all of YouTube. As one Reddit commenter put it, “I could’ve watched for an hour longer.” The unorthodox short doc offers viewers a deep psychological dive, even if van der Meer never truly answered his own questions.

“Although you’ll meet the person behind the theft up close and personal, the question remains,” he writes. “How well can you actually get to know someone when you base yourself on the information retrieved from their phone?”