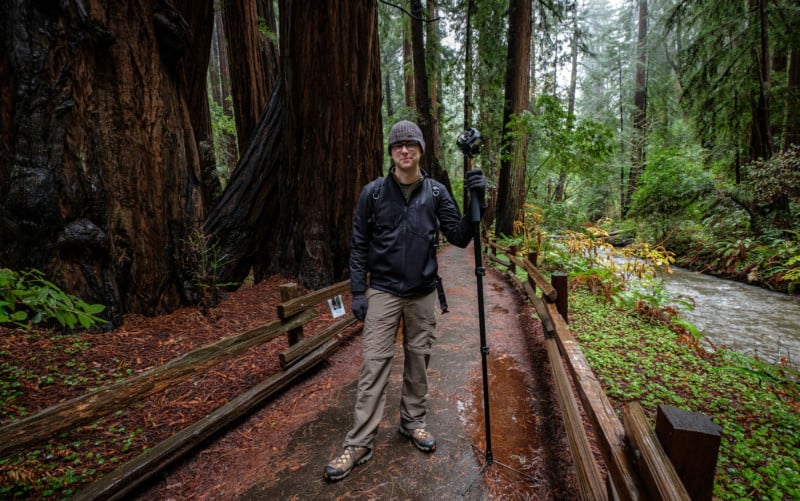 It’s not every day you get to experiment with new forms of media. We have seen astonishing new ways to move the camera from drones to gimbals which can push the boundaries of photography and videography.

We have seen the rise of in-depth podcasts from companies like Gimlet Media change the radio game. And news as a whole has seen drastic changes in distribution from social networks to digital subscriptions. But with 360 video, we had to invent the techniques and write the book ourselves—all while in the middle of trying to produce quality content.

It started for me when The Weather Channel asked me to shoot some 360 content during my trips to Iceland and Norway this February. I quickly got in touch with some colleagues and arranged for a guide to take myself and a climate scientist into a glacier to show our audiences what work is being done to study Earth’s changing climate.

Explore Iceland’s changing climate from the inside of a glacier. (Video by Steve Johnson)

A lot went wrong—from breaking a rig the day before a shoot to freezing cameras to overheating cameras, and to figuring out how to avoid stitching errors with people on camera in 360.

But we figured out a lot in these early months of 360 production, and I’ve been fortunate enough to do a lot of shoots, lectures and workshops to share what to do and what to avoid. 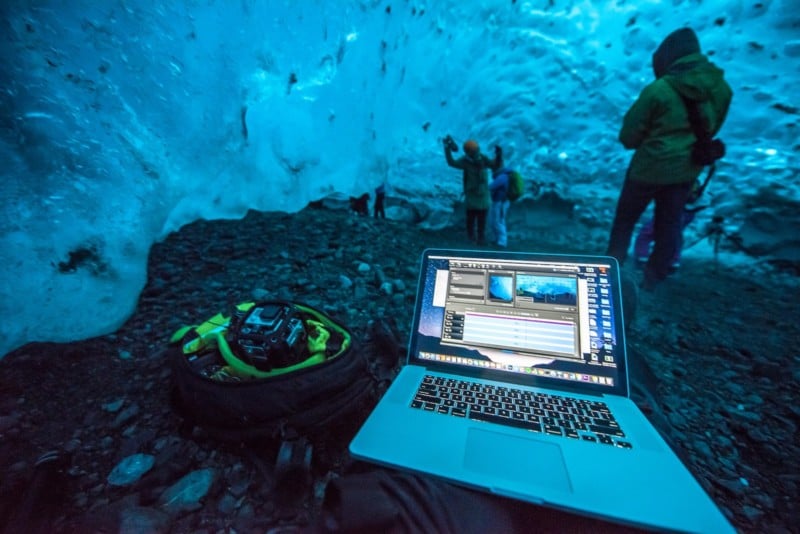 I brought along my MacBook Pro and stitching software to test the first 360 interview inside of a glacier in Iceland. (Photo by Steve Johnson)

The first 360 time lapse of the Northern Lights for The Weather Channel. (Video by Steve Johnson)

In 2016, we went from experimenting with janky 3D-printed molds for GoPros to fully functional camera systems capable of spherical audio and video recording that can fit in a backpack.

Fortunately for those reading this, we have made a ton of mistakes and learned a lot from picking up the pieces (sometimes literally). Let’s get this part out of the way; it’s almost always the first question asked and in my opinion the least important.

360 video gear has come a long way in a year. Right now the GoPro Omni (six-camera rig) is the most user-friendly professional rig out there with enough control over your settings to shoot in complex scenes but simple enough to run and gun. And at $5,000 for the rig, software, external power and a case, it is a pretty good buy for those wanting to offer 360 video professionally.

My recommendation for everyday shooters and those looking to start shooting 360 video is the Nikon KeyMission360. At $500 it won’t break the bank and it stitches your video in camera. Oh, and being water proof, shock proof and freeze proof doesn’t hurt considering the pain I’ve put cameras through this year alone. 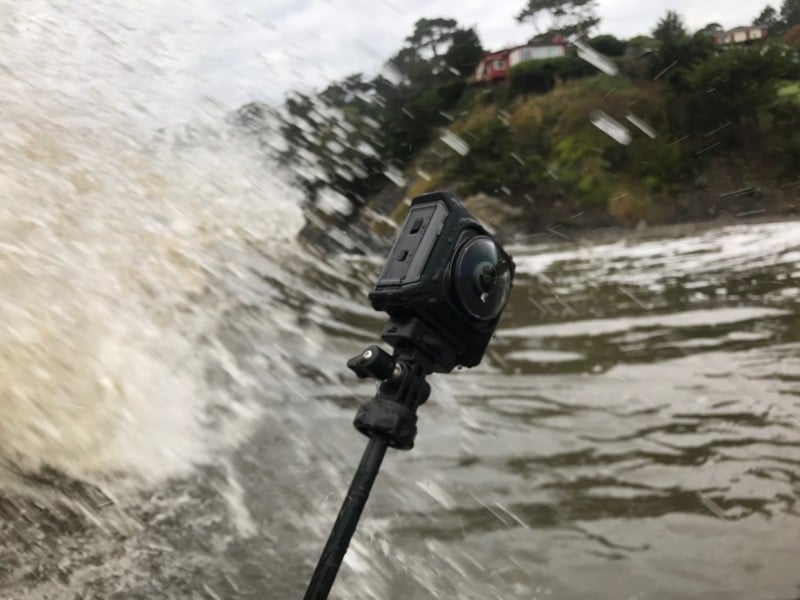 Nikon KeyMission 360 getting pounded by a wave at Muir Beach, California. (Photo by Steve Johnson)

There are other great products out there from RICHOH, Samsung, 360 Fly and others. But after using almost every consumer 360 camera in the field, I’d stick with the Omni and KeyMission360 in my bag every day.

The most difficult part of making 360 video work is a narrative. Cool toys and new technology are always a reason to get outside and experiment, but once we figure out how to use these tools we need to apply them. In most cases, news organizations and publishers used them to bring people to a play.

I did this early on too. I brought people along with me airboat riding in the Everglades and to Norway to check out the Northern Lights.

After a scene or two, our audiences want to feel more—not just see more.

Building an immersive narrative has been the most challenging aspect of my career. I’ve partnered with some brilliant storytellers at The Washington Post, various colleges of journalism across the country and fellow visual storytellers to try and make sense out of immersive storytelling.

Google News Fund and the Knight Foundation have brought many of these lessons together in an ambitious effort to fund the development of immersive news called Journalism 360.

Building a narrative is much more difficult than what we normally work on with traditional stories. Not because 360 is any better, but because we don’t have a strong library of examples to learn from.

You always have to ask yourself why when deciding to use 360 video. Why does my audience need to be here? Will it help them understand the story better in 360 or just confuse them?

A Washington Post feature in 360 on the Palo Duro Canyon in Texas. (Video by Steve Johnson)

There is something great about being able to control a camera’s focal length and perspective to tell a story, and 360 video removes that control. However, what it adds can potentially engage your audience on an emotional level in a way that we’ve never been able to produce before.

So, in building your narrative, use tools like scripted voiceovers and audio interviews to guide your audience through a scene. Gentle nudges like, “as you walk through the X,” or “when you look up you can see Y,” gives a direct cue to your audience that they are in control. Words like “you” in the scripts directly address the audience as a participant in the story, and not just as a passive viewer.

This voice has improved drastically with experience. Even in my earlier pieces from Iceland to the later work in Palo Duro Canyon you can hear a difference in the style of the voice talking with the audience instead of talking to the audience.

Join me and The Washington Post as we dig up dinosaurs at the Wyoming Dinosaur Center. (Video by Steve Johnson)

You must also slow everything down. Really slow. Your audience has to orient themselves with every scene to which you cut. A normal 2-3 minute traditional video may have 20–30 scenes, while a 360 video of the same length might have 6-8 scenes. Using a voiceover and scenes that have motion/action inside of them will work much better for a 360 narrative instead of cutting really fast and losing your audience.

We will continue to develop better narratives as more content is produced and we’re seeing 360 being done well in many news outlets and magazines. We still have a ways to go to get over the cool factor of 360 and make it a purposeful and useful storytelling tool.

The logistics of shooting 360 video are actually quite simple. Most 360 cameras are pretty much on auto mode—with the only controls being a few bumps in exposure either direction. The more complicated GoPro Omni allows you to use some of their ProTune settings, but for the most part, shooting 360 video is a one-button operation.

While it may be easy to shoot 360 video, it’s where you’re placing the camera, factoring in light, stitching and what the user will see relative to the placement of the scene that makes all the difference. All of this is important as you start to build an immersive story. 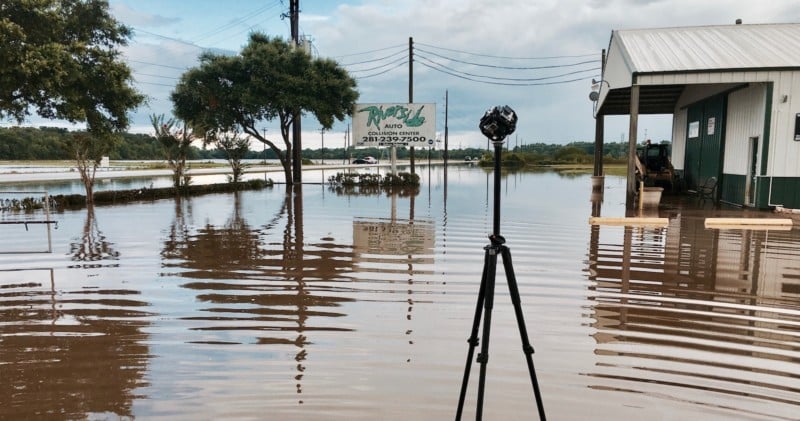 Shooting 360 video in Rosenberg, Texas for The Weather Channel. (Photo by Steve Johnson)

Let’s break that down:

Lighting a scene in 360 is near impossible without seeing the lights—so natural light is your only option for run and gun. You have to determine what each lens of the 360 camera will see and if the light is dramatic enough to notice when stitching.

For example, if you’re shooting with a two-camera Nikon or RICOH and one lens is pointed directly at the sun and the other in shadow, your exposures will be so different that you’ll be able to see the stitch line between each camera. This is less of a problem for rigs with more than two cameras but still a factor to consider when shooting.

Stitching errors will continue to haunt us 360 shooters until we have an affordable stitch-free camera that has no blind spots or minimum distances from the camera. More expensive ($60,000) 360 cameras like the Nokia OZO don’t have this issue, but are bulky and not conducive for what most photographers are used to shooting with.

Stitching each camera’s video together may be a thing of the past with more advanced cameras like the Nikon KeyMission360, but you still have to be cognizant of the “lines” between each lens to make sure you don’t end up looking like a Picasso painting. 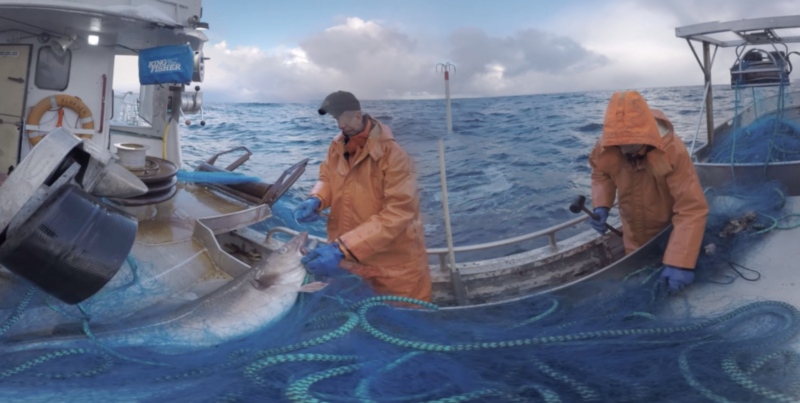 A stitching error while filming on a fishing boat in Fredvang, Norway. (Steve Johnson)

Where you place the camera is also critical to a successful scene. Like the days of shooting film, you cannot monitor what you’re shooting live. You have to train your eye to think wide in every direction and make sure there is a strong focal point to grab someone’s attention in a specific direction and trust that you shot it correctly.

As you shoot with a 360 camera, you’ll develop an idea ahead of time of how close an object should be without it becoming a problem to stitch and even if it works in a 360 scene. 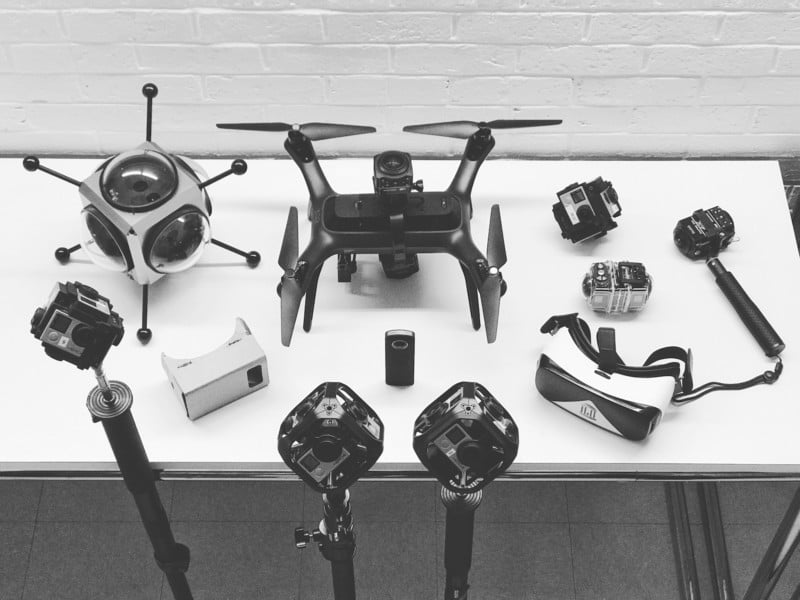 The many shapes and sizes of 360 video production. (Photo by Steve Johnson)

The possibilities as photographers to use 360 in a way to experience compelling stories and bring people to amazing places is what gets me out of bed. We have a tool that is untested, unproven and ready to experiment with. In 2016, we’ve only begun to see how we can use immersive content to share stories with millions of people.

As VR headsets become more popular, as social networks roll out more immersive features, and as smartphones become more VR friendly, photographers are going to be leading the charge in immersive content.

It’s the trained eye that knows where to find that great light, in every direction, to create a compelling scene. It’s the sense of place that we can frame so well that allows our audience to join in too. And it’s our ability of reaching those places inaccessible by most in order to share a story.

About the author: Steve Johnson is the founder of Boundless, a visual storytelling company based in Washington, D.C. You can follow his work on Twitter, Instagram, and Facebook, read more how-to articles on Medium, and see more stories produced at www.seeboundless.com/stories.