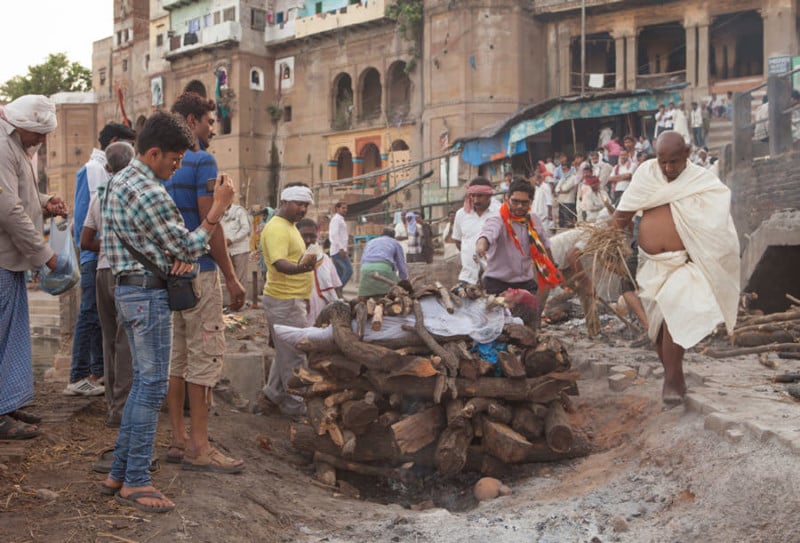 Indra Kumar Jha is a 26-year-old death photographer. He works 16 hours a day in Varanasi, on the banks of the Ganges, the sacred river for Hindus, where an average of 300 bodies are burned every day.

The bodies come from all over India, often tied with a rope over cars and auto rickshaws. During the cremation ceremony he goes to the families to take photos of their beloved deceased, then he runs to print the images in a little photo lab. The pictures are serve as a memory for the family, but they’re also used to prove to the bank that the family member is dead.

What’s surprising is the consistency of the body of his work. It takes a professional photographer years of experience, exhibitions and analysis to reach such precision. Indra achieved that because of necessity and without any artistic ambition or project concept — a sort of unconscious wisdom.

When Indra was 17, he bought a small camera and began to shoot, without any previous photography education.

I started photographing Indra during his work and I asked him to share his archive of images to develop a project together about his incredible work. Indra accepted. Indra likes this job because he has no manager and he can earn between 1,500 and 2,500 rupees (~$24-$40) per day.

The price of each picture depends on the size: between 120 and 200 rupees ($2-$3). The proposed project is made up of a selection of a few shots that I took to Indra and a few images from his SD card. In the final pages, there are stills of the main objects used during the Hindu rituals in the crematorium, each of which tells a little more about the person portrayed.

Here are some death portraits captured by Indra: 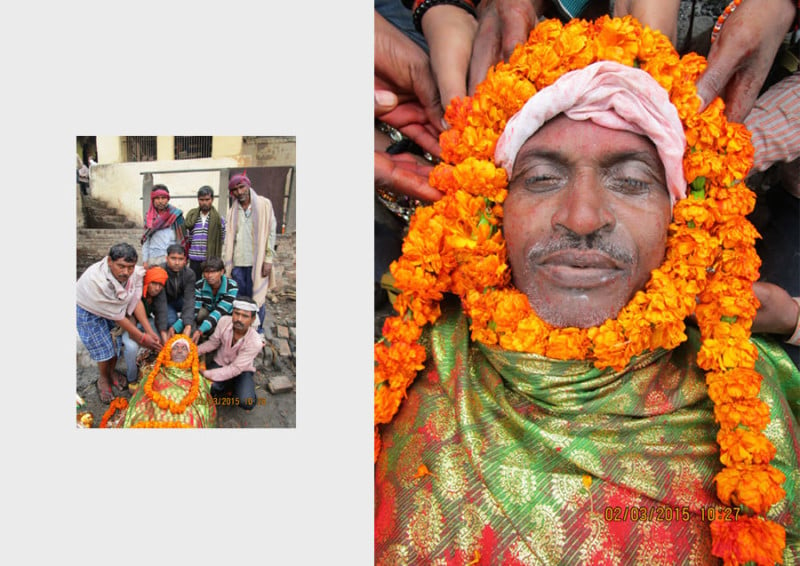 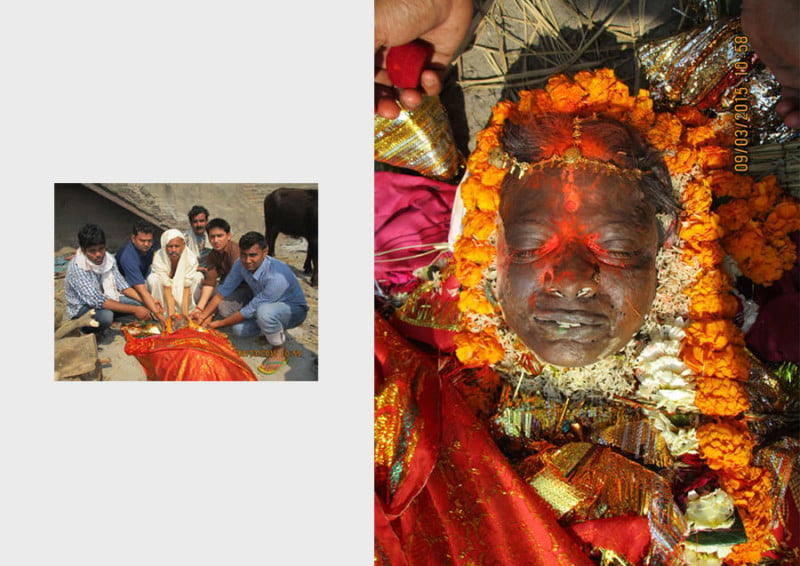 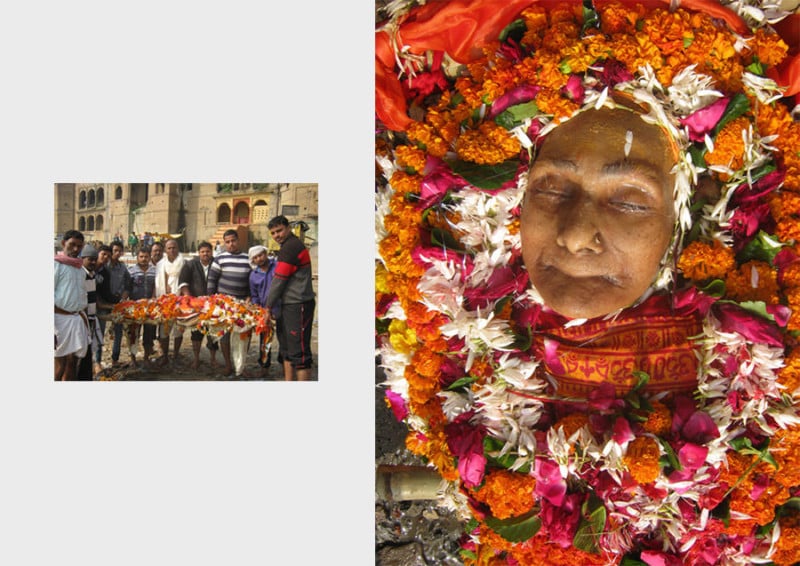 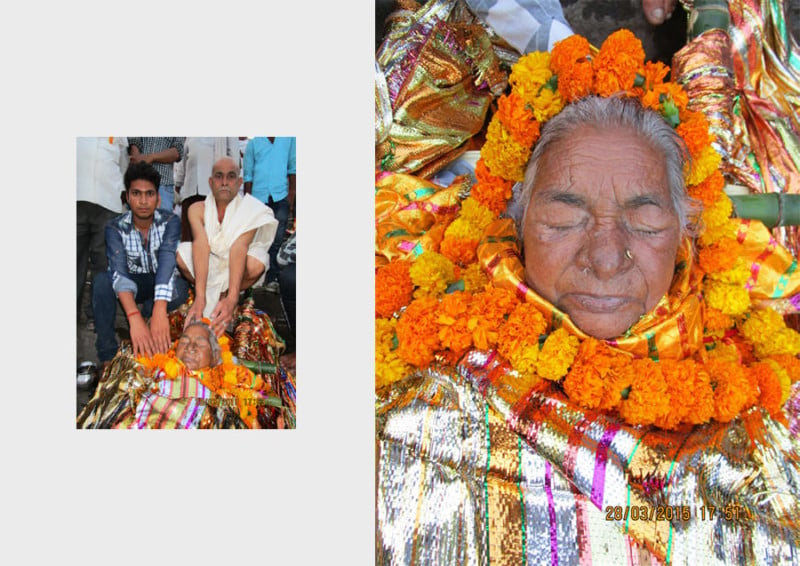 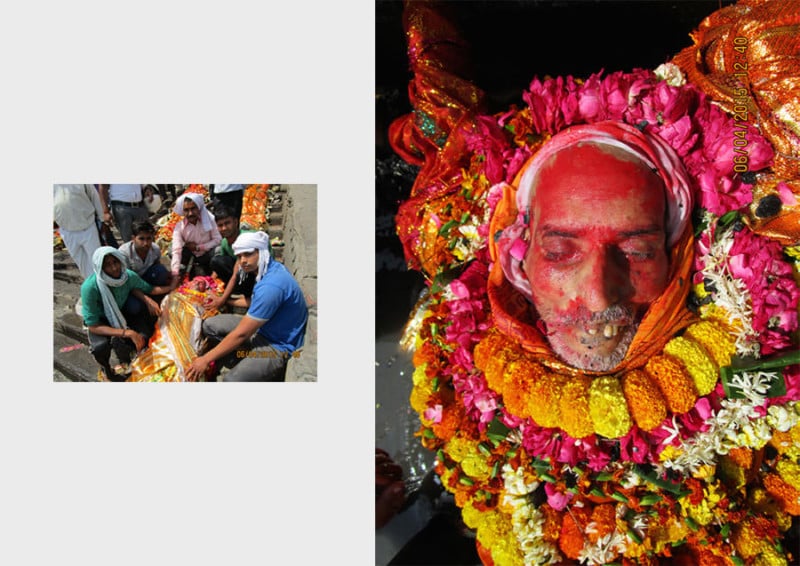 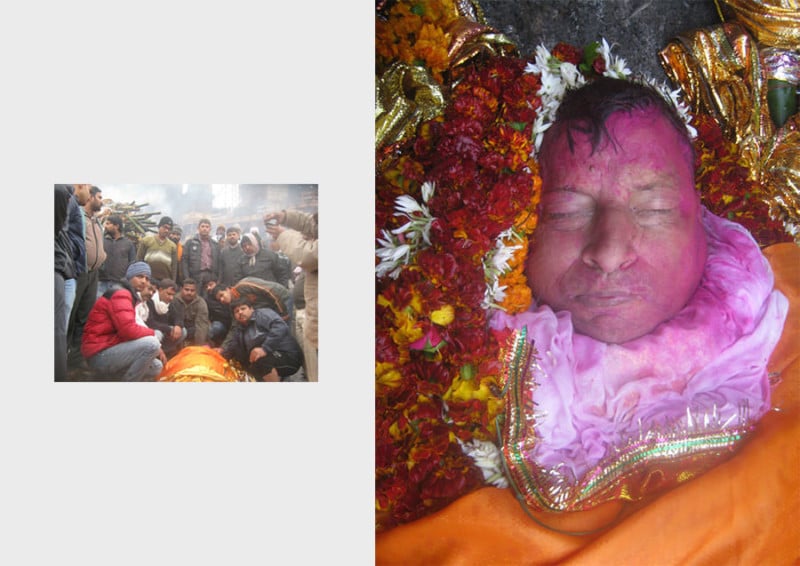 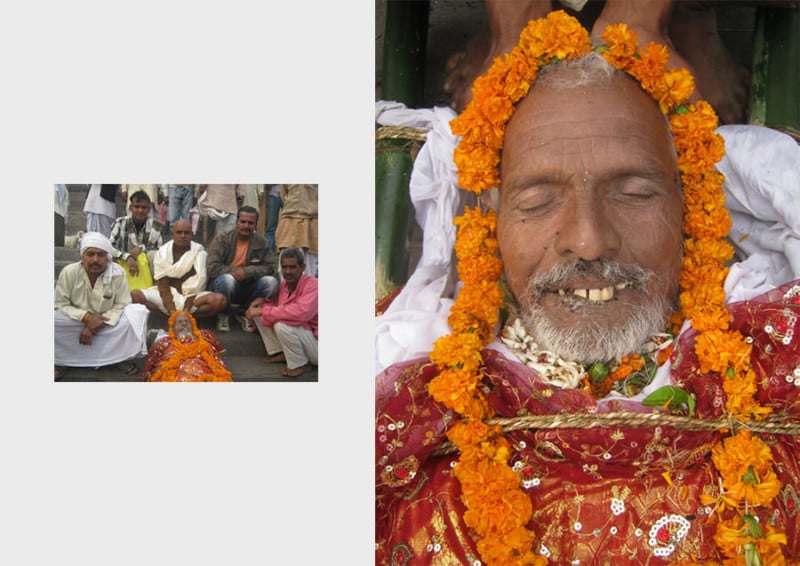 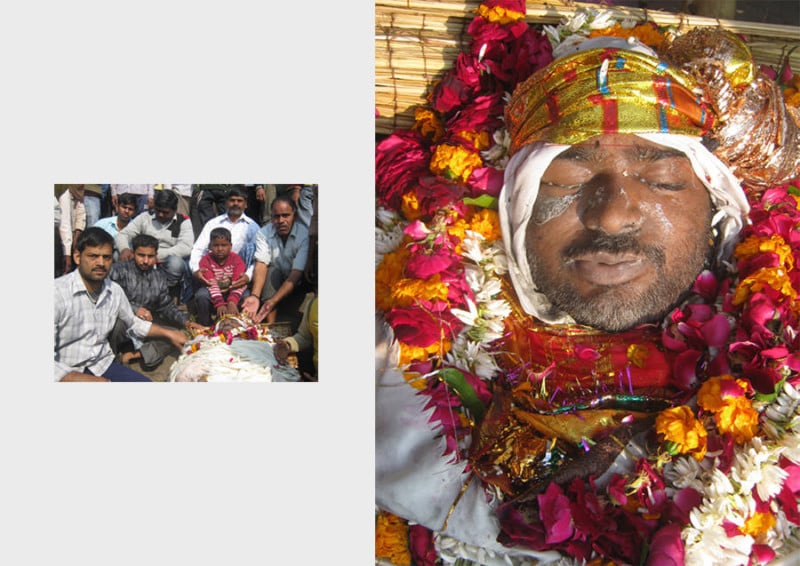 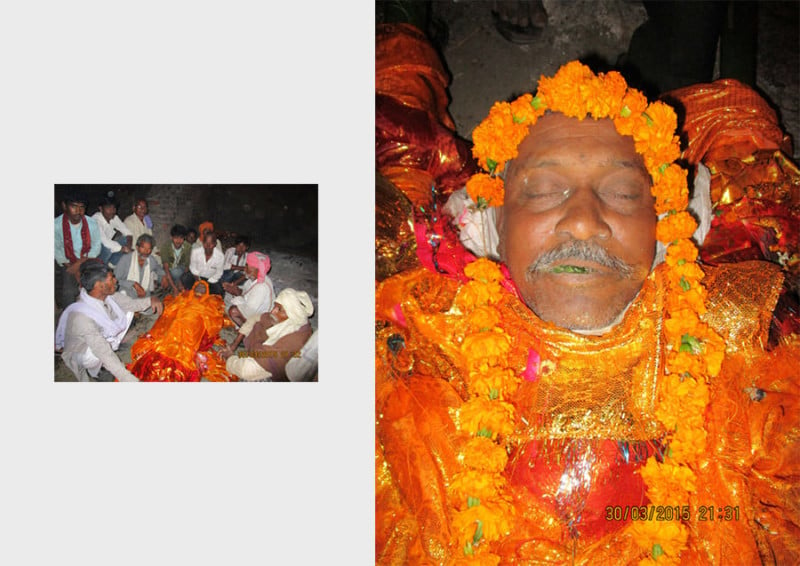 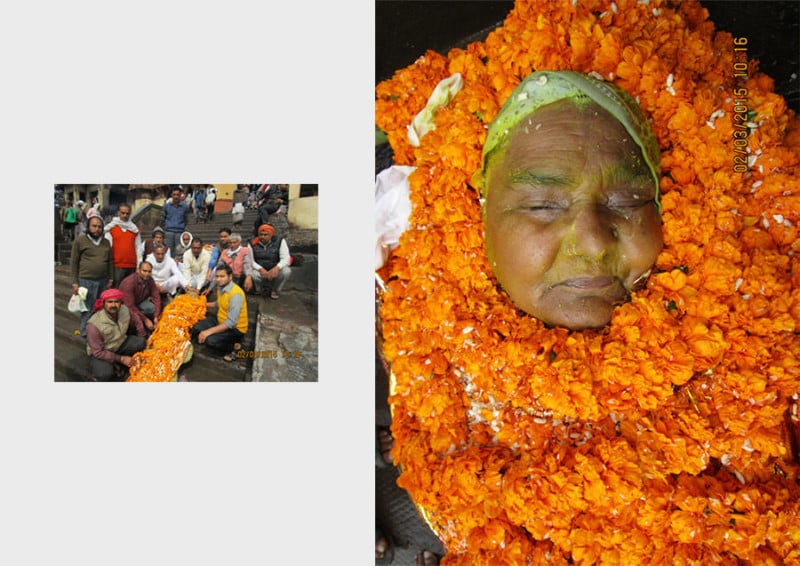 Marigold, orange flowers, belong to the poor caste and keep insects away and they are offered to God as a symbol of yield. White flowers are called “Lily” and they symbolize humility and devotion. Roses are the most expensive and they are for rich people. “Ghee”, or clarified butter, it is spread on the body before the cremation and ensures the continuity of life. The wood is expensive, especially sandalwood, which is generally used only for important people. There’s an earthenware container for the water of the Ganges, which is poured on the mouth and on the forehead of the deceased before breaking the vase on the ground. Each family has the task of giving a “Kafan” to cover the body. Not all the people are cremated, because their souls have already been released from the cycle of reincarnation. To these a stone is tied to the feet and they’re let go in the bottom of the river. These are the children, the pregnant women and sacred animals such as snakes and cows. 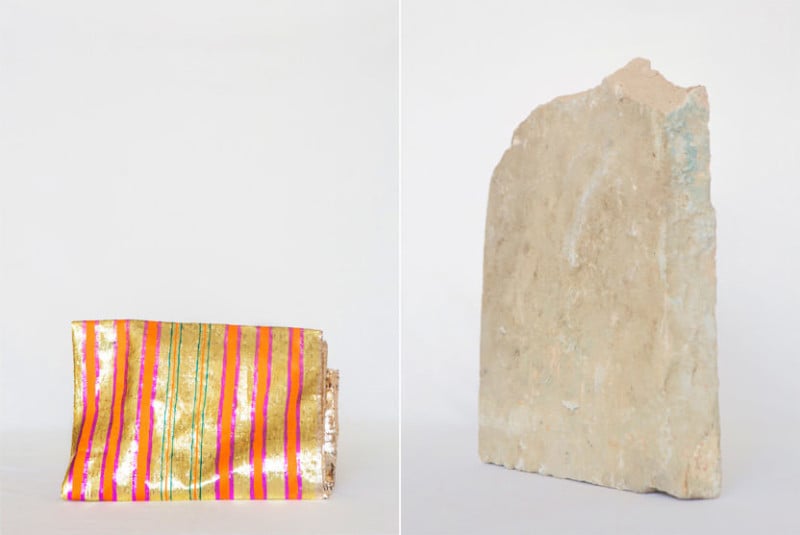 About the author: Matteo de Mayda is a photographer who focuses on projects done for good causes. Born in Treviso, he currently lives in Treviso and Venice, Italy. His work has been published in top publications ranging from National Geographic to Rolling Stone Magazine. You can find more of his work on his website, Tumblr, and Instagram.