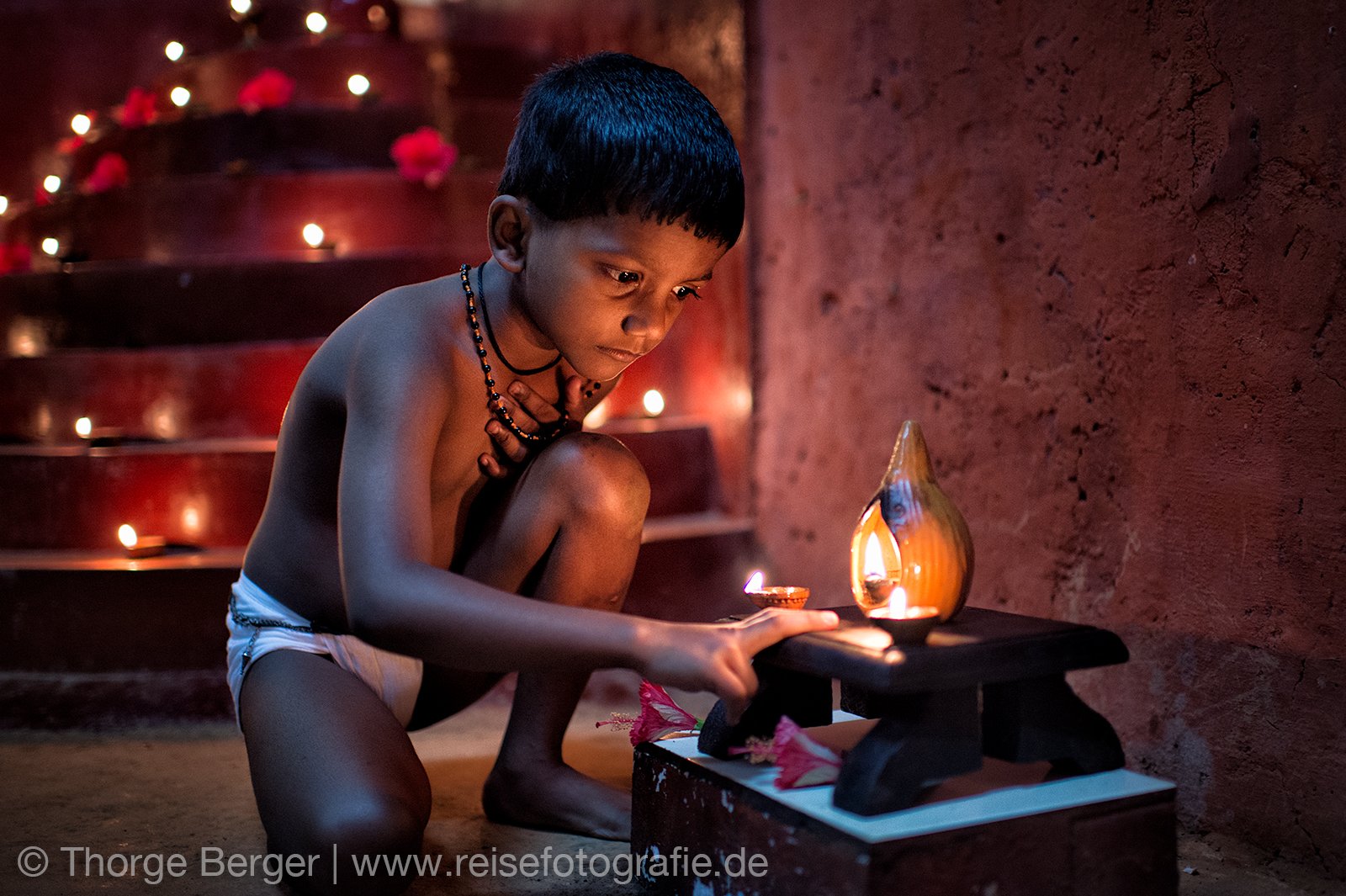 From the beginning of my photography career—which is … almost 30 years ago (that can’t be true!)—I’ve been shooting with zoom lenses. Due to the flexibility they offer, I was convinced they make the best choice; as far as I know, thousands of other travel photographers who would say the same.

I personally started with the classic 18-200mm zoom lens, sometimes referred to as “the travel zoom.” But after some time, I moved to a heavier solution, the 24-70mm f/2.8 and the 70-200mm f/2.8, because I wanted faster glass and the option to compose with a thinner depth of field. Then, at some point, I started to travel with 2 bodies (currently Nikon D4s and Nikon D500 or D3s as second body). 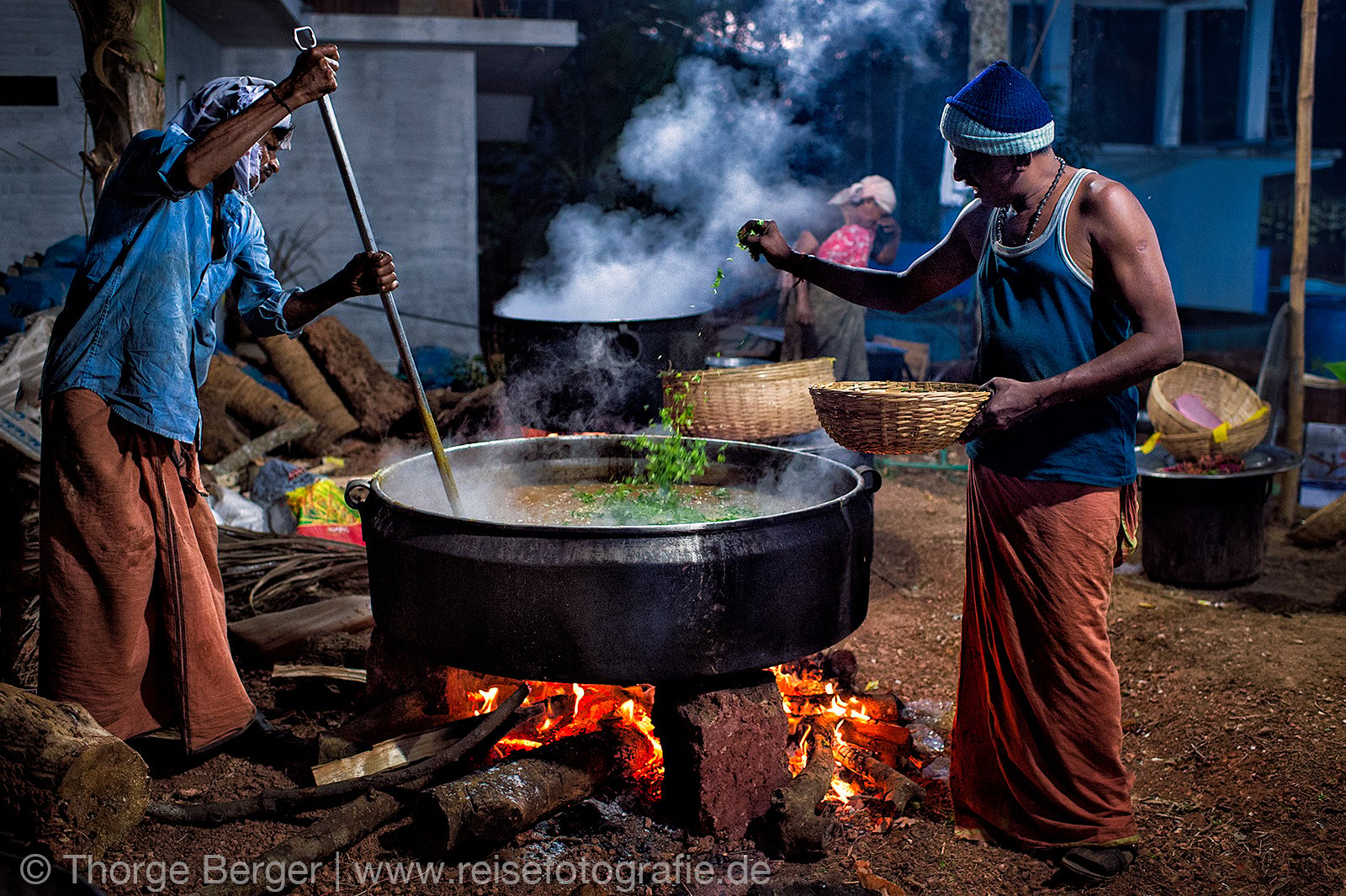 By now I’ve traveled to roughly 50 countries in 5 continents and shot literally tens of thousands of photos with these lenses. Sometimes I would add a wide-angle zoom lens or some other prime to my bag, mainly for portrait shooting, but still, there was never a doubt that the 24-70mm and the 70-200m would remain my main lenses.

In 2012, I was leading a photo tour in Bhutan and one of the participating photographers had really bad luck: right in the beginning of the trip he dropped and destroyed his own 24-70mm. We were all full of sympathy for him, imagining what it would be like to travel all the way to Bhutan (in the Himalayas) and destroy our most important lens before we had even shot anything!

Fortunately, he had an additional 35mm prime lens in his bag, which he then used during the entire trip.

Some days later he told me that he was able to develop a different attitude thanks to this experience; that he would see his bad luck now as a great opportunity. He said because he had lost the ability to zoom, he would have to change his approach towards subject and scenery. Because of this, he said, he had captured very different pictures and was actually was developing a totally new style.

When he showed me his pictures, I was stunned.

Since then, I’ve thought about this man’s experience quite often. Back then, I had only one prime lens in my bag (an 85mm f/1.4 that I used for portraits), but I started to equip myself with more primes. Still, I was too anxious to miss a good shot, so the zoom lenses remained my go-tos. 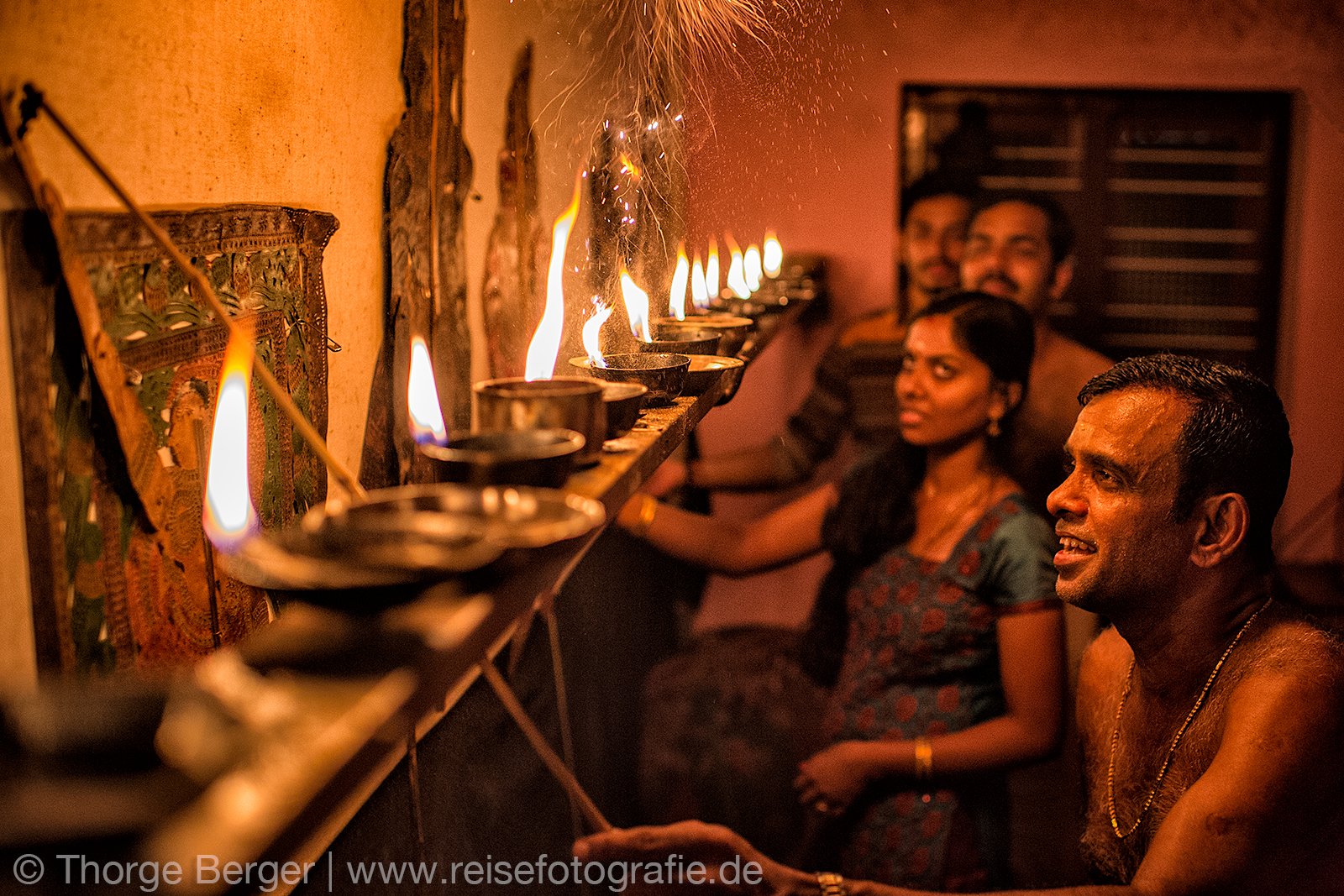 After playing with it a little in Germany, I almost forgot that I had it. When I packed my bags for another photo trip which I would lead in Kerala, south India in January 2017, I held it in my hands again and pondered whether I should carry the lens for the trip. Eventually, I decided to give it a try.

This turned out to be a meaningful decision for me.

In the beginning of the trip, I started using my zoom lenses as usual. But then on the second morning in Cochin we went out with a boat to shoot the sunrise and the legendary Chinese fishnets. On the way, we saw some nomadic fishermen in very small boats who started their business before sunrise.

Everybody was stunned by the beauty of the scenery and started shooting. As there was still very little light available, we used our widest apertures—which for the zoom lenses was f/2.8. But since our boat was also moving, we had to maintain a relatively high shutter speed resulting in very high ISO.

That’s when I remembered my 35mm f/1.4 and quickly changed lenses. I used it at f/1.4 and a shutter of just 1/125; still I needed ISO 6400 to get enough light. Later, it turned out that I was the only one among the group who was able to capture a decent shot of the scene! 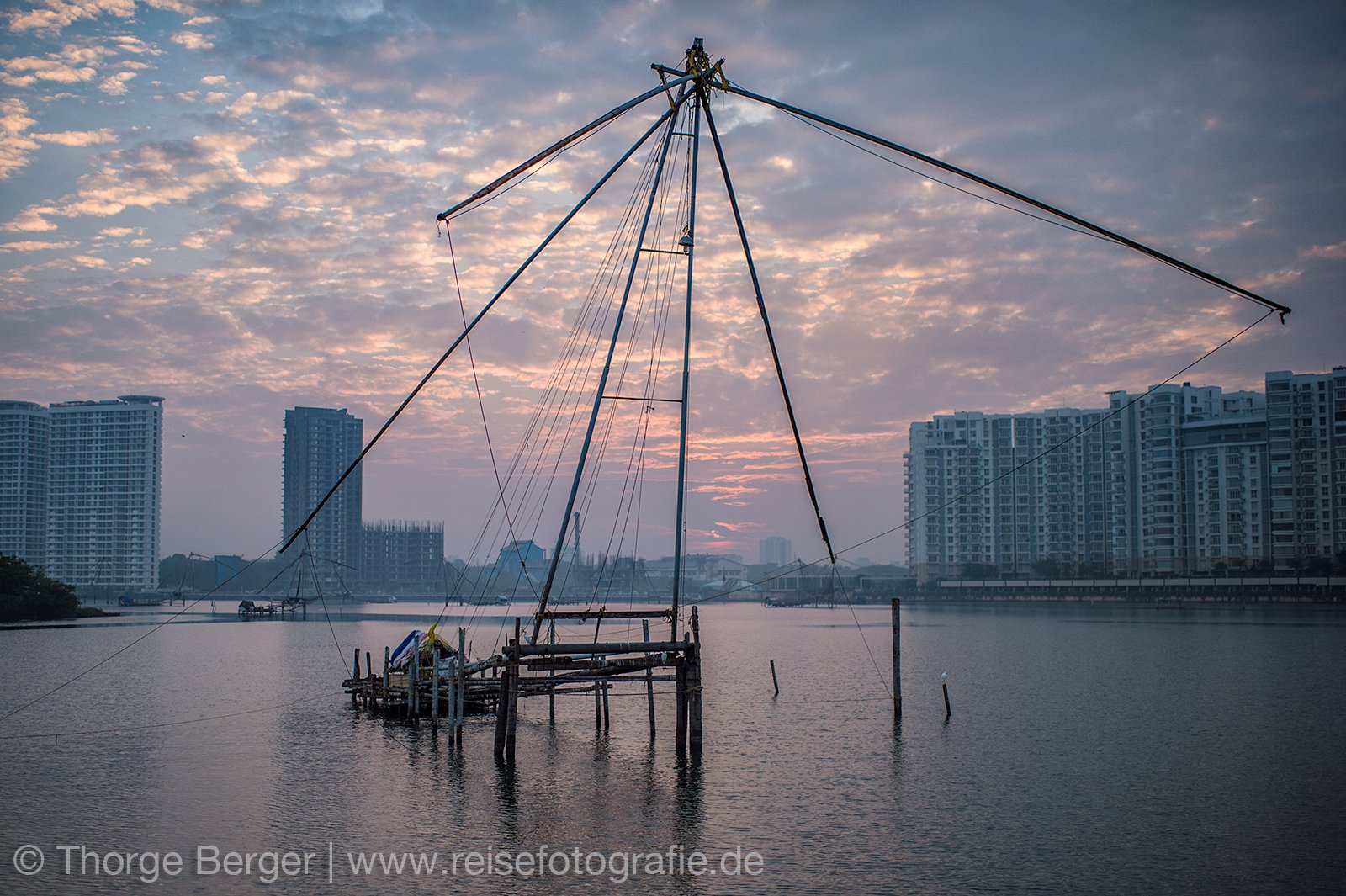 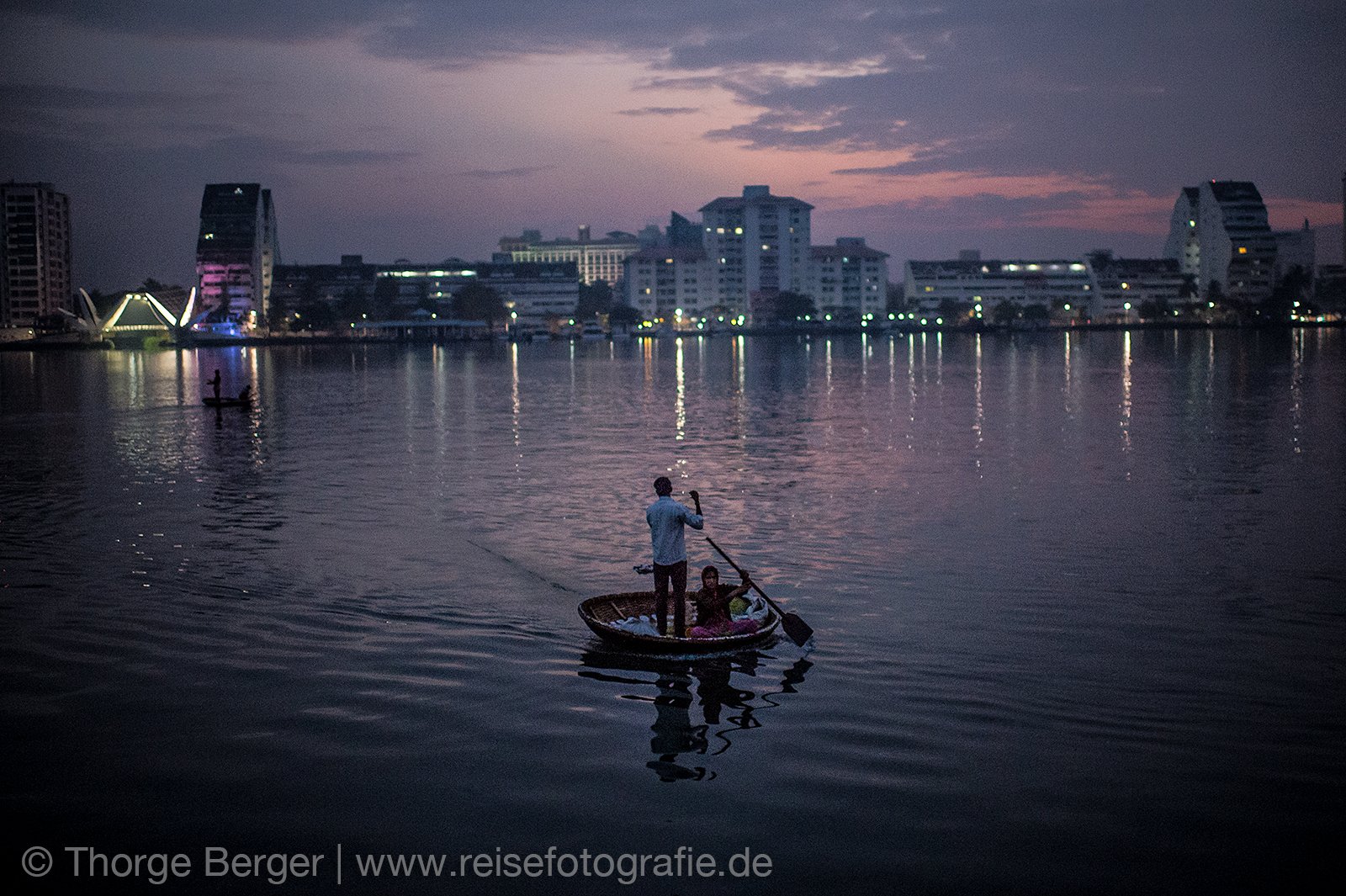 Of course, we also later shot the ancient Chinese fishnets which we came for, and here again I was using the 35mm lens.

From that day on I started to use the 35mm frequently, becoming more and more confident with actually using the 35 as my main lens. When we went out shooting a market in Cochin, I realized that the 35mm would also work well for portraits. 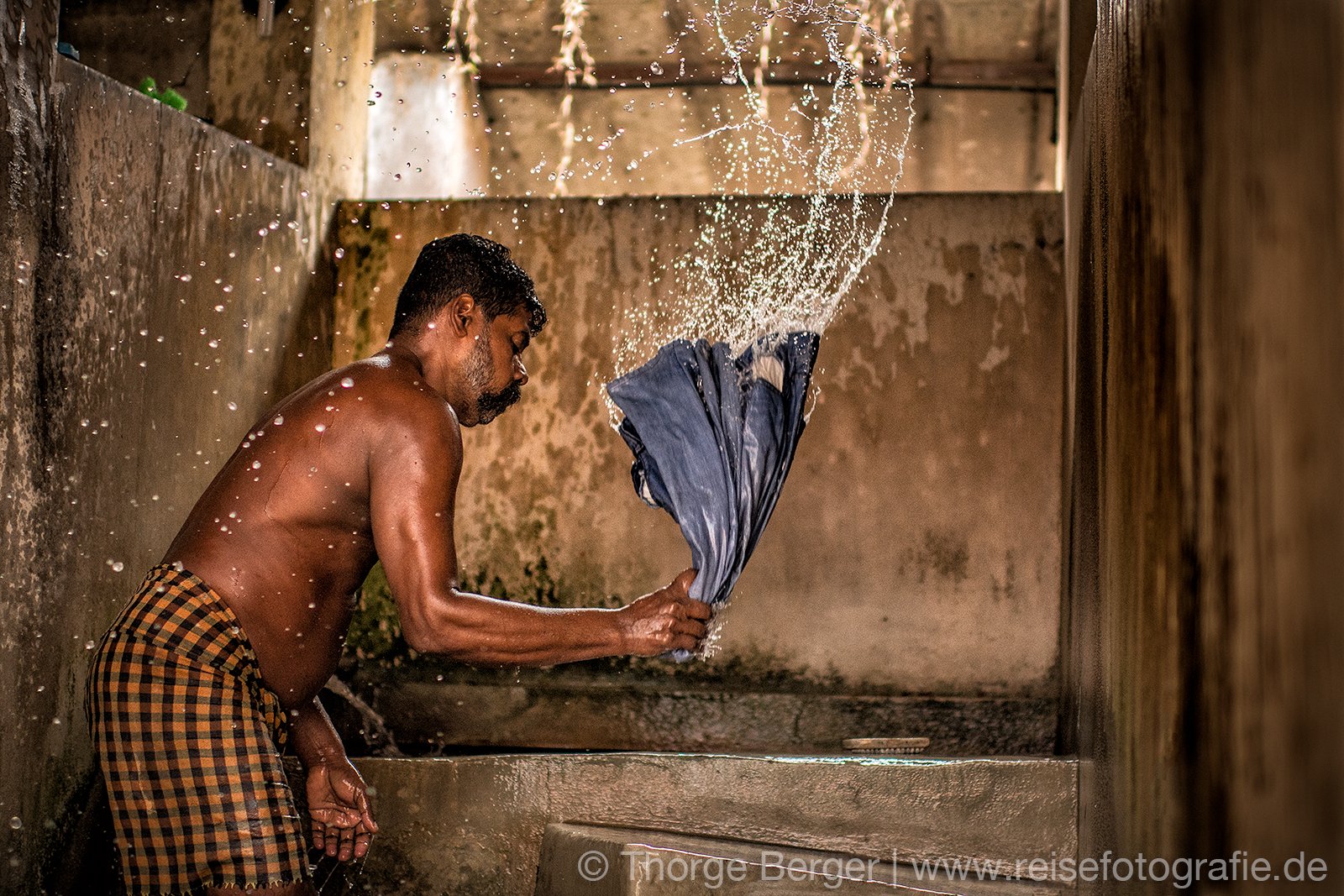 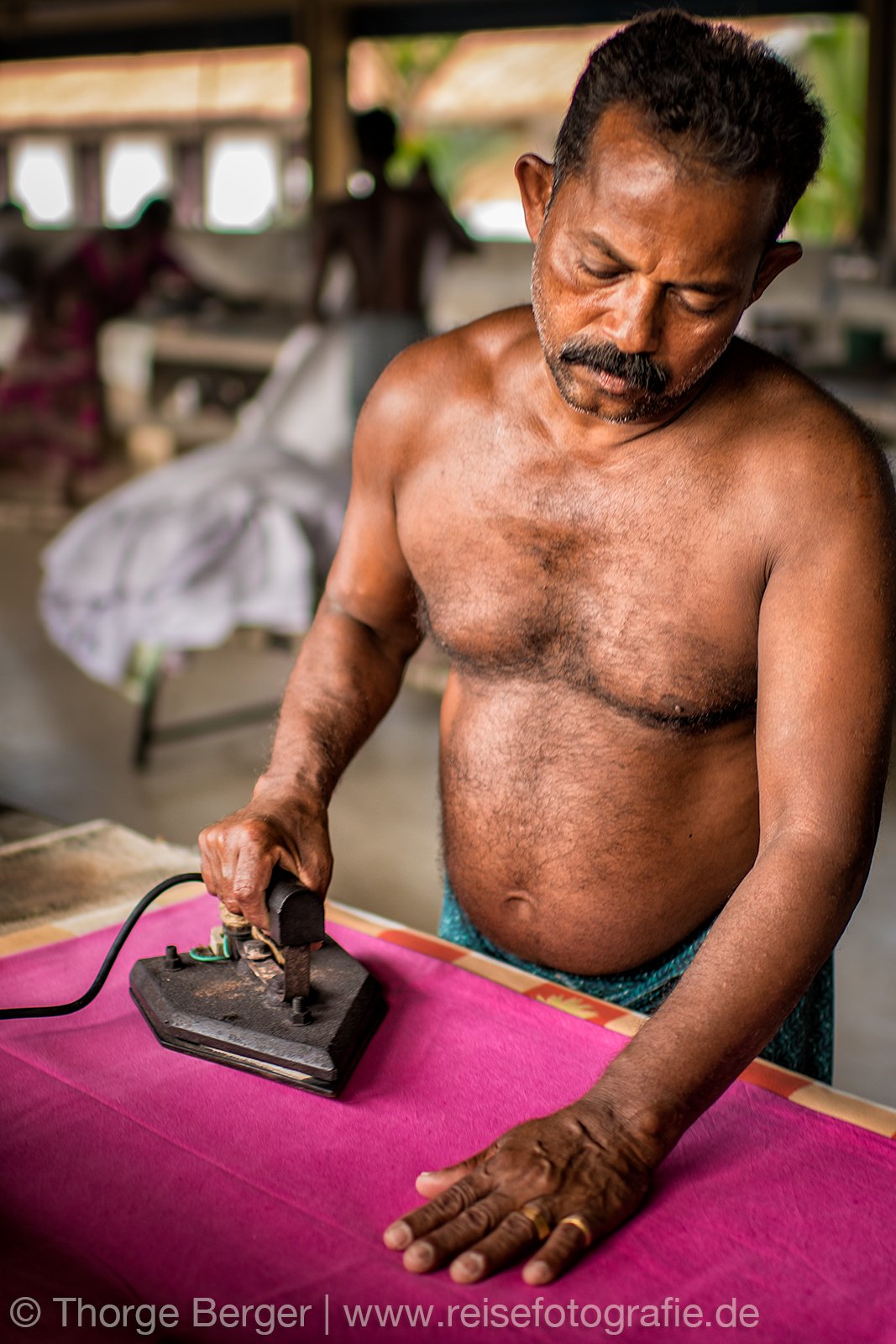 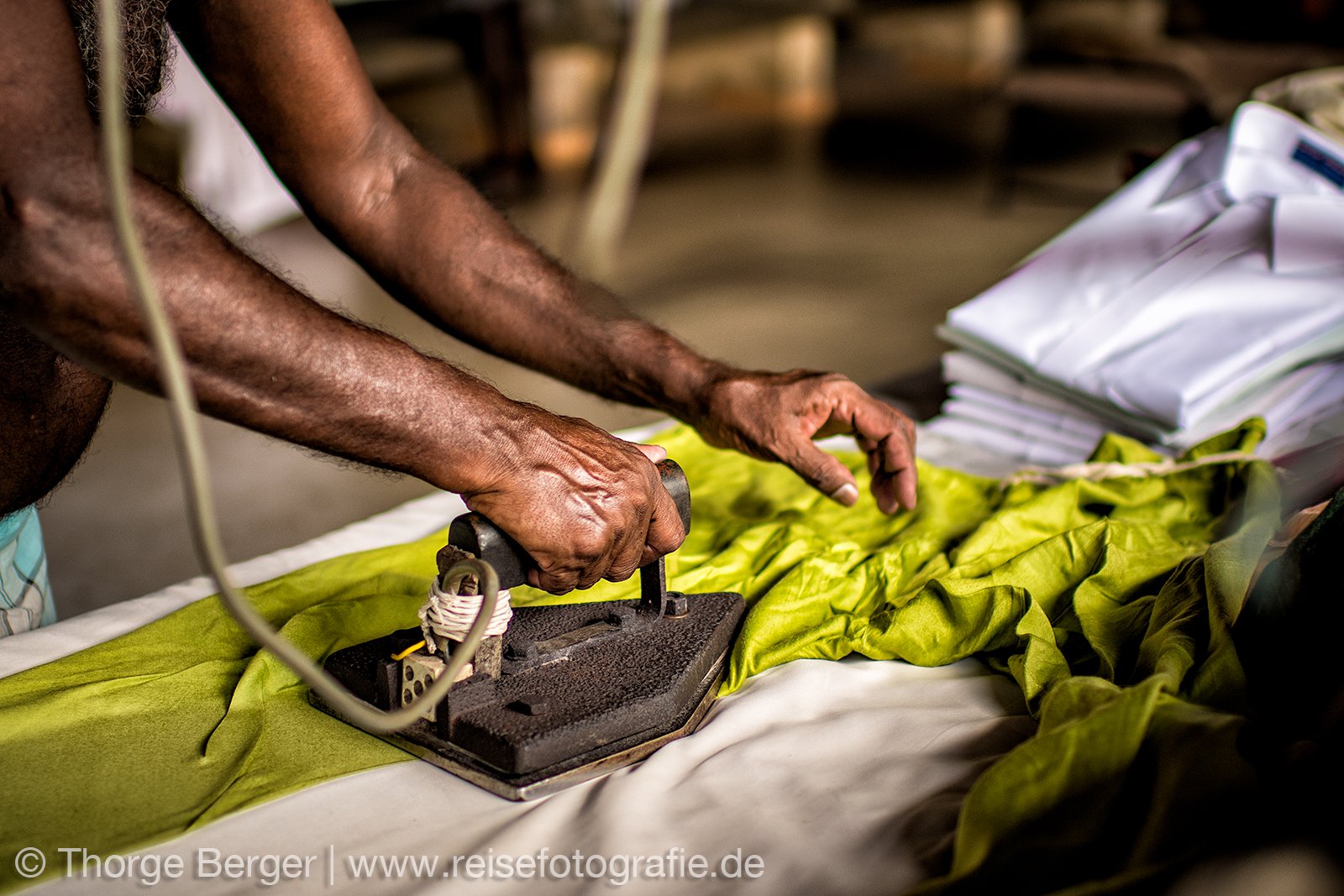 By the next occasion, I was using ONLY the 35mm. It was a laundry and I forced myself to keep the 35mm lens on the camera. As my fellow photographer in Bhutan suggested, I started to “zoom with my feet.” I realized that using a zoom lens for so many years had, in a way, made me lazy. I was now getting agile again, moving around a lot more.

On our way to the north of Kerala, we stopped in a primary school where we were allowed to take some pictures. Here I was happy to see the shallow depth of field for my composition to isolate the two girls in the foreground. We also stopped at a Christian church (which you will find quite a lot due to Kerala’s past as a Portuguese Colony) and I was able to convince the priest for portrait in his Church. 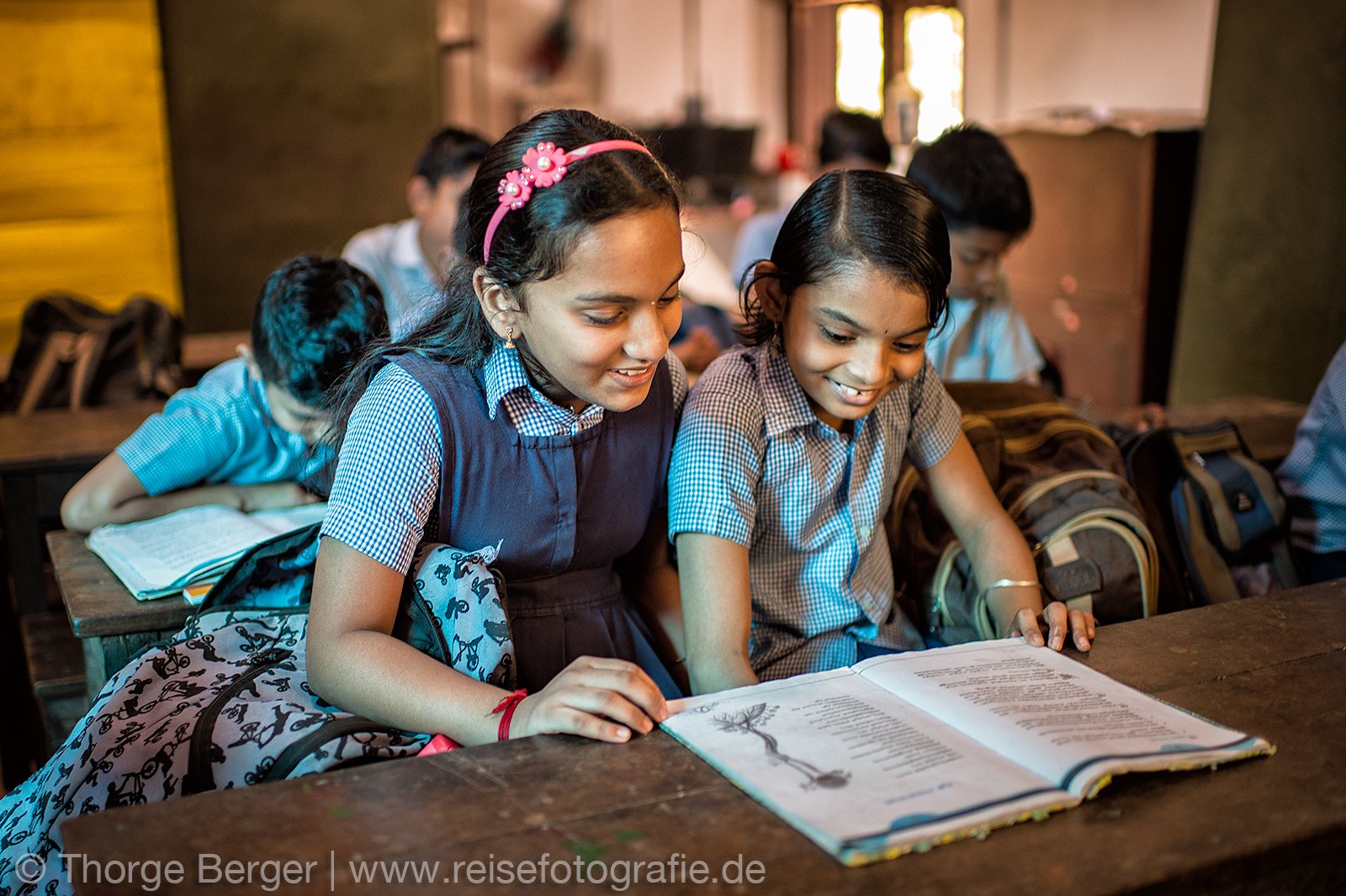 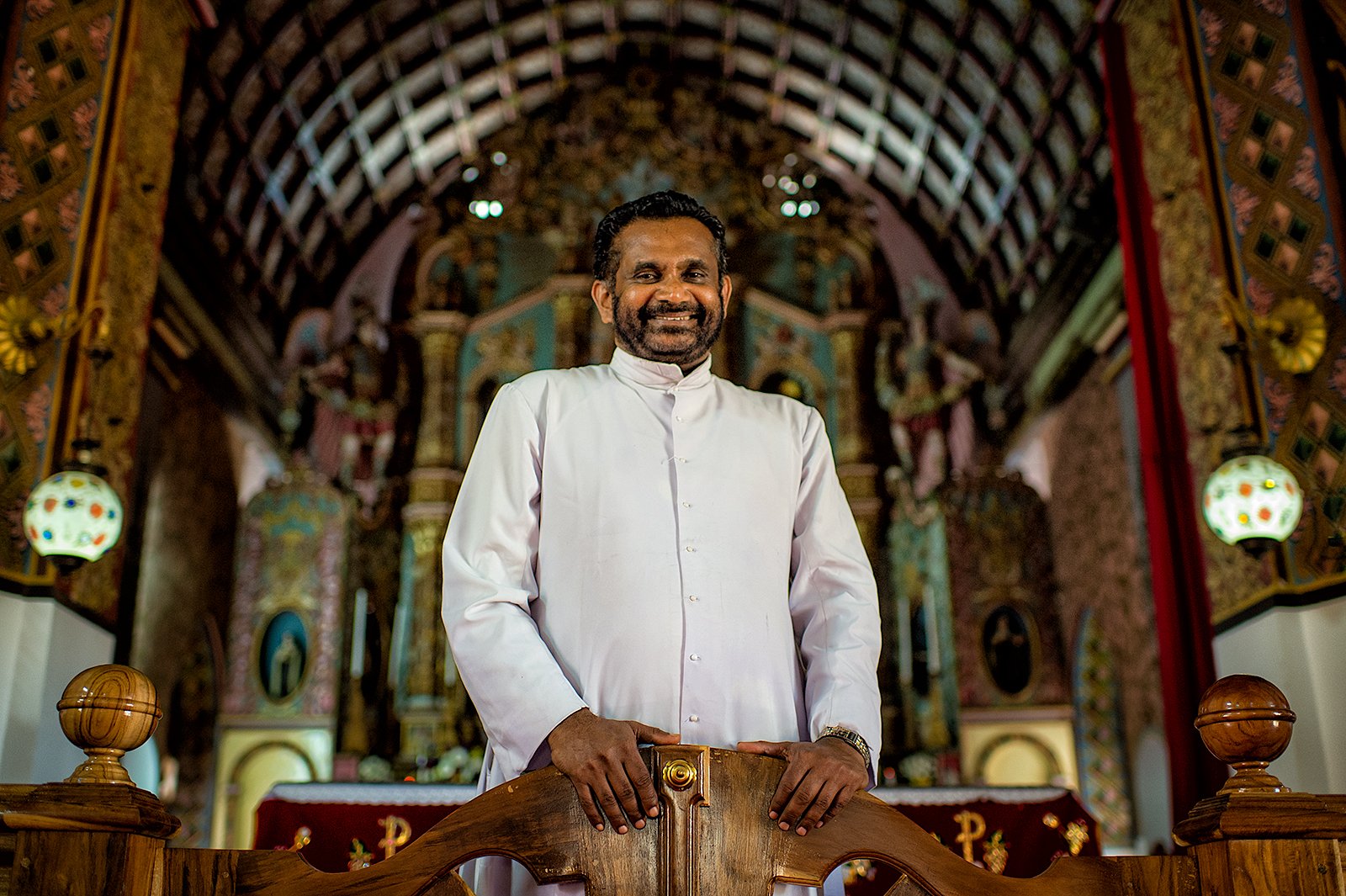 On another occasion, we stopped at a shadow puppet theater and I was allowed to shoot behind the scenes. Again I was very happy with my choice of the 35mm as there was relatively little light and the puppet players were moving much faster than you would have expected. So I shot with f/2.2 at 1/200 and ISO 2500, and was able to capture the atmosphere of the scene.

The next day we went to a martial arts school where kids learned the tradition of Kalarippayat. That is a century-old martial art form specifically found in Kerala.

Before the start of a training or fight, it is part of the ritual to do a small prayer, which I captured with one of the smallest boys in the school. Again I was using the 35mm, this time with f/1.4 at 1/80 and ISO 2000. A little later the actual training started, and I captured one girl in full-flight attacking her master—of course, with the 35mm at f/2.2 and 1/250, ISO 3200 and a fill-in flash. 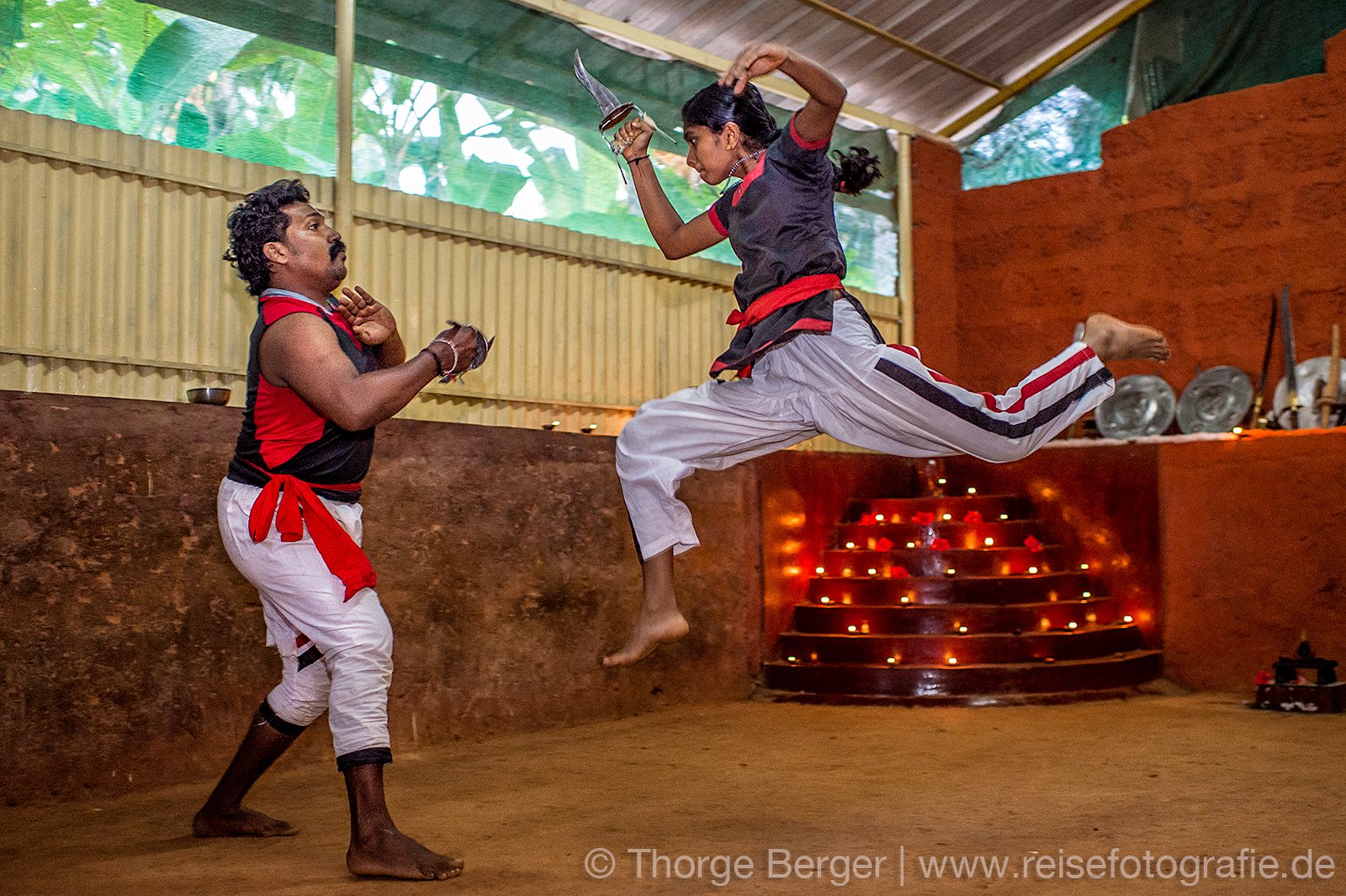 Eventually, we arrived at our major destination in the north of Kerala where we were supposed to photograph the Theyyam festival.

During this festival a human person personifies a God. By certain rituals which include particular dressing, masking and getting into a trance they actually become this Hindu God for a small period of time. And because these protagonists are Gods for a specific time, they can do incredible things such as running through big fires without getting hurt. It’s an otherworldly scene.

After their performance, the believers will also tell them their wishes, thank them for being gracious in the past, and/or seek advice in the matters of their lives. In one photo you can see the kids screaming at one of the Gods. I shot it with the 35mm at f/1.8 and 1/400 at ISO 100. 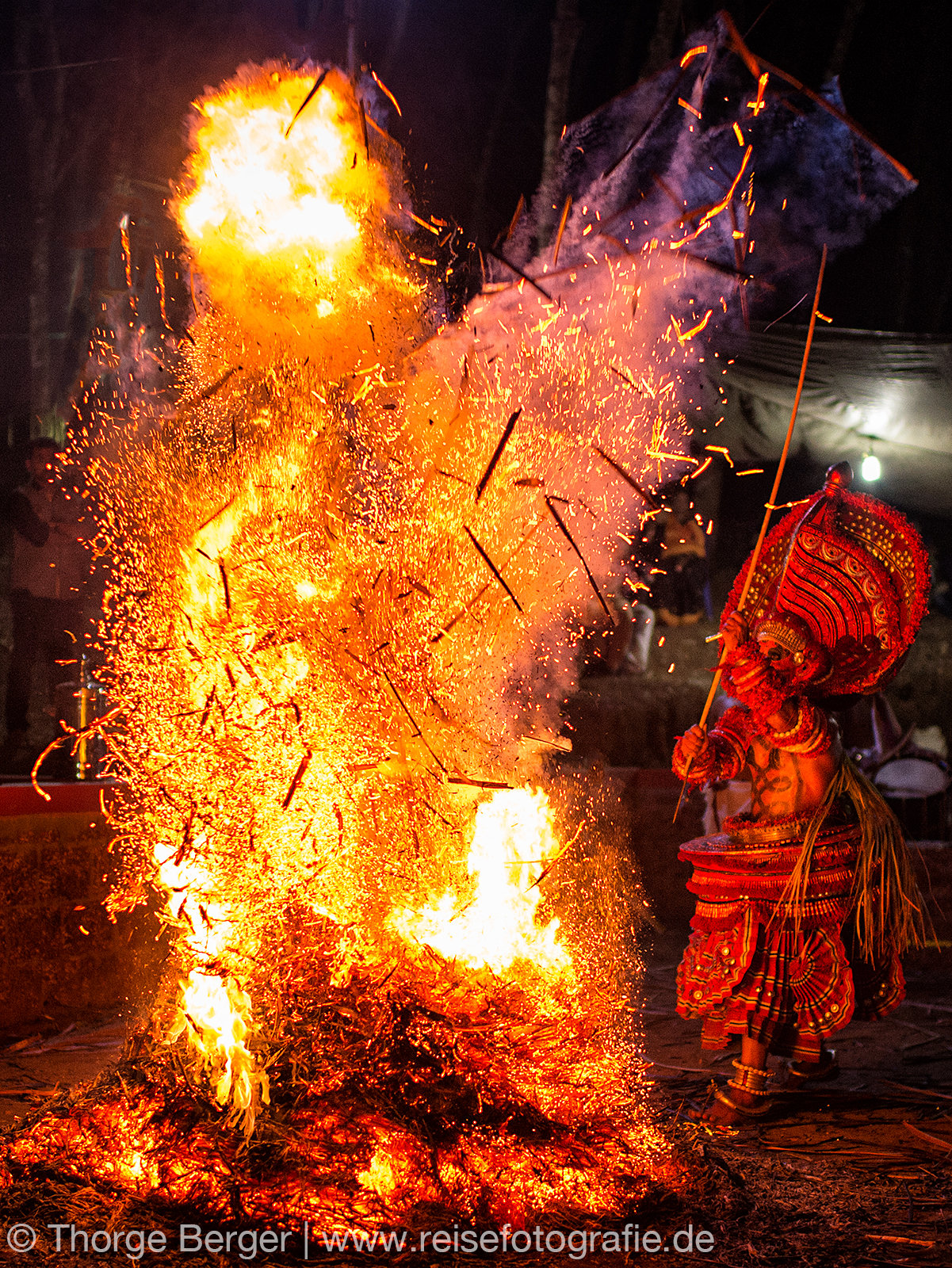 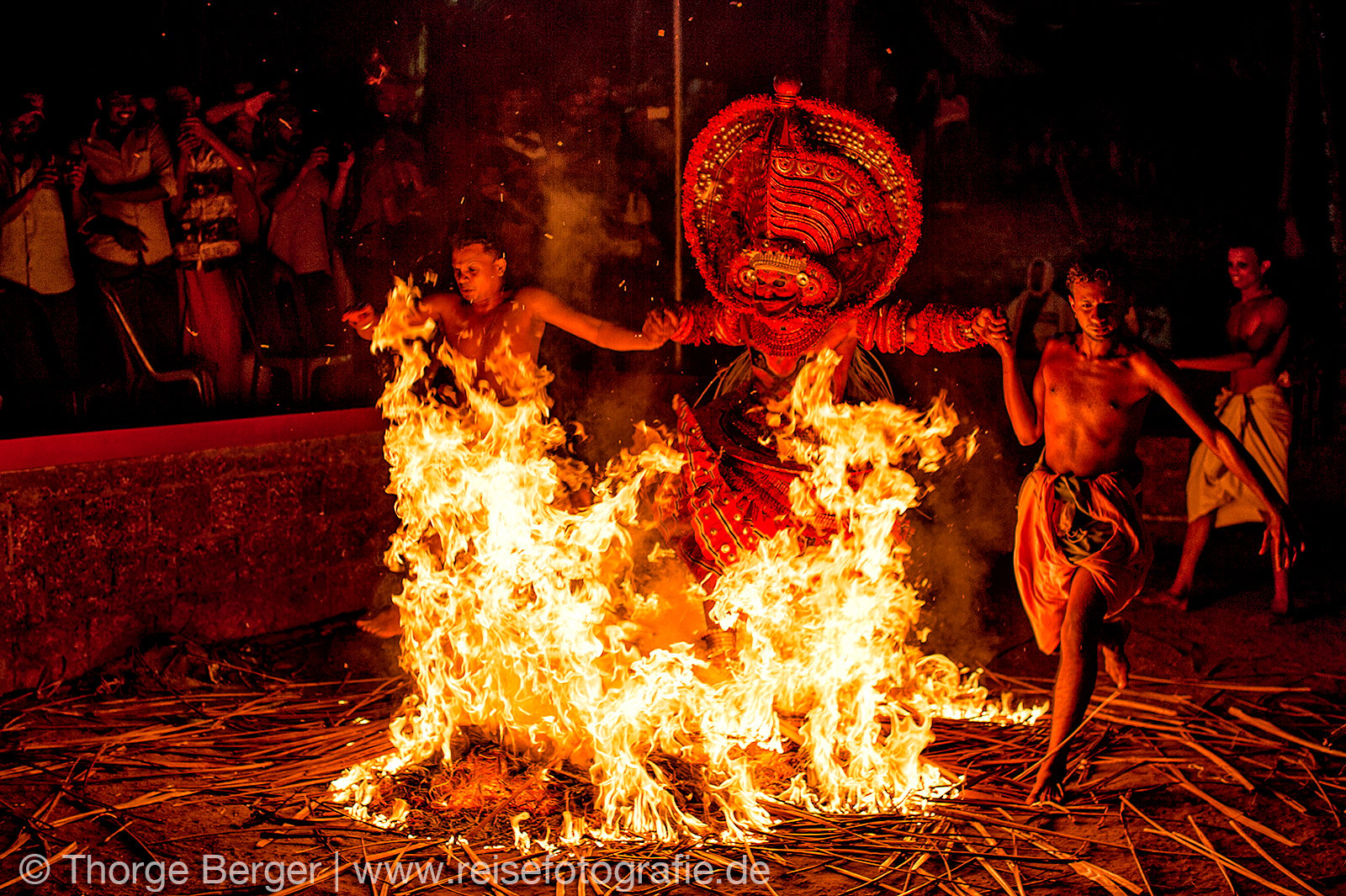 In the morning, some of the ritual drummers got very sleepy as they had played all night long, so I took a shot of them with f/1.8 at 1/100 and ISO 800. The friendly people of Kerala also invited us to join their lunch and I was impressed of the open air kitchen and the chefs doing their work for the crowds. 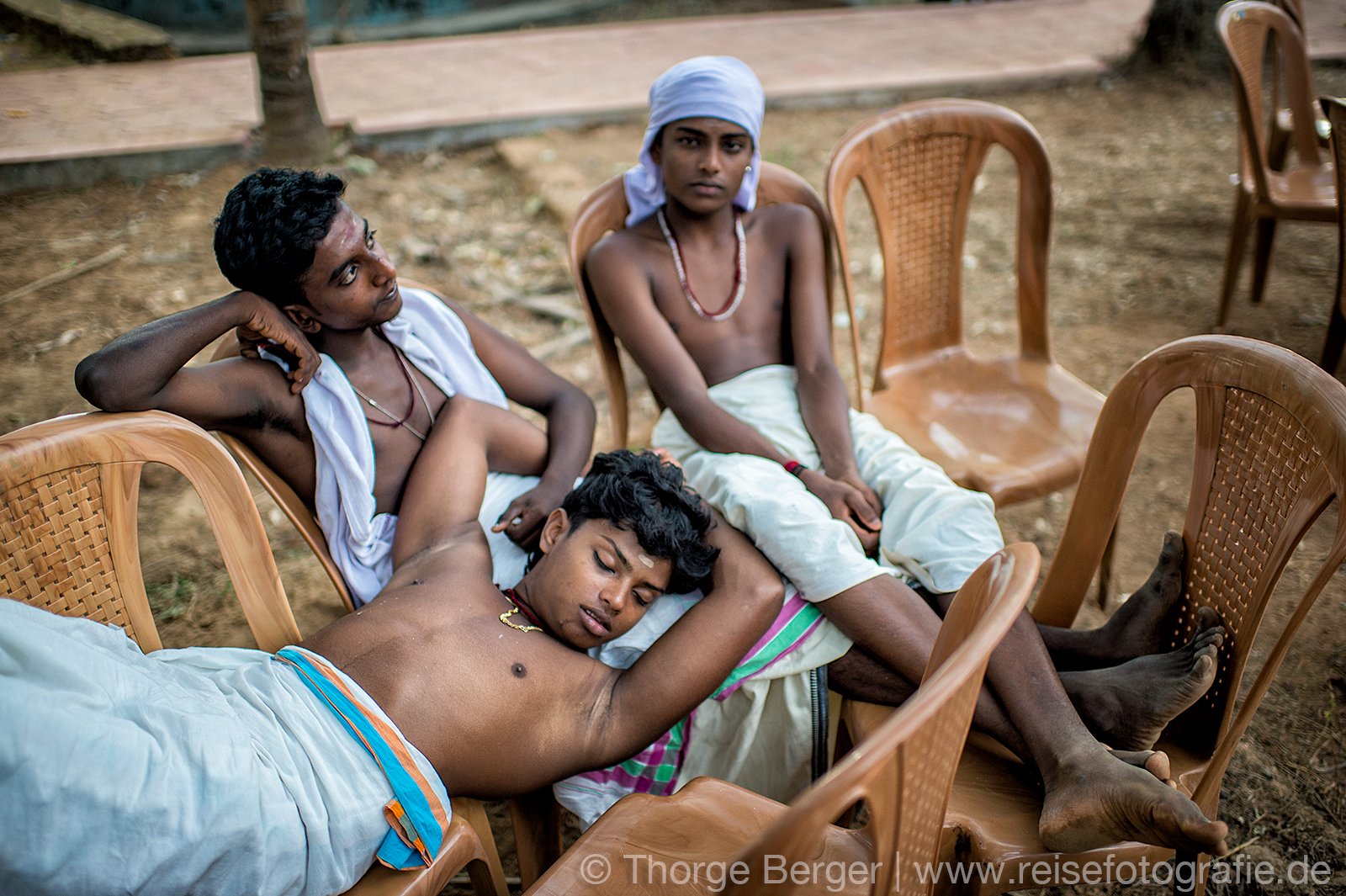 During the trip I really started to appreciate the incredible speed that was possible with this prime lens, and the particular feel, quality and sharpness of the pictures. I would have never thought this before, but while I was still on the road, I realized that the 35mm literally became my preferred lens.

I would start every morning with it, and even if I sometimes had changed lenses again over the day, I usually ended my day with the 35mm as well. After the trip I checked on the meta data in Lightroom and found the proof: the majority of my best pictures were shot with the 35mm.

Now it is certain that this lens will stay in my bag. We’ll have to wait and see … but maybe one day I will even be brave enough to leave my zooms lenses at home.

About the author: Thorge Berger is a talented travel photographer and personal development trainer, coach and consultant. To see more of his work, visit his website. This post was also published here.