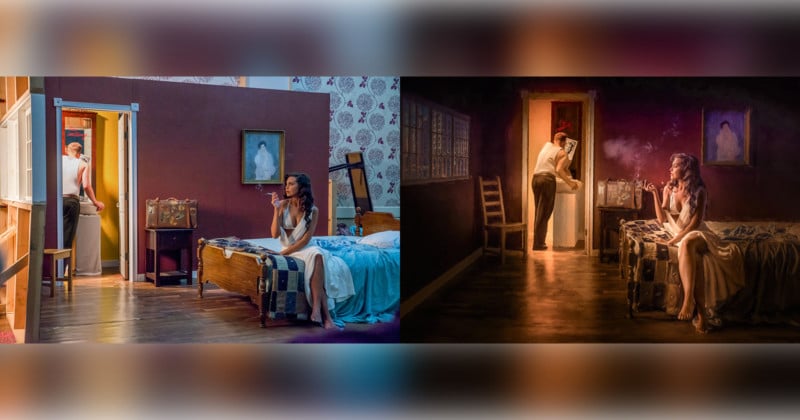 Many a person can point to a particular moment that was pivotal in shifting the direction of their life. You might call it a “watershed moment.” For my father, photographer David Edmonson, his most recent watershed moment began in the spring of 2012.

Photography has long been a part of our family’s legacy. It started as my father and grandfather. Today it’s the two of us. My dad honed his skills and built his roots over the past 40+ years of commercial photography shooting magazines, books, CD covers, and annual reports. In the days of film, one of the crafts he perfected is in camera-artistry. Before the days of digital and Photoshop, anything you wanted to create in a photograph was done through building sets, lighting the scene and a single frame of film.

Over the past 15 years, we’ve also become known as wedding photographers locally and internationally. Because of our success shooting weddings, I suggested to my father that we should repurpose a substantial portion of our marketing dollars typically spent on bridal magazines—I wanted him to have the freedom to expand his photographic horizons in whatever ways pleased him.

Needless to say, that got David’s wheels turning in all sorts of directions. But he kept coming back to one idea in particular: creating work for himself. Dad began to envision bringing together themes and ideas from multiple artistic channels onto the photographic print as a form of storytelling on different levels. Yes, that sounds esoteric, but you’ll see how it works when you look at some examples.

The first opportunity fell into his lap—we were about to go to England for my sister’s Sara’s wedding. While my father took many pictures of our family growing up, this seemed like the perfect occasion to capture a more creative portrait of my three sisters together. Something where he could celebrate their youthful bond with each other as family as they transitioned further into adulthood.

Sara is a devoted fan of author Jane Austen and infused her entire wedding with a Pride and Prejudice theme. Inspired by her idea, David purchased authentic antique accents all dated around 1820 to lend a period look, including parasols, shawls, hats, and a 100-year old edition of Pride and Prejudice. The wedding venue was already the perfect location: Cowley Manor in the Cotswolds of Gloucestershire.

David’s first attempt at his emerging vision is something cherished by our family: 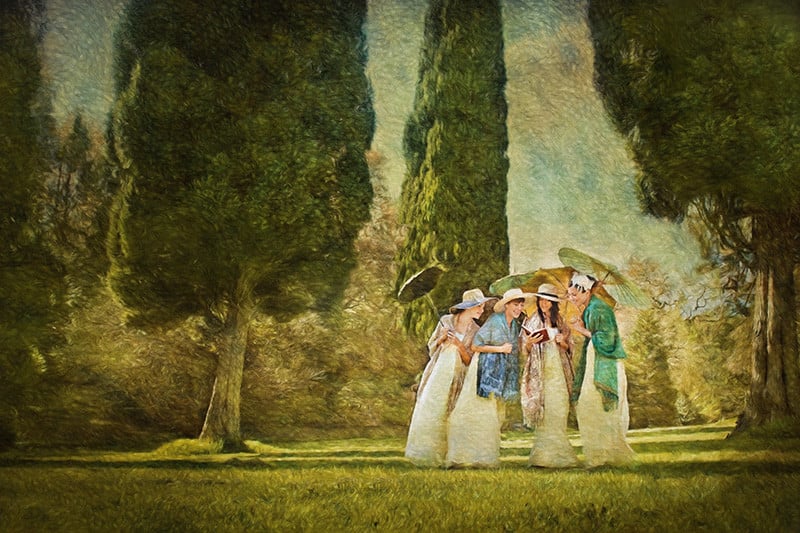 If I could peel away the layers for you, under the surface, Dad was thinking back to his college days when he first started studying art history. He often would council me that he was so young and immature at the time, in hindsight, it felt like he missed an opportunity. That internal voice inside of all of us called out urging him to become more deeply acquainted with the works of master artists. That somehow it is the key to his new vision of fine art photography.

A week after returning home, I arrived at our studio near Dallas, Texas to discover that Dad had a stroke. David woke up that morning and realized that his left arm was immobile (he’s left-handed), couldn’t see well, and couldn’t speak. While many people might call this a major setback, something that can derail a person’s life, my father felt peace.

He embraced the recovery process and worked hard at it while doubling down on his refocused enthusiasm for studying the masters and refining his vision. Most importantly, it made him realize that life is both precious and short, and there is still so much he wanted to create and communicate to our family and others.

His recovery has been nothing short of remarkable. While his voice sounds scratchy to him, for those who have no point of comparison, he sounds completely normal. He’s regained his vision and a good deal of mobility in his left arm and hand. It’s the fine-motor skills that have reduced what he can do in Photoshop. The Wacom tablets are out and it’s back to a mouse.

Then, in February 2013, my sister Elayne passed away unexpectedly. The portrait he created of my three sisters and niece in England was the last photograph he would ever take of his daughter. Somehow everything in our world began to coalescence around the themes of the arts and family.

Family, Photography, And An Italian Master

New life brought joy to our family with the birth of my daughter Holland. Naturally, her name inspired Dad to explore the world of the Dutch Golden Age and the styles of Vermeer and Rembrandt. My sister Sara lives with her husband in the heart of Rome Italy, surrounded by the works of great Italian masters. The cinematic style of Caravaggio’s paintings was both interesting and appealing to study.

When my Dad’s best friend was dying, he couldn’t bring himself to see him near the end. He feared the emotional tidal wave would sweep him away altogether. After the funeral, however, he was determined to do something meaningful for their family to honor his friend.

A piece that held his attention, in a church just a 10-minute walk from Sara’s home, was Caravaggio’s The Calling of St. Matthew (1600). My brother-in-law Francesco often takes their daughter, Grace, to see works like this on Saturdays, which is what spurred David to get deeper into the Italian masters.

Because Dad knows every member of the family quite well and understands the qualities of each of them, he started by sketching out each person’s position and the action they’d be doing. He used elements like a table and Italian Renaissance chairs to provide a framework and the direction and style of light inspired by Caravaggio’s painting.

Part of the project was a test of his ability to art direct a large group (17 people) with his still-recuperating voice. As you can see, the result is superb. 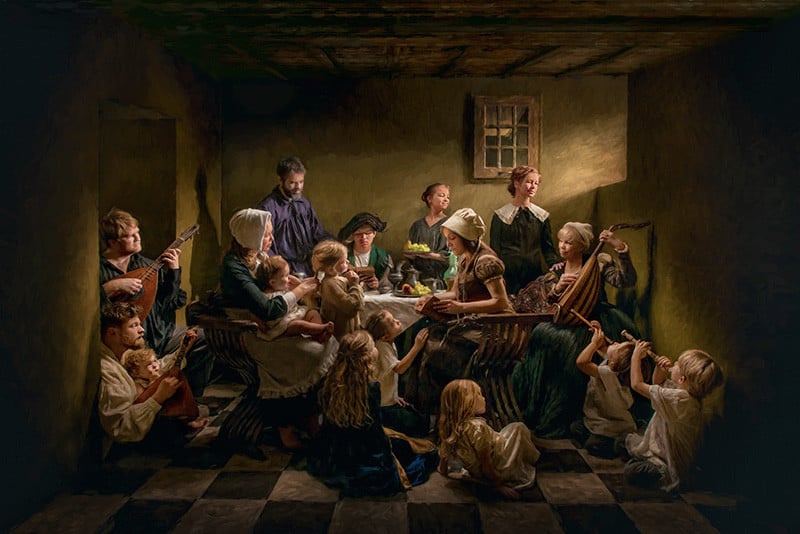 Here is the original Caravaggio from the walls of the Contarelli Chapel in the church of San Luigi dei Francesci in Rome completed in 1599-1600. 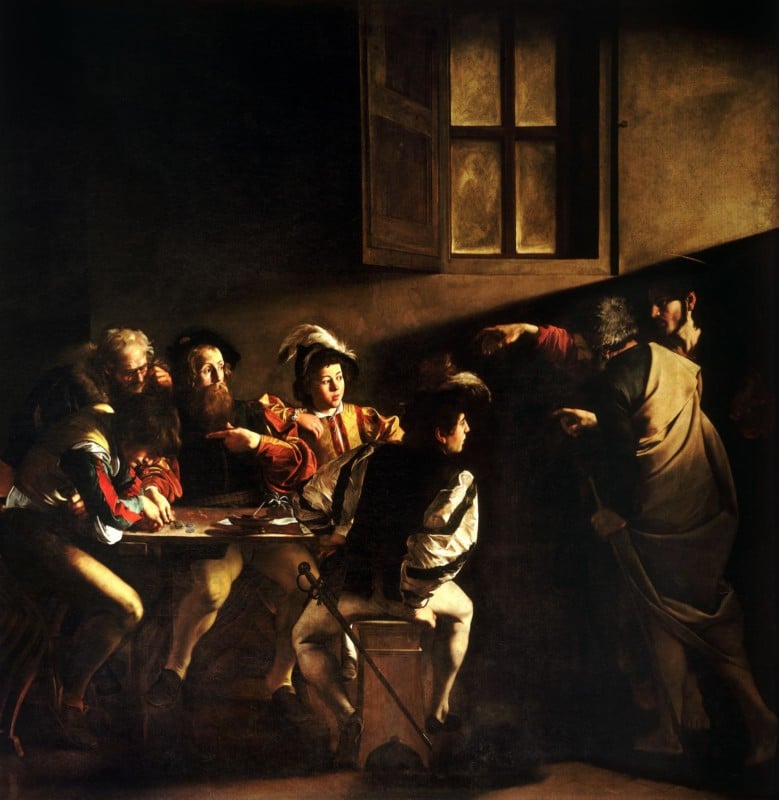 Here is David’s sketch to work out the positioning of the subjects. 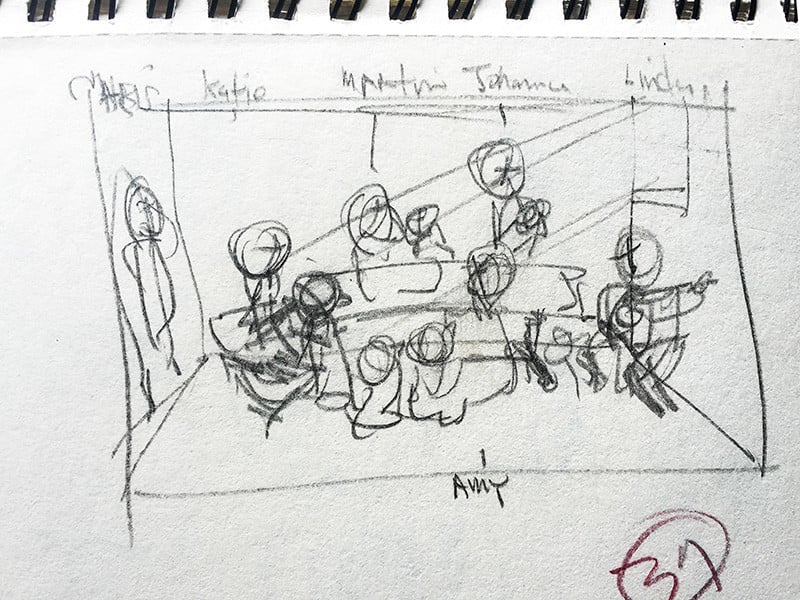 The challenge in recreating the setting of a Caravaggio masterwork is all about the lighting. The tight pools of light common throughout Caravaggio’s paintings are not unlike those used in modern cinematography. Getting it right takes a good deal of finesse, which for David starts by using mannequins to see how to make the lighting work. And it’s important to remind us that Dad’s fine art portraits are all single-capture efforts, not composites.

In the case of the Caravaggio-inspired piece, once everyone was in costume and placed in the set, he just coached them on what to do, clicked the shutter about ten times, and realized he nailed it. Ten minutes later they were all eating pizza together.

The natural question is to wonder how much time he’s spending on post-production. They can look as if they are photos of an actual painting. The answer is that since his stroke, he’s relied on a combination of Nik and Topaz filters to finish his look generally in about 10 minutes of time.

We recently finished a set piece that is a tribute to American Realism as displayed in the work of painter Edward Hopper.

Two of Hopper’s works that left a deep impression on David are Room in New York (1932) and Cape Cod Evening (1939). Both show the kind of detached distance that can happen between two people. One of the stories Dad wanted to tell is one of valuing the real connections you have to other people.

Here’s how it turned out: And here is the sketch he made to work out the lighting ahead of time: 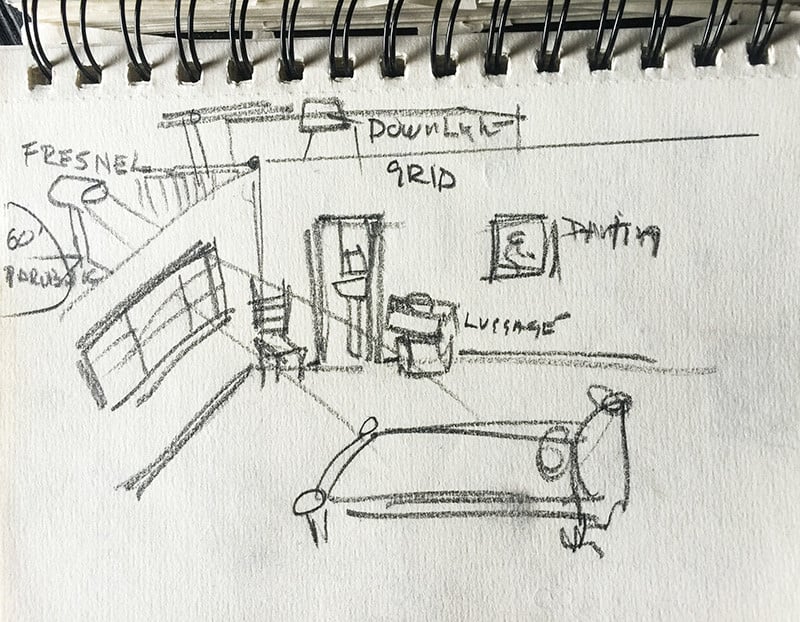 You can see how the man and woman are distant and detached, so much so that the man is infatuated with his photo of Rita Hayworth when he has his very own, very real gorgeous wife waiting for him in the next room. And there he stands, pining after an artificial substitute for the real thing next door.

Perhaps now you can understand why David’s photographs have won awards, and why his creativity is inspiring others.

I had the distinct honor of presenting my father the WPPI Lifetime Achievement Award in 2015 and what stood out to me is this. His belief that our purpose in life is to love on others and have influence in their lives. Our excuse is that we have a camera.

About the author: Luke Edmonson is a photographer and happy advocate of his father’s work. Together, Luke and David shoot commercial, portrait and wedding photography, and are frequent speakers, educators, fellows, and print competition judges. To see more of Luke’s work, follow him on Facebook, Twitter, and Instagram.