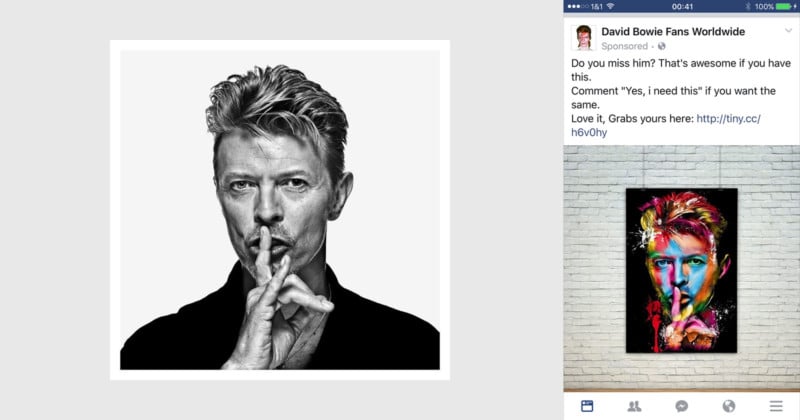 A long time friend and photographer, Gavin Evans, had the good fortune to be commissioned to photograph David Bowie in London back in 1995.

The shoot lasted just forty minutes but produced a powerful, graphic and insightful set of studio based images — you can see the images here — that have sat on Gavin’s website and in his portfolio ever since. Bowie liked the images so much he asked for some of the prints for his personal collection, hung one in his Manhattan office, described the image above as his favorite of all time and when the Victoria & Albert museum staged an exhibition devoted to Bowie’s life in 2013, he suggested that Gavin’s portraits of him should be included and used in the exhibition and catalog.

Fast forward to 2016 and the sad death of David Bowie and those same portraits gained a new currency and importance. Many people had photographed Bowie over the years but few images took on the mantle of being iconic. Gavin’s fulfilled this criteria.

Now based in Berlin and with his own gallery space, Gavin decided to exhibit not only the images previously seen but also images from the shoot that had never been seen. The exhibition titled David Bowie — The Session proved to be a critical and popular success and an open edition print sales opportunity enabled Gavin to re-ignite an income from the work, alongside a re-usage fee revenue stream.

Of all of the images from the shoot one has proven to be the most used and I think can say be described as truly iconic. It is the portrait above, which features on the poster for the Bowie musical staging Lazarus and which featured throughout the Sotheby’s sale of Bowie’s own art collection in the summer. 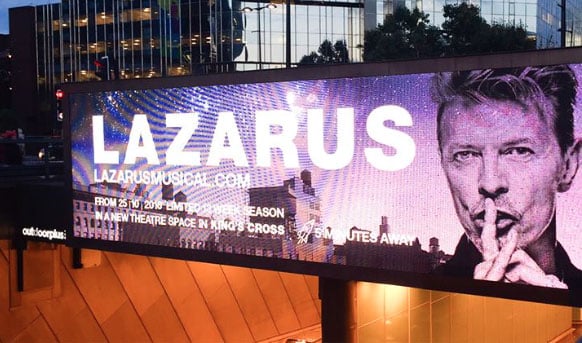 Of course we all hope as photographer’s that at some point in our careers our archive will come good just as Gavin’s has. It is one of the reasons why we fight so hard to maintain and protect our copyright. It is why we must understand what copyright is, how to use it to our advantage and most importantly of all how to explain it to our clients, particularly those who want to take it from us.

In the United Kingdom, the Association of Photographers do a good job in helping photographers in all of these respects and there are similar organisations worldwide doing a similarly good job.

However, there is a specific reason why I have chosen to use Gavin and his David Bowie images in relation to copyright as the focus for this article and it is this.

I am friends with Gavin on Facebook and I like the music of David Bowie. Facebook know the former and the latter but they don’t know or seem to care that the sponsored ad they keep posting to my timeline featuring the opportunity to buy David Bowie T-shirts, posters, mugs and hoodies features Gavin’s ‘ssshh!’ Bowie image without permission.

This blatant theft and manipulation of an image across multiple fan based products seems to be big business for those who are direct marketing to me based upon what Facebook know about my likes and interests. In the past few weeks I have been offered merchandise featuring Bob Dylan, Neil Young and of course Bowie. All of which feature the use of copyrighted images that have not been cleared or paid for (I’ve checked).

Photographers have become used to their images being used illegally over the years — photographs of pop and rock stars have been regularly appropriated by bootleggers of all kinds — but they way in which companies are using Facebook pages and profiles to promote their image theft directly to fans of the artists creates a situation in which the fans are unknowingly supporting both the theft and the company disregarding their copyright responsibilities.

I recently tried to upload a short film clip of my youngest daughter dancing to some music directly to Facebook. I was not allowed to by Facebook as the music was copyrighted, which I of course have no issue with. This proves that abuse of copyright could be addressed by the platform and that they are making some attempt to fulfill their responsibilities. But posting on a separate platform and then linking to a Facebook avoids the software block I faced, which is exactly what companies such as that illustrated above are doing. 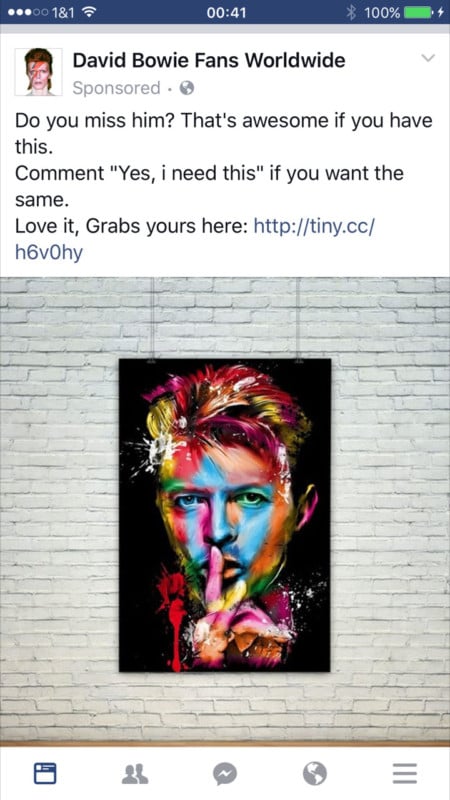 I have commented under the companies multiple sales posts on Facebook explaining their image theft with no response — their unlawful use of the Brian Duffy portrait of Bowie above as their profile image is yet another example of their ignorance of copyright and definitely not ‘aewsome’.

I have reported the posts to Facebook, with no response. The lack of response is no surprise so I felt compelled to raise the issues with you to see what you think. Maybe you have seen the David Bowie posts or similar for other pop/rock icons and feel that you would like to comment. Maybe we could start a movement!

If you do feel like joining me with this may I suggest that you post this comment: “Oi! Don’t You Understand Copyright?” Nothing more, nothing less, and let’s see if we get a response of any kind.

Of course the people at David Bowie Fans and David Bowie Fans Worldwide — with their 89,000 followers — whose Facebook pages these ads link to could never have known that I know Gavin and that I would write this article in response to their direct marketing campaign. But I do and I have!

You can see Gavin Evan’s work at www.gavinevans.com.