In late 2015, I stumbled upon a strobe called the Godox TT685: a fully-featured speedlight that has radio master and transmitter capabilities built right in. Being a Nikon user, I had never experienced that type of wireless connectivity, and I bought 3 despite being leery of the price.

Since then, Godox has made one impressive release after another, creating a robust lineup of flashes all working as a system. While their previous strobes are of familiar styles, their newest release shows they are not done innovating.

Because of my YouTube reviews and articles, Godox sent me a tester model of the new Godox Witstro AD200. Like many of their other products, it has TTL, HSS, and a built-in 2.4Ghz receiver to drop right into the rest of the Godox X Series. The lithium-ion battery is built right in, and despite boasting 200w/s, it keeps a very small form factor. Lastly, it has an interchangeable head, allowing it to switch from an omnidirectional bulb (like you would find on a monolight) or a 35mm fresnel head (like you would find on a speedlight).

This information is out on the light, so I want to focus more on specifics and how it performs. 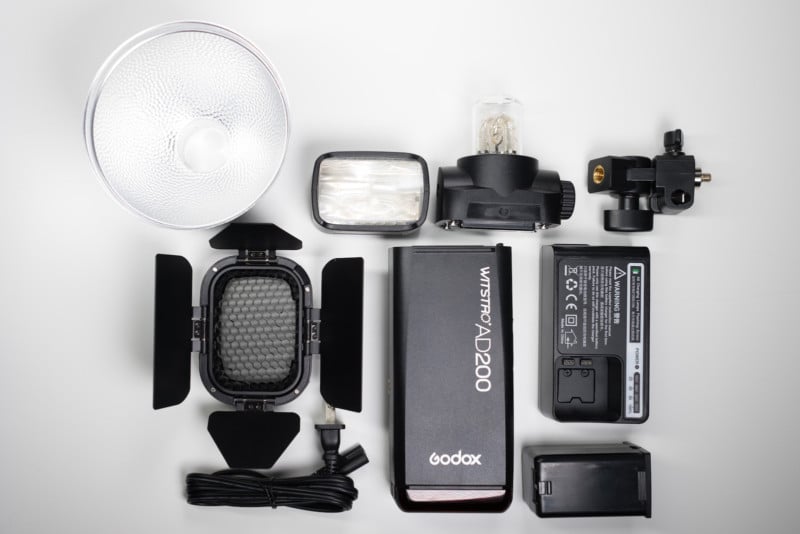 The AD200 is a bit longer than the typical speedlight, moreso with the omnidirectional head attached. It fits almost the same in the hand though. In terms of weight, it’s a bit bulkier than the speedlight as well. 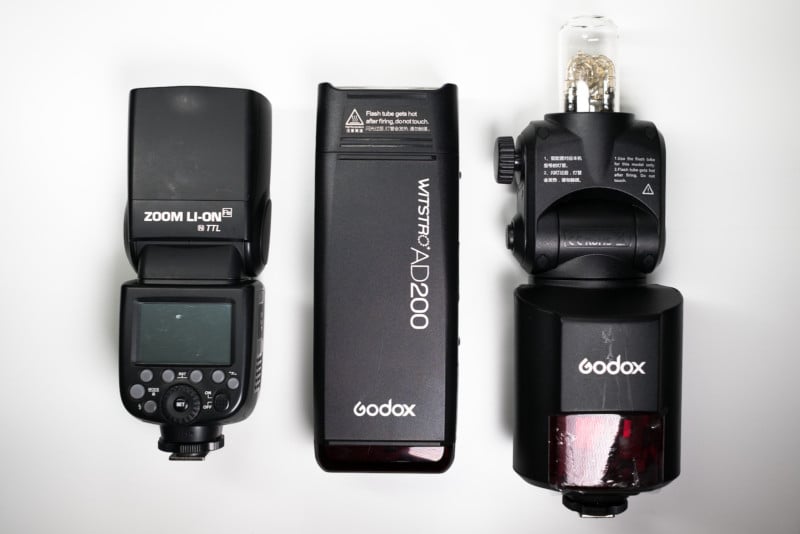 I positioned a stand and metered the light at full power against the products that it falls in between. Here were the results:

With the same style head, the AD200 metered in at 1.5 stops more powerful than the V860II-N. This means the output of the AD200 is the same as having 3 V860II-N speedlights (which are the same output as most flagship speedlights on the market).

And when flipped to the omnidirectional head, it came in .8 stops less powerful than the AD360II-N. When you consider the size of the AD200, it’s impressive that it produces that much power. If you are a speedlight only user, this light could significantly help you balance exposures and gain flexibility of position in bright outdoor conditions.

I’ll be honest, I laughed when I first saw the specs of this flash and they listed a 2 second recycle time. I just didn’t see how it was possible given the V860II has a 2 second recycle speed at full power, and that’s a far less powerful flash.

When I first pulled the AD200 out of its box, the battery was on its last bar. I put it up to 1/1 power, and boom, it recycled in 2 seconds. I continued this until I killed the battery, and the speed never slowed down.

After fully recharging the battery, I did a quick stress test. I fired it 45 times in a row and there was never any indication of heat protection kicking in, nor did it slow down. At ¼ power and below, the AD200 recycles almost instantly. The battery has enough capacity for over 500 full power flashes.

The fresnel head has 2 LED strips in it that can be activated from the controls on the back. These lights have one power setting and are not significantly bright, so don’t expect to be using it as a modeling lamp.

I was quite pleased to see that Godox continued their trend of listing the t.1 flash durations for each power output right on the display of the flash. I was also impressed to see that it is capable of reaching 1/13000 second at the lowest power setting, and is still close to 1/2000s at 1/4 power. This light will be highly capable of freezing fast motion.

Here’s the flash duration you can expect at the full stop increments.

From the back of the light, you can control the Godox AD200’s mode (ttl/multi/regular), HSS, LED, 5 groups, 32 channels, power, and access the custom functions. However, the beauty of this system is that you should rarely have to touch anything on the flash itself, aside from turning it on. The AD200 can be fired and controlled by the X1 controller, XT32 (currently for Canon only) controller, all 4 X-series speedlights, as well as the AD360II. All of these units will tell the AD200 to enter HSS automatically when you exceed the flash sync speed on your camera.

It’s worth noting here, that there is only going to be one version of the AD200, which will accept the control/TTL/HSS signals from Nikon, Canon, and Sony camera bodies using the appropriate controller. 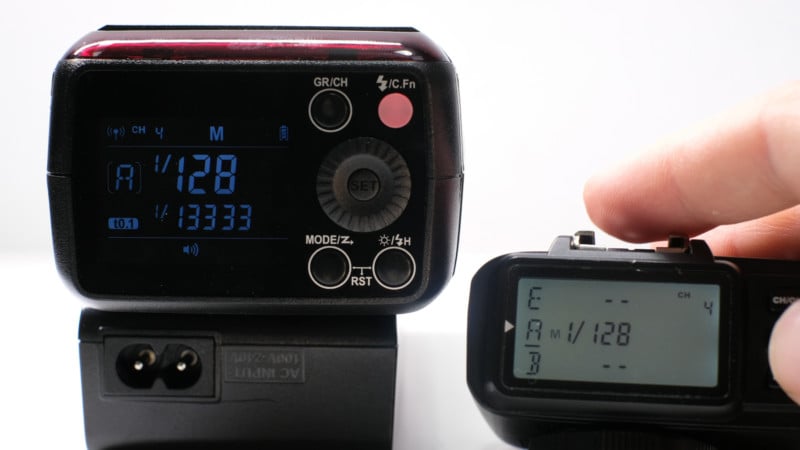 The AD200 is being listed online as a modular flash. While it does have ridges on one side and gaps on the other (to allow multiple AD200’s to stack onto one another), there is no type of mechanism to actually connect two of these flashes together. It would seem simple enough, given the multiple ¼” 20 threads on the body, to create a mount that will attach multiple AD200’s onto a single stand. I’m still waiting to hear back from Godox to see if they have plans to release such a mount.

There were a lot of question marks when it comes to how this new body style will work with the tools we photographers are already using. So, let me clear up what you can expect this to work with.

First, the Bowens S-Mount Adapter. Many people have started using this adapter to put their speedlights (or AD360II) in, and be able to attach umbrellas or Bowens S-Mount modifiers. The AD200 can just BARELY squeeze into that adapter. When I say barely, I mean you have to open the S Mount as far as it can go, and wiggle the AD200 back and forth until its ridges get over the bottom (this goes for both heads).

Once it’s in, it’s a very sturdy hold, but I would expect some may prefer a more proper fitting adapter. Hopefully Godox releases a new one designed to accommodate the AD200.

The Fresnel head will accept typical speedlight modifiers such as the MagGrip from MagMod, Rogue flashbenders, gels, and pretty much anything that is universally designed for speedlights. Godox is also releasing a proprietary Barn door/honeycomb/gel holder for the fresnel head. The omnidirectional head will accept all the same modifiers specifically designed for the AD360II as well.

The one place where I see a compatibility issue is rear-mount speedlight softboxes such as the Wescott Rapid box. Because the AD200 does not bend, nor does it have a shoe, it won’t be a great fit with those style modifiers. 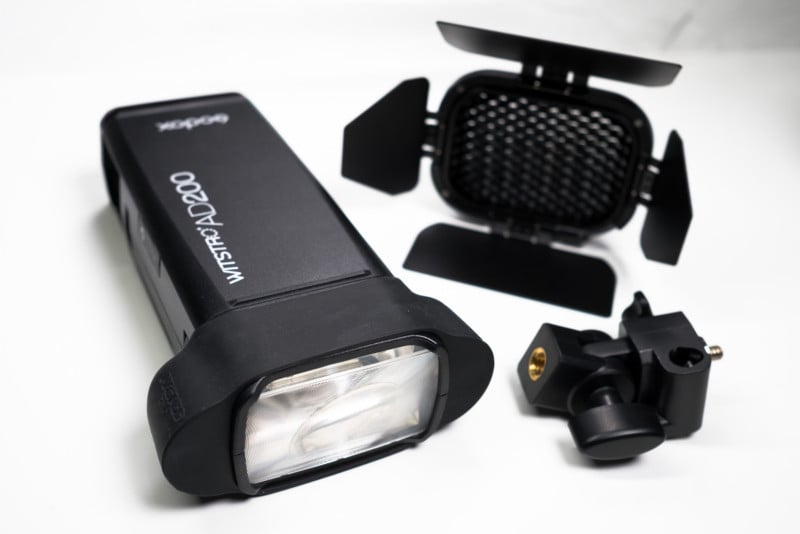 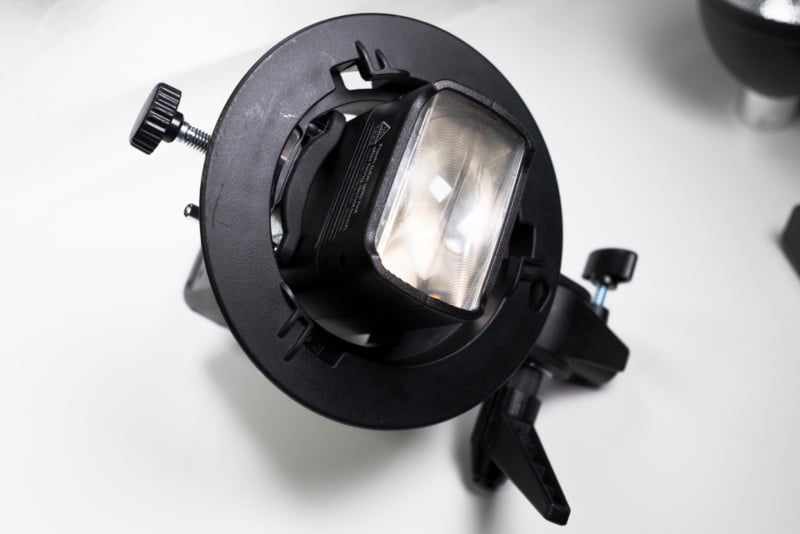 The AD200 is everything they promised on the rumor spec sheet—it’s small, fast, powerful, reliable and well-designed. One comparison I found is that this is very similar to the power you would get from an Alien Bee AB400, Vagabond, and radio gear, except it fits in one hand. For me, this is going to clear up my bag quite a bit.

Given that it falls right in between the speedlights and monolights, I’ll be getting leaving a few of each at home and filling the bag with a couple AD200’s instead.