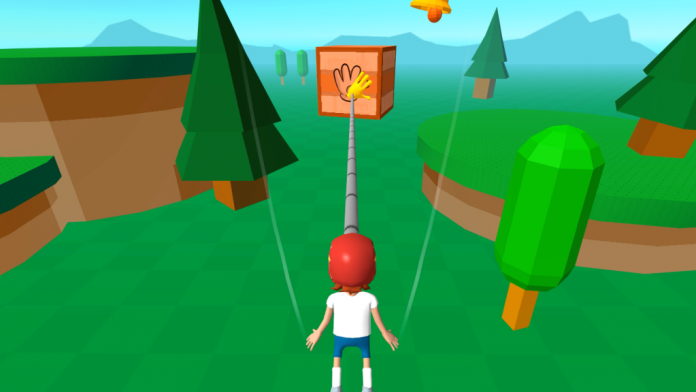 Computer Lunch’s SwingStar VR has launched as an ‘Early Access’ title for both the Oculus Rift and Gear VR, available to download in a state of seeming near-completion while allowing the developer to receive feedback on the project. As it stands however, there’s little to suggest that SwingStar VR isn’t a full release offered in favour to the established virtual reality (VR) community early.

The premise of the videogame is simple: the player must reach a bell at the end of each level by propelling their on-screen avatar through swinging arcs thanks to a handy hand attached to their helmet. The young boy over which the player has detached control is undoubtedly in for a world of hurt as he collides with walls and thumps face-first into the dirt, but given his happy expression he’s undoubtedly prepared for such adversity.

Given the simple and singular mechanic of the videogame SwingStar VR is easily comparable to 90’s arcade classics such as Super Pang or Pop N’ Twinbee. It has that same sense of a singular objective that offers a gentle learning curve before ramping up expectations. With only headlook and the Xbox One controller’s A button (on Oculus Rift) defined as inputs, the player will quickly adopt the ideals of distances and attachable objects, and the arc at which they need to proper their avatar to make it between. Curiously for a videogame so hellbent on throwing the player around its levels, SwingStar VR never once raised concerns of experiencing simulator sickness.

The level design is clearly SwingStar VR’s strongest suit. Beginning with simple tasks that teach the player the ropes the videogame soon expands with new items and less obvious paths. It’s not long before you’re being fired out of cannons, accelerating by spinning full circles on yo-yos and having to double-back on yourself after gaining height to find that all-important bell. 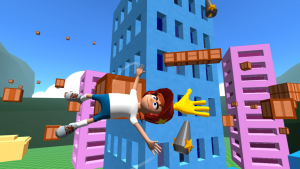 SwingStar VR offers a three-star rating system dependant on performance, taking into account the number of swings used and the damage endured by the young boy. However, the delight involved in SwingStar VR is counter-intuitive to its scoring mechanism; the best moments of the videogame are when the player is granted a deep and complicated arena to swing through at will, often ignoring incremental setbacks in favour of building momentum for a faster or further launch.

Limited visually, SwingStar VR is based on the same cartoonish colourful palette as the likes of Super Mario 64 and Lucky’s Tale, but without the same level of polish. The sliver bar that extends from the avatar’s helmet to the hand that holds him often appears to simply be drilling into his head while the objects within a level are not always clearly defined. While it would be easy to suggest that Computer Lunch has practically nailed the gameplay mechanic they were aiming for, the visual quality of SwingStar VR does leave a lot to be desired.

Available now via Oculus Home’s ‘Early Access’ channel, there’s currently no release date set for the final version of SwingStar VR. If Computer Lunch has chosen this path for feedback it would be easy to suggest that a visual tidy is the key area needed to concentrate on, as while SwingStar VR is never going to be seen as a highlight of the Oculus Rift or Gear VR’s respective software catalogues, it is a fun and unique VR experience that is already achieving many of its goals.