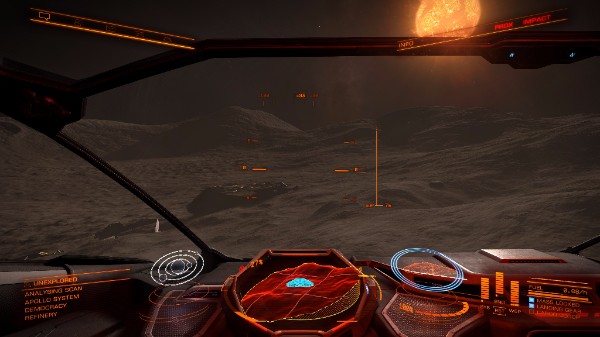 Elite: Dangerous has been somewhat of a talking point in virtual reality (VR) circles of late. Originally built to encompass Oculus Rift head-mounted displays (HMDs) as part of its entourage of modern technical prowess, a change in Oculus VR’s SDK left Frontier Developments out in the cold. Though still assuring that the title will make realign with the Oculus Rift at some point, in the meantime the tide has turned and Elite: Dangerous will be offering compatibility with the HTC Vive HMD in the coming months.

Elite: Dangerous has always been a compelling experience in VR, and on HTC Vive it’s no different. Although the development kit hardware in no way compares to the consumer version of the Oculus Rift, the lower resolution and discomfort of the HMD do not impede he enjoyment of the experience. A seated experience, as the demo version of the videogame was solely concentrated on cockpit-based combat, the HTC Vive HMD is used in exactly the same way as the Oculus Rift; without motion controllers. Instead, Frontier Developments chose to showcase Elite: Dangerous in a comfy chair with HOTAS.

The HTC Vive preview was limited to training missions only, however a decent variety of scenarios was made available to VRFocus. A single heavily armoured vessel and an ally to help take him out, slow moving carrier ships benefiting from faster, lightweight ships offering suppressing fire, a wave-orientated battle wherein each enemy disposed of leads to another band of more aggressive fighters. Furthermore, each of these scenarios offered different weaponry to the player, showcasing the machine gun, rail gun, rockets and lock-on artillery.

Within each remit the player must use a different tactic. Going up against fast-moving craft in a head-to-head battle will never end well, despite the fact that their shields deplete very quickly. Swift manoeuvring is required to get the best of them, whilst slower moving ships can easily be caught from behind unaware, giving you time to secure a lock-on. Relying solely on brute force in this preview build is not an option, though further into the videogame it may well be possible to obtain a ship and weaponry that allows you to do just that.

Unlike the most direct competition to Elite: Dangerous, CCP Games’ EVE: Valkyrie, lock-on rockets are not commanded by your viewpoint. The lock-on has a small radius from the direct front of your ship, and so while being able to look around a large spectrum outside the windows of your ship increases immersion greatly, it has little effect on gameplay. Elite: Dangerous is not a lightning-fast arcade style space combat videogame, it’s a tactical assault that demands shrewd judgement from the player. 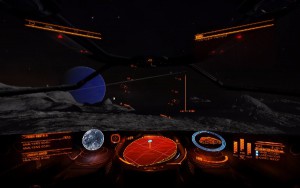 One significant benefit that Elite: Dangerous has over much of the VR playing field at present is that a full videogame already exists. Elite: Dangerous will launch its VR compatibility into an existing videogame universe, immediately offering those who already own the title a new opportunity and those coming to it purely from a VR perspective a huge expanse of gameplay to explore. Elite: Dangerous has already set the videogame world on fire once, and with VR it has the potential to do it once again.