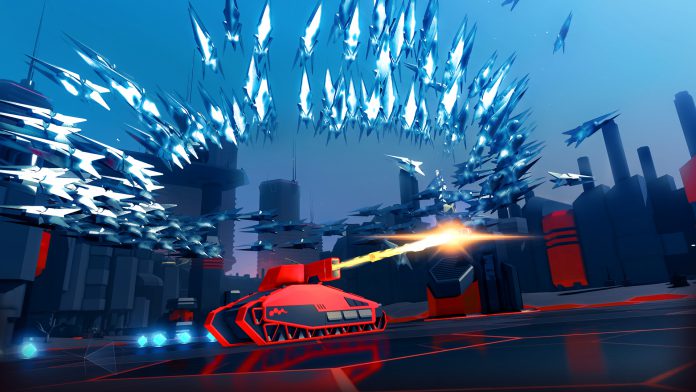 UK-based developer Rebellion had big news to share this week, confirming that its upcoming virtual reality (VR) tank battling title, Battlezone, would be a launch title for the PlayStation VR head-mounted display (HMD). The reboot of the classic series will hit PlayStation 4-based device first next year. The news came as a small surprise given that, just last month, Battlezone was confirmed to be heading to the Oculus Rift PC-based HMD too, even making an appearance at Oculus VR’s own keynote speech at Oculus Connect 2. PC VR fans need not worry, however, as Rebellion has confirmed that the Oculus Rift version is still happening.

The developer confirmed as much in a recently updated FAQ on Battlezone‘s official website. “Battlezone is a VR title coming first to PlayStation 4 and then later on Steam for PC [TBC],” one answer reads, “however Rebellion has always been a multi-platform developer and we’re looking into other platforms too. While we can’t confirm anything yet don’t be surprised if we add to this list in the future.”

A second answer is far more direct: “We’ve already confirmed support for both PlayStation VR and Oculus Rift ™, but we are looking at the potential of other VR platforms too – though we can’t confirm anything right now.”

The ‘other platforms’ mentioned also provides an answer to anyone asking after possible support for the HTC Vive-based HMD from Valve. PlayStation VR itself is set to launch in the first half of 2016, so Battlezone should be on the market anywhere between 2 to 8 months’ time. It’s not yet clear if the Oculus Rift and other possible versions will arrive later on in 2016 or are being held back until 2017.

VRFocus will continue to follow Battlezone closely, reporting back with any further updates on its progress.