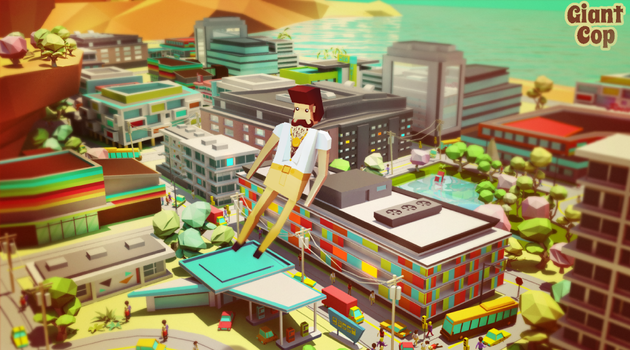 Virtual reality (VR) technology is bringing about some truly innovative new titles and experiences. Using head-mounted displays (HMDs), players can taxi zombies around town, control giant stone golems and more. Now Other Ocean, a developer mostly known for mobile titles, has its own intriguing take on the tech to show off in Giant Cop. As the name suggests, this new title will position tracked VR to cast players as an enormous police officer.

Little information about Giant Cop has been revealed so far, though the developer has shared a GIF of the title in action and an official website that’s due for an update to detail VR support. Standing in the middle of a city, players will survey the area and then pick up any criminals they find using position tracked controllers and through them into a police station with a large funnel fitted to its roof.

Official platforms haven’t been commented on, though Other Ocean did post a subject about the title in the subreddit for the HTC Vive, suggesting it’s on its way there. One that very thread, the developer noted that it still has a ‘long way to go’ with work on the title, and is taking suggestions from fans as to what it should add to the experience.

Stay tuned to VRFocus for more on Giant Cop as it’s announced.