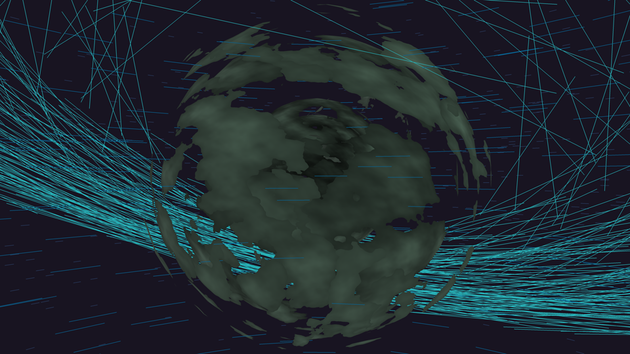 As virtual reality (VR) moves towards a consumer market, the industry is seeing more and more high-profile, big budget titles being revealed for the tech. But there’s still plenty of space for smaller independent developers to create some unique new experiences for head-mounted displays (HMDs) that don’t necessarily fit into a set genre of videogames, film or otherwise. Indie developer Samantha Kalman, best known for her work on music-based puzzle title, Sentris, is working on two such titles right now in Project Red and Unwinding.

Both of these projects are experimental pieces, with both currently sporting code names. Unwinding (pictured just above) was first revealed back in October 2015 and is described by the developer as a meditative experience in which players will explore an impossible space using a ‘pseudo-outer space motif’. The title is planned to release on the Gear VR mobile-based HMD, though Kalman hasn’t yet decided if it will be a full experience or perhaps a release for the Oculus Concepts section.

Project Red, on the other hand, is inspired by classic musical shooter, Rez, which itself will be coming to the PlayStation VR HMD in the future. Kalman describes this project (pictured in the header) as ‘the yang to the yin of Sentris‘. Players will explore an ‘indefinable structure’ which the developer explains offered her a chance to ‘let go’ from the development process of Sentris.

Kalman is detailing progress on both of these projects and others on her blog, and is also running a Patron campaign for those that want to support her work going forward. VRFocus spoke to the developer all the way back at E3 2015, before either of these projects had been announced. We’ll be sharing out full interview discussing her work later on in the week, so check back soon.