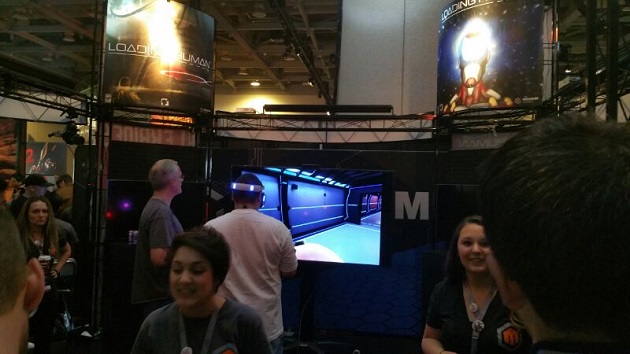 Now that the keynote speech has finished attendees at the 2015 PlayStation Experience (PSX) in San Francisco, California, can now enjoy the main event. There’re a fair few PlayStation VR titles on show and available for demonstration. One of those virtual reality (VR) videogames happens to be Loading Human by indie developer Untold Games. For the show the studio is demoing a brand new build of the title which features new content.

This new build now includes the ability to extinguish fires, how this helps in the stories progression or character advancement is currently unclear. Loading Human is a first-person title in which players are cast as Prometheus, the son of a famous scientist that must locate a massive energy source in order to save his father’s life.

Untold Games’ CEO Flavio Parenti recently said in an interview: “We are developing Loading Human only for VR, and there is a reason to it.” Adding: ‘if you want to make good VR, you have to think for VR.’

This is after Parenti also revealed how well the title was performing: “We’re running smoothly on the PlayStation 4 with [PlayStation VR] at 75 frames per second, which is kind of amazing. There are a lot of objects, you can interact with all of them.”

The title will also support Oculus Rift, which Oculus VR state will need 90fps as the recommended minimum, but PlayStation VR will be able to reproject up to 120fps.

VRFocus will continue to bring you all the latest VR news from PlayStation Experience as it emerges.