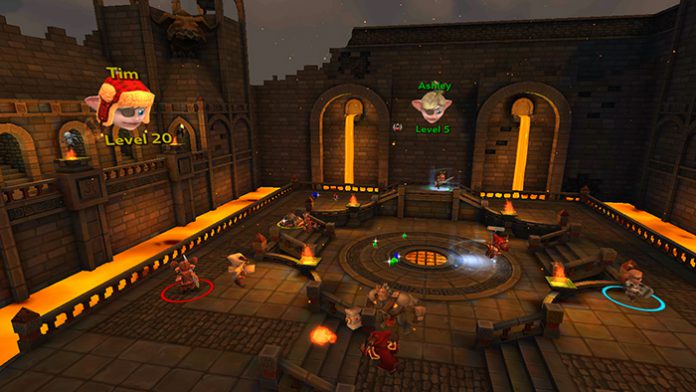 The Oculus Rift virtual reality (VR) head-mounted display (HMD) is just weeks away from making its big debut now, but creator Oculus VR isn’t forgetting about its other HMD, the mobile-based Gear VR, made in partnership with Samsung. This week has seen the company introduce new social elements to the device as the latest compatible smartphones, the Galaxy S7 and Galaxy S7 Edge, finally start to roll out. There’s also a major new software release now available in the form of Herobound: Gladiators.

This brand new entry in the Herobound franchise was mentioned in passings by Oculus VR just a few weeks ago, so it’s surprising to see it suddenly appear on the Oculus Store. Herobound: Gladiators is the first multiplayer entry in the franchise in which four players will team up to fight goblins and demons in one of 16 arena-style areas. The title will support integrated voice chat with other players, who will also appear as avatars resembling floating heads about the battlefield on which they control a character.

Over 30 types of enemies feature with six different playable characters. There are even four bosses and a progression system to unlock new abilities.  The experience is available for free.

This is the third videogame in the Herobound series, with Herobound: First Steps launching with the original Innovator’s Edition of the Gear VR back in 2014 and a sequel, Herobound: Spirit Champion, following on soon after. These first two titles were actually developed with the help of Gunfire Games, the team behind upcoming Oculus Rift exclusive, Chronos. It’s not clear, however, if the studio had a hand in Herobound: Gladiators. Like previous entries, a bluetooth gamepad is required to sample the experience.

Herobound: Spirit Champion is also on its way to the Oculus Rift, though it’s not yet clear if Herobound: Gladiators could do the same.