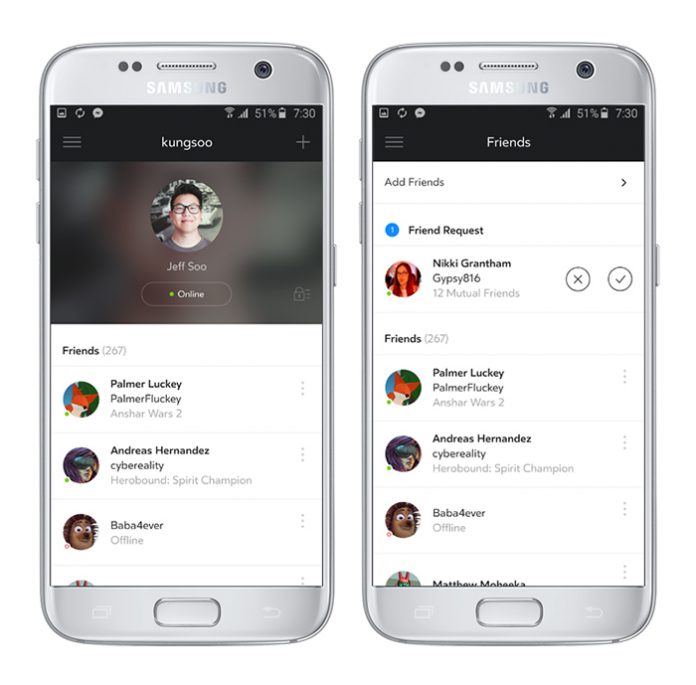 Back at the 2015 Oculus Connect developer conference last September, Oculus VR detailed a host of new features coming to its virtual reality (VR) head-mounted displays (HMDs), the Oculus Rift and Gear VR, as part of the Oculus Platform. These included the ability to create your own profile and link up with friends, as well as earn achievements and more. The first part of this plan was realised when Oculus VR launched its Oculus Concepts store on Gear VR late last year and, this week, the company is introducing more elements of the platform.

Starting tomorrow – one day ahead of the full launch of the latest Gear VR handsets in the Galaxy S7 and Galaxy S7 edge – Gear VR users will be able to use the Oculus app on their phone to create their own profile and then search for friends either by their real names or through Oculus usernames. Friends will be able to see who’s online as well as what titles people are currently playing. There will also be a mutual friends system to help you find others with greater ease, echoing systems previously established by social networking giant and Oculus VR parent company, Facebook.

It’s not clear if there’s a limit to the number of friends a user can have, though a screenshot of the system below shows the user in question to have 267 friends. Furthermore, Oculus VR will be introducing more detailed user reviews to Gear VR tomorrow, allowing people to actually comment on the content they use.

These profiles are expected to carry over to the Oculus Rift when the kit launches on 28th March 2016 so it’s not surprising to see them launch of Gear VR a few weeks ahead of the high-end device. There are still plenty of elements of the Oculus Platform to implement, however, and it’s not clear if aspects such as the promised achievement system will be making it in in time for launch.