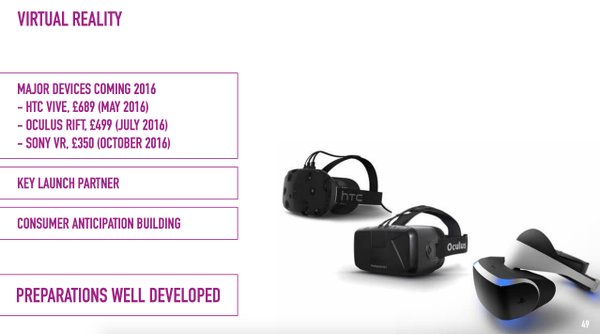 Today Kickstarter backers for the Oculus Rift started to receive their head-mounted displays (HMDs). Then later this week those who managed to get their pre-orders in quick enough during the 6th January launch should start to receive theirs. While for the HTC Vive pre-orders went live on 29th February and should start landing with consumers on 5th April. But what if you didn’t pre-order and wish to purchase from an actual bricks and mortar store. Well it seems retailer GAME may have an answer.

In a Tweet by VideoGamer.com editor David Scammell he posted an image from GAME’s recent half-year results presentation which looks to indicate when the retailer expects the HMDs to be available. The Oculus Rift should be arriving in July while the HTC Vive is due in May with the PlayStation VR in October.

Whether or not GAME will have actual units in these months hasn’t been confirmed by any of the manufacturers, but the dates for both the Oculus Rift and HTC Vive are the same as the current shipment dates for any new orders of the devices online. As this is when Oculus VR and HTC will have more units available, it’s possible some will be marked for retailers. As for the PlayStation VR, that’s some months away and being right before the Christmas period retailer stock is slightly expected.

VRFocus will keep you informed on any new updates relating to the HMDs hitting retail stores as news surfaces.