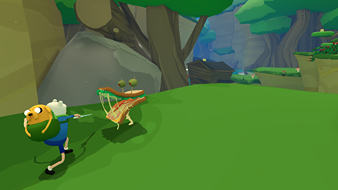 During 2015 Cartoon Network Games announced a collaboration with developer Turbo Button to create a virtual reality (VR) videogame based on its popular animated series, Adventure Time. It features Finn and his dog Jake on their travels; fighting monsters making friends and generally having a good time. The result of the two companies partnership was Adventure Time: Magic Man’s Head Games. The videogame initially released on the Samsung Gear VR head-mounted display (HMD), and now the title has made its way to Oculus Rift.

Adventure Time: Magic Man’s Head Games is designed as a fun, tongue-in-cheek videogame that doesn’t take itself seriously. Bright rich colours and bold design instantly greet you as the intro begins with the pair sat eating a picnic. As the camera comes in closer to them you can hear them talking, saying they feel like their being watched. Turning around they look at you, shocked to see you there before introducing themselves. It’s at this point the villain of the videogame appears, the titular Magic Man. He subsequently uses his magic to turn you into a giant floating balloon, giving you the camera angle you’ll be playing the title from.

From here Finn and Jake naturally take on the challenge of restoring you to your former self. Taking control of Finn, Jake jumps into Finn’s backpack to provide further  attack and movement options further into the story, similar in fashion to the 64-bit entries in Rare’s beloved platform series, Banjo-Kazzoie. Armed with a sword the duo fight through evil sandwiches and gnomes, looking for jack-in-the-box collectables littered across the levels. While Finn’s sword provides the base attacks, it’s Jake that gives you access to heavier attacks, with a jumping ground pound and a swiping fist that stuns enemies. Finn also provides a long range grapple and parachute to get to those hard to reach platforms.

For the basic design that Turbo Button has gone for with Adventure Time: Magic Man’s Head Games it’s an enjoyable title to play. The camera works well for the platformer, players should find it comfortable to play as the camera follows Finn; giving a wide enough viewpoint to look for secrets whilst jumping between ledges. Controls are fluid and precise enough that the levels shouldn’t present to much difficulty. 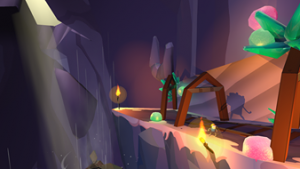 But it’s the difficulty and length of Adventure Time: Magic Man’s Head Games that present the main issues. The title is aimed at kids, but as most players will be adults it’s unlikely that they will find the level of enemy aggression tasking, flying though the short videogame in no time. You want it to be longer as it is fun to play, but over way too quickly with little longevity after you’ve found all the secrets.

Adventure Time: Magic Man’s Head Games is a great little title to blast through in an hour or two, with the VR-centric design showing great promise. The humour present throughout gives it charm, it’s just a shame it couldn’t have been a little longer; just one more level maybe? And adding a few more enemy types wouldn’t have hurt the appeal for more experienced gamers.