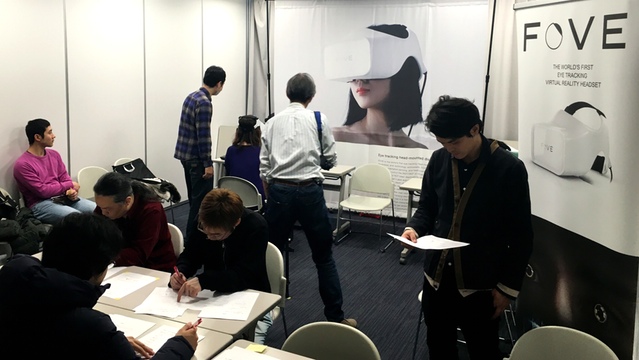 The first month of 2016 has been a busy time for the virtual reality (VR) industry. CES took place in Las Vegas, Valve had its Steam VR Developer Showcase, Oculus VR launched pre-orders for Oculus Rift and so much more. But not a great deal has been heard from FOVE, the headset manufacturer those device also includes eye-tracking. That’s not to say the company hasn’t been busy as it reveals what been going on in its January newsletter.

FOVE completed a successful Kickstarter crowd-funding campaign last year, and has now shipped pins to the $15 USD backers and t-shirts to the $20 USD backers. Earlier in January VRFocus reported on the company revealing its latest headset prototype, and now FOVE has completed a user test to validate the new design.

Next the Creative Director explained the work that has gone into creating the compositor, saying: “A compositor isn’t at all a normal 3D application. In some ways it’s simpler than a full 3D engine (no need to juggle light maps, multitexturing, mesh animation, etc…) and in other ways it’s more complex. For instance, it was exciting to learn about shared Direct3D textures and figure out how to transfer output from an engine (e.g. Unity, Unreal, CryTek) to the compositor system (which runs in a separate process so that if your game crashes it can fade out smoothly without dumping you unceremoniously back to a blank screen).”

The firm has also announced the opening of a new office in Los Angeles, to work on software development and a portion of R&D. FOVE also has offices in San Francisco and Tokyo.

FOVE still lists a launch date of 2016, and VRFocus will continue to follow any further announcements as development continues.