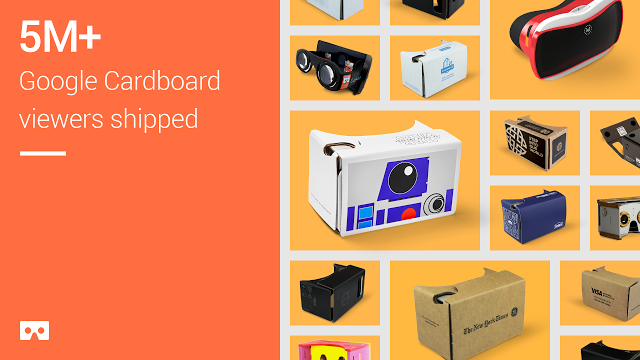 Back in 2014 search engine giant Google shook up the virtual reality (VR) landscape with the introduction of Google Cardboard. This shockingly simple concept iterated on the already well-established idea of using a smartphone for VR experiences by showing people how to make a head-mounted display (HMD) to house that phone mainly out of household materials. Since its launch Google Cardboard has had a huge impact on this young industry. Today, Google itself is proving that with some impressive stats about the initiative.

A new Google Blog post has revealed that some five million Google Cardboards have been shipped. As the image above shows, this will include the countless third-party iterations of the device that have been created under the ‘Works with Google Cardboard’ banner. It’s not just Google making these sets; Mattel created a new version of its ViewMaster toy that came under this label while others have made sets to accommodate different sizes of smartphones, improve comfort, add features and much more.

Elsewhere, the company announced that there have been over 25 million installs of Cardboard compatible apps on the Google Play store. It’s not clear if this figure includes apps such as YouTube that support the device but don’t require it, though. Also revealed were the Top 5 supported apps based on installs, user rating and reviews. Number 5 goes to Proton Pulse from ZeroTransform, 4 to Caaaaardboard from Dejobaan Games, 3 to Lamper VR: Firefly Rescue from Archiact Interactive and 2 to the Vrse app containing a series of 360 degree films. The winning app? Ryan Bousfield’s Chair in a Room.

Finally, over 350,000 hours have been spent watching YouTube VR videos, more than 750,000 VR photos have been taken through the new Cardboard Camera app, and over 500,000 students have used the Google Expeditions concept, taking them to other places from the comfort of the classroom.

“While you’ve been traveling the world and beyond with Cardboard, we’ve been on a journey, too,” Google’s VP of Virtual Reality, Clay Bavor, concluded in the blog. “Keep your eyes peeled for more projects that bring creative, entertaining and educational experiences to mobile VR.”

For the latest on Google Cardboard and all other HMDs, keep reading VRFocus.