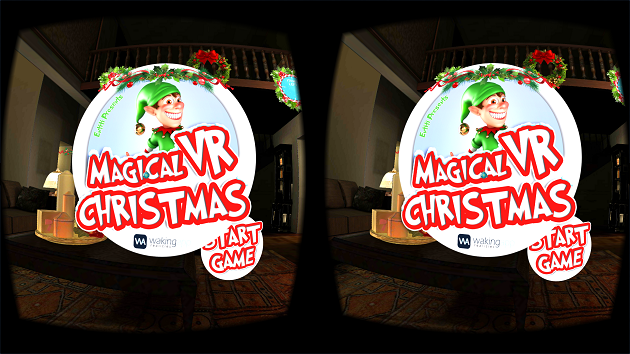 Back in November, Israeli-based startup WakingApp announced the raising of $4.3 Million USD in Series C funding led by Chinese tech companies. Now the company, which provides of tools for quick and easy creation of augmented reality (AR) and virtual reality (VR) content, has revealed a new VR experience for the festive season. Launching today is Magical Christmas VR for mobile through WakingApp’s ENTiTi Viewer application.

Using an Android or iOS smartphone along with a Google Cardboard or similar head-mounted display (HMD), the Magical Christmas VR experience allows users to add their own photos into the VR environment and then race against the clock to save Christmas, all simply by looking at items in the viewer.

“Magical Christmas VR is a fun experience for anyone who has a virtual reality viewer and is looking for new content to not only watch, but also customize,” said Alon Melchner, founder and president of WakingApp in a statement. “It serves as an introduction of what can be done with our ENTiTi Creator as people look to bring their own virtual reality ideas to life.”

“Virtual reality smart glasses are going to be under the Christmas tree in 2015, but there’s still a shortage of content to watch, as well as a lack of creator tools that anyone can use,” adds Udi Shani, CEO of WakingApp. “By next winter, we won’t even need to create another Christmas VR; the community will already have done it.”

Magical Christmas VR was created by the WakingApp studio using the soon to be released ENTiTi Creator, an AR/VR content creation platform enabling anyone to create content. From professionals to home users who are interested in VR or AR, software is designed for those without previous programming knowledge.

VRFocus will continue to follow the latest progress on WakingApp’s projects, reporting back with any further updates.