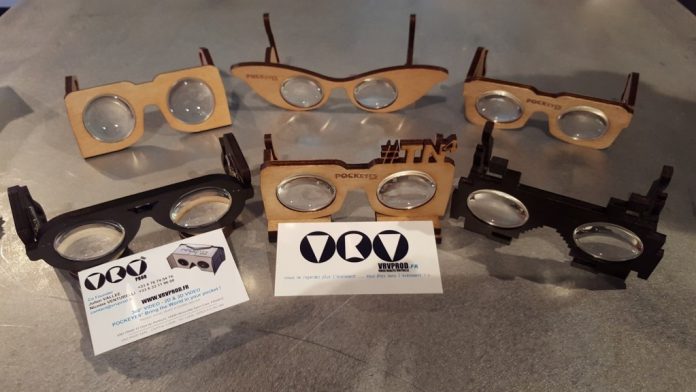 In January VRFocus reported on French startup VRV Prod revealing its design for a collapsible version of Google Cardboard, called POCKEYES. The company then showcased the product at the Consumer Electronics Show (CES) 2016 in Las Vegas for the first time. Now VRV Prod has announced a new addition to its line-up in the form of POCKEYES Premium.

Keeping with the foldable theme POCKEYES Premium upgrades the cardboard structure of POCKEYES to materials similar to wood, giving the head-mounted display (HMD) a more durable appeal. As with the original device 37mm lenses are standard and the HMD can be customised by businesses looking at branding opportunities. The actual look is different, with a similar design to a pair of glasses, albeit with the arms out in front to hold a smartphone.

VRV Prod have yet to reveal when POCKEYES Premium is likely to become available to consumers. POCKEYES can currently be purchased through the French Amazon site for €12.50 EUR.

The portable VR market is newly emerging, allowing consumers to take HMDs out and about without having to carry a bulky item. The Samsung Gear VR for instance is mobile, but certainly not small enough, or pocketable to take everywhere. Another portable design came by way of Figment VR which had a successful Kickstarter crowd-funding campaign towards the end of 2015. For its design the company built a pair of lenses into a iPhone case, adding a alternative dynamic to portable VR.

VRFocus will continue its coverage of VRV Prod and its POCKEYES range, reporting back any further announcements.