Cloudhead Games’ The Gallery: Call of the Starseed is one of a handful of HTC Vive compatible videogames that has an important responsibility: to introduce players to the concepts, capabilities, and limitations of Room Scale VR. That’s why, when showcasing the event at PAX Prime 2015 in Seattle, Washington, the developer built a tutorial experience that let you acclimatise to being able to walk around and enjoy hand-presence with position-tracked controllers before heading into the main demo. For an experienced VR user, though, this section was more of a playground than a classroom.

To help you (quite literally) grasp The Gallery: Call of the Starseed‘s interactive objects, Cloudhead Games positioned glass bottles around an empty space. The idea was to move towards the surface on which a bottle rests, pick it up and do practically whatever you want with it. In my case, a lifetime of playing videogames had taught me one basic instinct: turn it into a weapon. Somewhat embarrassingly, then, my first move was to pick the bottle up by its neck and attempt to smash the end of it on a table. It didn’t work, but Cloudhead Games told me that it was something they were planning to add later on.

Disappointed that my ‘weapon crafting’ had proved fruitless, I carelessly tossed the bottle behind me, hearing it smash on the floor. To complete the tutorial, I needed to interact with the other bottles, so I turned and made my way to the next surface.

It was only a short journey, no more than a few steps, but something remarkable happened in those moments. Rather than confidently striding over to the next goal to trying and juggle the bottle over my head (which was possible), I found myself jumping in surprise, making a sheepish back step and pausing for a moment. Why had I stopped? Because I’d noticed I’d almost stepped in glass. The remains of my failed weapon were gathered in a small pile on the floor, and if I stepped on them then surely I would cut my foot and spend hours painfully picking shards out.

Except, as soon as I paused to look at the virtual heap, I knew that wasn’t going to happen. I even laughed to myself and shook off the slight feeling of amateurism that had started to grow. 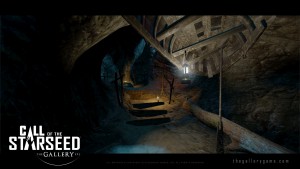 But it’s not the moment in which I realised I wasn’t in any danger that’s important. It’s that fraction of a second where my body sent me the very real signal to stop in my tracks and make sure I didn’t harm myself. It was the exact kind of reaction I’d have had in real life to noticing danger out of the corner of my eye. If you ever needed a single instance to prove that VR was the real deal, it’s this; tricking my brain into believing in virtual danger, however unintentional, and making me act accordingly.

That VR can fool you even for that split second is nothing short of incredible, and anyone that’s owned a development kit or had the chance to experience one of the tech’s better videogames will know what I’m talking about, but the accidental nature of this instance gave it an even bigger impact. In The Deep, your close encounter with a shark is scripted, every jump scare in VR horror so far has been planned. Here, I was reacting to a peril of everyday life that I myself had caused. I’ve never done that in a videogame before.

All the more impressive was that, for that rest of the tutorial, I couldn’t shake the knowledge that the glass was still in the room. Yes, I knew it wasn’t real, but my brain refused to simply forget about it at the same time.

That demo was filled with a number of memorable events; firing fireworks in any direction I saw fit and trying to knock a box off of a shelf by throwing items at it were also incredibly immersive. But it’s that one moment with that patch of glass that’s stayed with me the most and one of the reasons I’m looking forward to showcasing The Gallery: Call of the Starseed to new VR users when it launches alongside the HTC Vive in April. If a pile of broken glass made me jump, imagine what it will do to them.

The post VR Moments: How The Gallery Showed Me VR Is Lightning In A (Broken) Bottle appeared first on VRFocus.