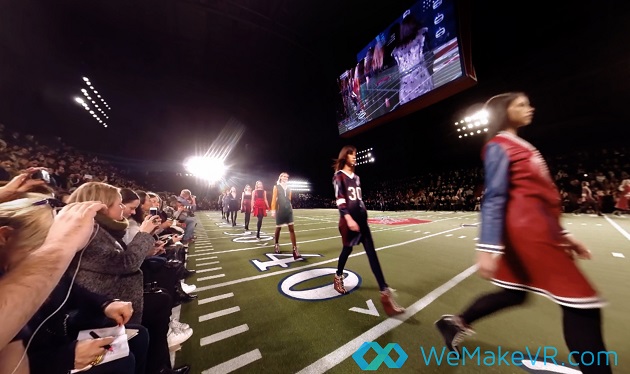 Fashion brands are starting to show an interest in virtual reality (VR) technology as a way of creating further exposure for the company. Rebecca Minkoff filmed its Fall 2015 show in VR, with help from VR production company Jaunt, and now Tommy Hilfiger has teamed up with WeMakeVR to create a VR runway show experience.

Yesterday WeMakeVR launched the “Fall 2015 ‘Hilfiger Collection’ VR experience,” at the brands store on 5th Avenue in New York City. Customers going into Tommy Hilfiger will be able to experience the show from VIP-seating, as well as get a glimpse behind the scenes of the Fall 2015 Hilfiger Collection. Also offered is the unique opportunity to experience the fashion show backstage, an experience typically inaccessible for individuals not involved in the show’s production, all in three-dimensional, 360-degree VR. Following the New York launch additional locations will also showcase the experience including London, Paris, Milan, Amsterdam, Dusseldorf, Florence, Zurich and Moscow.

“When we presented our technology and our vision to Daniel Grieder, Tommy’s global CEO, he instantly recognized the potential of our collaboration. He understood WeMakeVR is not just about the technology, but about applying it in a way that adds value beyond the initial wow-factor,” said Avinash Changa, Founder and CEO of WeMakeVR. “It’s a pleasure to work with Daniel and his team, WeMakeVR and Tommy believe VR will be a great tool for the fashion industry.”

Chanda adds: “Users get an incredible peek behind the scenes; they stand next to models right before they walk out onto the runway, and they feel the excitement of being backstage after the show.”

VRFocus will continue to follow the latest updates from WeMakeVR, reporting back any further announcements.