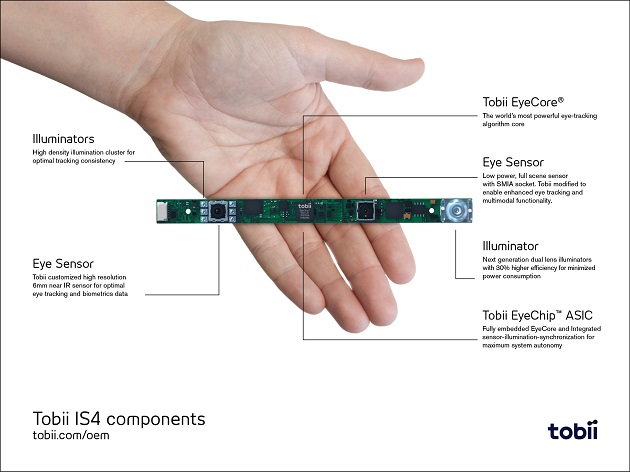 Swedish eye tracking company Tobii recently announced IS4 eye tracking platform and Tobii EyeChip. The products have been designed to integrate into a wide variety of devices, allowing eye tracking to be added to desktop and laptop computers, tablets, cars, virtual reality (VR) head-mounted displays (HMDs) and much more.

“After several years of R&D and nearly $15M in investment, the IS4 platform, and especially the EyeChip, mark a tremendous milestone for Tobii,” said Oscar Werner, president of Tobii Tech in a statement. “These new products let us empower the world’s leading OEMs with the world’s best eye tracking for consumer devices and, together, bring consumers truly exciting and revolutionary experiences.”

The IS4 eye tracking module has the EyeChip built in, and has been designed to be cost effective and compact for all eye tracking requirements. Both units are now available for OEM pre-order through the Tobii Early Access Program. The program is now accepting registrations from qualified system integrators and OEMs.

Tobii revealed last month a collaboration with Starbreeze Studios to bring its technology to the StarVR HMD, one of the few to feature to technology. VRFocus will continue to follow the latest news on eye tracking tech relating to the VR industry.

The post Tobii Has Unveiled its Next Generation of Eye Tracking appeared first on VRFocus.