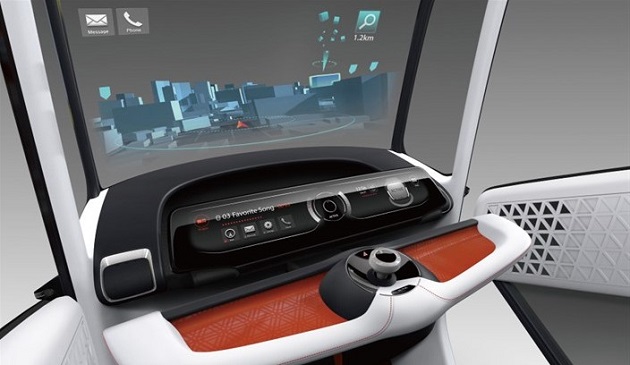 Having previously reported on augmented reality (AR) technology being unveiled by Mitsubishi being built into its eX Concept, VRFocus has now learnt fellow Japanese car manufacturer Honda is also using the technology. Honda will be officially unveiling a compact concept car at the 44th Tokyo Motor Show 2015 with AR built into the windscreen.

Called the WANDER STAND, the concept car can seat two people, has swinging doors and a joystick for control of the vehicle reports psfk.com. But a stand out feature is its AR windscreen. As with other similar concept designs, imposed in the drivers view is useful information to help the driver navigate. The windscreen displays 3D models of buildings, speed, distance and in the image there is also messaging and phone symbols.

As well as AR and virtual reality (VR) is also being used by a number of different manufacturers, American car maker Ford using VR to help in its production, with its Ford immersive Vehicle Environment (FiVE) Lab.

The 44th Tokyo Motor Show takes place between Friday 30th October to Sunday 8th November 2015, with tickets still available. VRFocus will continue to follow all the latest news and announcements on AR, reporting back any further details.