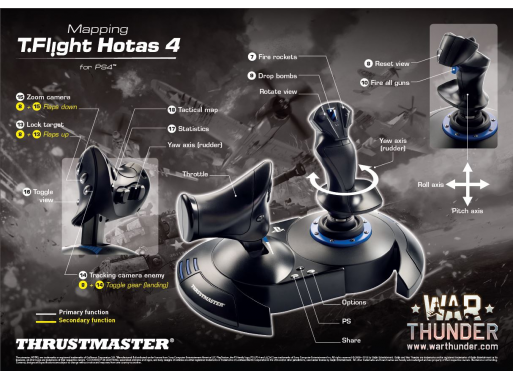 As any virtual reality (VR) fan will tell you, you can have the perfect experience with the technology right now, you just need the right equipment. For driving videogames, for example, all you need is a compatible steering wheel and you’re good to go. For flight simulators, a flight stick is the best possible solution. If you’re planning on picking up the PlayStation VR head-mounted display (HMD) for PlayStation 4 when it launches later this year, then, you might want to pay attention to the T.Flight Hotas 4.

This brand new product from Thrustmaster is the first ever PlayStation 4 compatible flight stick and is officially licensed as such, though it’s also compatible with PC. It features adjustable stick resistance and a full-size detachable throttle as well as a dual rudder system. It comes kitted out with PlayStation-specific buttons too, such as the Options and Share buttons. A detailed image of the button mapping for the kit can be seen above, which also reveals a partnership with one PlayStation VR compatible videogame.

Every unit of the T. Flight Hotas 4 that’s sold comes with a Starter Pack for War Thunder, Gaijin Entertainment’s World War 2-era online action title that set to include support for PlayStation VR later down the line. This pack includes the XP-38G Lightning Plane as well as a premium account for seven days and 500 golden eagles. With both PlayStation 4 and PC compatibility, then, this stick is well worth the consideration of VR fans interested in the genre. It’s available to buy for $69.99 USD.

Check back with VRFocus for the latest on VR compatible accessories.