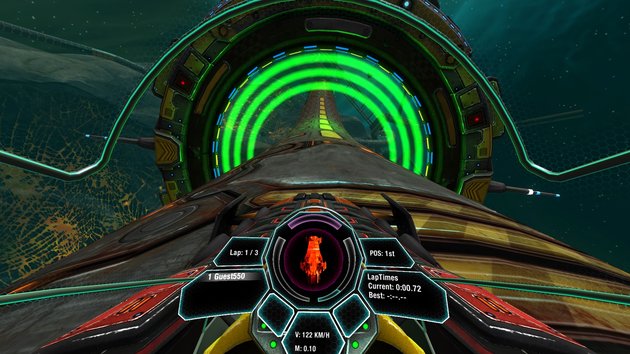 Few developers have thrown themselves into the virtual reality (VR) deep end like UK-based Tammeka Games has. For well over a year now the studio has been working on anticipated sci-fi racing title, Radial-G, for the Oculus Rift head-mounted display (HMD), with other support on the way. In that time, it’s also helped to release several mobile VR experiences including a spin-off of Radial-G itself. It appears that the developer has plenty more plans for the technology too, as it recently teased it was ‘onto a winning VR idea’ for a possible social experience.

The team’s Sam Watts teased as much on Twitter earlier this week. “Today we brainstorm social, touchy VR experiences,” Watts first wrote. He later followed with: “Brains were stormed. Ideas were had. Some were dismissed, others fleshed out. Think we’re onto a winning VR idea here.” The developer hasn’t yet offered any other hints as to what this experience might be, nor which HMDs it might be bringing it to. That said, with the team still working on the full release of Radial-G and this idea still very much in the conceptual stage, don’t expect to see it for a while.

As for Radial-G itself, the title is currently available in pre-release form via Steam’s Early Access system. Tammeka Games had originally planned to release the full version earlier in the year but now appears to be holding out for the launch of HMDs over the course of the next few months. Along with the PC version the developer also plans to bring the title to the Xbox One and PlayStation 4, the latter version of which will look to support the PlayStation VR HMD.

VRFocus will continue to follow Tammeka Games’ work in VR closely, reporting back with the latest updates on its progress.

The post Tammeka Games ‘onto a winning VR idea’ appeared first on VRFocus.