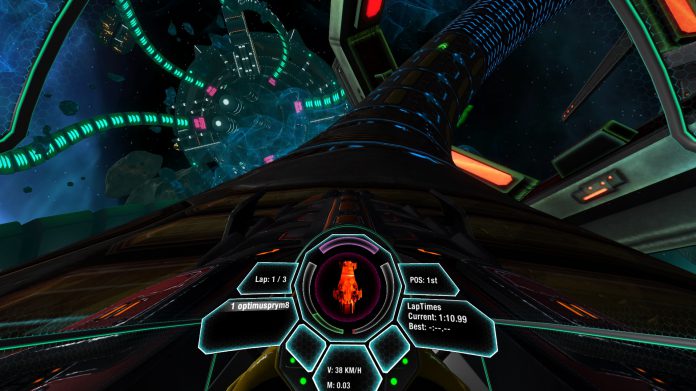 Tammeka Games has recently announced the course of action it is going to take over the next year in order to expand and flesh out its flagship virtual reality (VR) racer, Radial-G, including additions of ships, tracks, and “Top Secret Awesome Stuff”. There has now been a confirmation that the title will not only be sticking to the Oculus Rift head-mounted display (HMD) and is planning to make its way over to the PlayStation VR in time for its launch in October.

The announcement came from Twitter when the official Radial-G account replied to a question about the possibility of the title coming to console in the near future, saying “We’re aiming for PSVR launch window”, which will come about at the end of the year in October. Sam Watts of Tammeka Games spoke to VRFocus in light of the comment to confirm the news: “Now that the PC version of the game is fully released out of Steam Early Access and on the Oculus Store, we are concentrating on future gameplay features and content, all of which will feed into the v1.0 version of the PlayStation VR release of the game, expected within the launch window of PSVR, giving console owners a fuller experience on Day One.”

The makers of Radial-G have also helped McDonalds launch its campaign, Follow Our Foodsteps, to give consumers an idea of how the Big Mac makers produce its food from the fields to the restaurants by going on a roadshow, showcasing two VR videogames, one of which takes the player on a tractor ride in order to harvest potatoes, and the other is a 360-degree film which takes viewers behind the scenes of the supply chains.

Check back with VRFocus for the more on Tammeka Games’ developments latest updates and news in the world of VR.