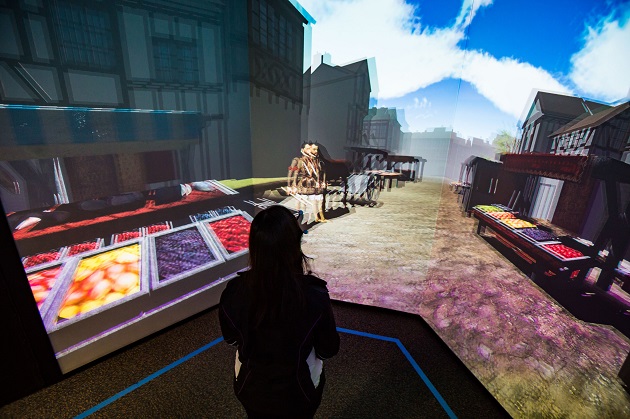 The immersive qualities of virtual reality (VR) lend themselves to many applications. Aside from videogames VR is a great tool for learning, history in particular, as you can be enveloped in the past seeing the re-creation of historic buildings and civilisations. And this is what the students at Florida International University (FIU) have done, transporting viewers back to 1598 London, to view one of Shakespeare’s plays at the Globe Theatre.

In this virtual world you’ll walk down the bustling dirty roads of London, past the houses and markets and into the theatre to watch the first few minutes of the opening monologue of Henry V.

The experience has been created by FIU students from a variety of disciplines, architecture students built 3D models of 1598 Bankside. Computer science students programmed interactions that occur between the user and environment, while theatre students brought the characters to life with voice acting.

The VR experience will be shown inside the campus’ I-CAVE, short for Integrated Computer Augmented Virtual Environment, a facility composed of five high-resolution screens. Given a control pad and VR glasses, visitors can then navigate the VR space.

“The goal of the project is to recreate the experience of what it must have been like to see a play in Shakespeare’s era,” said David Frisch, the project manager in a statement. While some creative liberties were taken the team did try to stay historically accurate to the location and attitudes: “It was loud. It could get rowdy and crazy, and people would throw tomatoes at performers during plays,” added Frisch.

Shakespeare’s London can be viewed until 29th, February 2016, and is the first of a series of campus events.

VRFocus will continue to bring you all the latest VR news as details are announced.