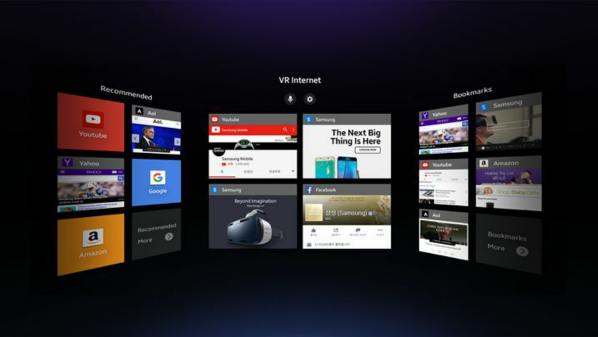 Last month saw Oculus VR and Samsung finally launch the consumer version of the Gear VR mobile-based virtual reality (VR) head-mounted display (HMD), with an international rollout also now taking place. As a result, the past few weeks have seen plenty of new content come to the device, both in the form of videogames and other kinds of experiences that are enhanced by VR. This week’s latest release definitely fits into the latter category, as Samsung itself has launched a Beta for an internet browser for the device, simply titled Samsung Internet.

As with other media apps such as Gear VR’s Netflix solution, Samsung Internet allows users to browse 2D content within an immersive environment. With VR, it’s possible to visit pages on a massive screen. The company has integrated staple features from other internet browsers such as Quick Access, Bookmarks and a Tab Manager, while also providing an on-screen keyboard and voice input to make navigation as easy as possible. A ‘Gaze Mode’ in which users can simply look at the menus they want to select will also feature.

Crucially, the browser will also let people view spherical 360 degree content and 3D video, separating it from browsers on a standard monitor. A full version of the experience will be revealed in early 2016, while the current version is available to download for free. Samsung Internet is one of a number of official applications that Oculus VR and Samsung have released onto the device recently. Last month the former also launched Oculus Social, an experience that allows friends and strangers to meet up online and share content and more.

Plenty of other Gear VR experiences will be releasing in the coming weeks and months as the device reaches a wider audience. VRFocus will be covering all of these titles and more.