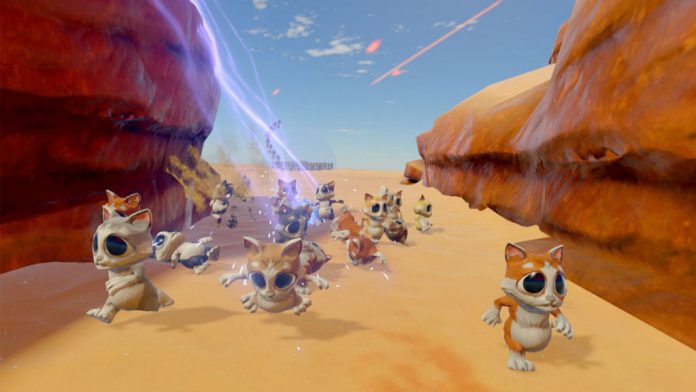 The human race has an obvious weakness. The vast majority of our species love animals, often choosing to not only invite them into our homes but also treat them as equal to – if not better than – other members of our families. Many of our ‘pets’ already understand this situation and often use it to their advantage, but what if this ran deeper? What if those cats and dogs banded together to form a revolution? What if those pets were actually a superior race from outerspace who have been spying on us all along, waiting for the right moment to strike?

Kittypocalypse’s premise is tied to a suggested love of cats, and the alien kitten invasion that follows. The one-dimensional story makes about as much sense as the videogame itself, striking down alien kittens who explode in a small shower of green blood as your giant guns eliminate them one-by-one. Yes, Kittypocalypse is a tower defence videogame, and sadly the storyline is the only original thing about it.

Following the genre formula to the letter, Kittypocalypse puts the player in charge of a battalion of deployable turrets which can only be positioned at select point on each map. Prior to beginning each mission that player is shown the route the enemy kittens will take in order to reach your base, and once enough of them have taken cover within it’s game over. The player must deploy their turrets at the aforementioned specific locations in order to prevent the kittens from reaching their base, earning more finance for additional units as they progress through successive waves in each mission.

The turrets at the player’s disposal are all familiar – lasers, gatling guns, rocket launchers – though once some progression has been made upgrades will be unlocked also. Variety in the gameplay arrives more than halfway through the campaign but is wholly welcome when it does; the primer for the player’s own opportunity to use the knowledge they’ve learnt significantly overstays its welcome. It could be suggested that prior to this it’s the secondary objectives that will challenge the player, which may be true, but they too follow the all-too similar pattern of ‘only deploy X amount of turrets’ or ‘concede no more than X amount of damage’.

Playing on cuteness is not an unwelcome idea, but it has to be founded on something more than this in and of itself. Kittypocalypse is not, even when considering its skirmish gameplay mode. This could’ve been the videogame’s saving grace – a showcase of the mechanics used in the campaign offering a greater level of freedom to the player – but instead it is simply the campaign missions playable again without any rewards for endurance. 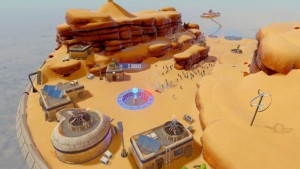 And ‘endurance’ is the perfect word. Kittypocalypse is a shamefully shallow experience. It’s a forceful recreation of a tired formula that is already outdone by many competitors in the VR videogame scene, including on less powerful hardware such as the Samsung Gear VR. It’s a real shame, as Kittypocalypse could have – and should have – aspired for better things. Aiming for mediocrity is never going to set the world on fire.