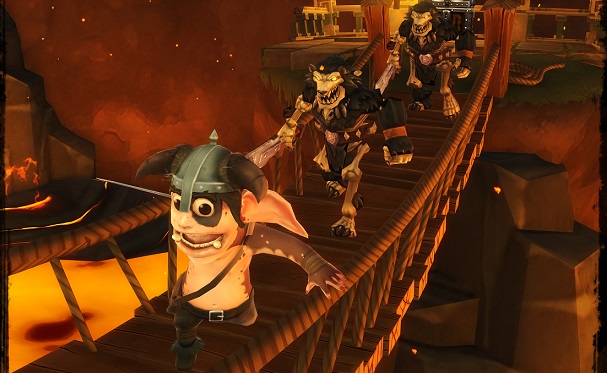 The second Oculus Rift launch title developed by Gunfire Games, alongside the highly recommended Chronos, Herobound: Spirit Champion is actually an adaptation of a Samsung Gear VR release. The sequel to Oculus VR’s own Herobound: First Steps – though perfectly pitched as a standalone title without the need to have any knowledge of the original – Herobound: Spirit Champion is an adventure videogame that puts the benefits of virtual reality (VR) gaming to very good use.

The story of Herobound: Spirit Champion is typical adventure videogame fodder. Five spirits used their powers to form the world and everything within, but one spirit didn’t like the domain he had to reside in. The spirit of fire waged war against the spirits of earth, air, water and life, defeating them and harnessing their powers to create guardians to protect his ill-gotten gains. Of course, any videogame player worth their salt will recognise that this means Herobound: Spirit Champion will see them venturing though each land and defeating each of these guardians.

The gameplay, just as the storyline closely mirrors many of those from The Legend of Zelda franchise, is a homage to one of Nintendo’s most beloved series. The camera angle (the player’s viewpoint) is similar to that of all 2D episodes of The Legend of Zelda since the 16-bit genre-defining The Legend of Zelda: A Link to the Past. However, here the player is able to pivot and zoom through the use of the Oculus Rift’s headlook functionality. It’s just a shame that your unnamed troll hero doesn’t react to such invasive actions in a similar fashion to Playful Corp.’s Lucky.

The gameplay follows suit, mixing exploration with lighthearted combat and logical puzzle solving: hitting switches, moving blocks and gaining new items capable of revealing new routes to follow. Each dungeon unfurls in front of the player as they continue to progress through it. Though strikingly similar to Nintendo’s design plan, Herobound: Spirit Champion is an enjoyable experience in it’s own right.

The most significant differences between Herobound: Spirit Champion and the 2D The Legend of Zelda outings are mechanics that have been liberated from the 3D editions of the franchise. The roll manoeuvre and combo system feel like they have literally been reverse engineered from The Legend of Zelda: Ocarina of Time and pasted directly into Herobound: Spirit Champion. For fans of Link’s adventures this is no bad thing, of course. 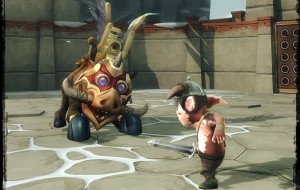 Herobound: Spirit Champion does have a few unique ideas of its own, but these are relatively minor compared to the liberal ‘borrowing’ from Nintendo. The aiming of the bow being central to the player’s view opposed to connected with the character, the ability to control your on-screen avatar at one end of a room while looking ahead to plot a course of progression, and the translucent menu system: these are simple and intuitive design decisions that single Herobound: Spirit Champion as a unique VR-only experience.

The visual design of Herobound: Spirit Champion is clearly hamstrung by its Gear VR roots. While far from offensive, the environments are decidedly bland and the character effects/animation are significantly lesser in quality than that seen in other Oculus Rift launch titles. The sound quality is also limited, with a wonder whether there was ever any consideration to make use of the Oculus Rift’s typically hugely impressive head-related transfer function (HRTF) audio system.

Herobound: Spirit Champion is an enjoyable adventure here on Oculus Rift just as it was on Gear VR, however it is of course significantly less impressive on the high-end VR hardware. The budget price-point will convince some to dive in and few are likely to be disappointed with the gameplay, but you can’t help but feel that Herobound: Spirit Champion would have been considered an entirely different proposition had the visual and audio qualities been improved upon.